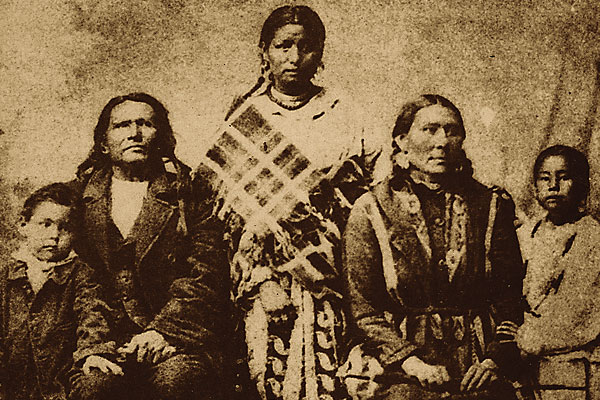 “Yes, we have Standing Bear, too” Betty Davis tells me when I spy the photograph of the legendary Ponca chief at the Douglas County Historical Society in Omaha, Nebraska.

Yeah, well, everybody knows that, or should. But then I think … well, Ponca City, Oklahoma, has him, too.

Okay, Ponca City has a 22-foot-tall bronze statue sculpted by one of the great Western artists of our era, Oreland C. Joe, who isn’t a Ponca but a Navajo-Southern Ute, and doesn’t live in Oklahoma or Nebraska, but New Mexico. Yet the statue, in the 63-acre memorial park named after the great chief, is impressive.

The bronze Standing Bear, with his right hand raised, looks over the Arkansas River valley. In Omaha, however, just next door at the General Crook House museum at old Fort Omaha, the bronze statue isn’t one of Standing Bear. It’s of George Crook, and he isn’t standing, looking regal, but sitting in a chair, looking like, well, George Crook.

Yet that’s appropriate, too. Crook and Standing Bear joined forces in Omaha, and the trial of 1879 resulted in a legal precedent for Indian rights.

Of course, too many people overlook Standing Bear in Ponca City. They come to this great city, founded in 1893 with the opening of the Cherokee strip, to pay tribute or learn about the legendary 101 Ranch, which once covered 101,000 acres and had a Wild West show that entertained zillions of folks worldwide. Or they come to see the Marland mansion or the Pioneer Woman Museum. But poor Standing Bear….

Well, it’s not like they’re celebrating the Ponca leader in Omaha, either. Too many distractions what with the Joslyn Art Museum, Henry Doorly Zoo (among my favorite zoos in the country) and the College World Series. Oh, there are great steaks, too. Omaha knows steaks like Kansas City knows barbecue. It knows history, too, but Standing Bear gets shortchanged—kinda like my alma mater, the University of South Carolina, at the College World Series. Half the time, the Gamecocks shouldn’t even bother getting off the bus. But I digress….

If I were mayor, I’d have Standing Bear Days once a year in Omaha. And in Ponca City, too.

We remember the flight of the Nez Perce, the heartbreaking Cheyenne Autumn and the Trail of Tears, but somehow Standing Bear gets lost in the crowd. He led his people on a tragic journey from the Ponca reservation in Indian Country to Nebraska, but Crook caught him and took him to Omaha (he camped outside the General Crook House).

While waiting to be returned to the reservation, Standing Bear—with Crook’s encouragement and blessing—filed a writ of habeas corpus, demanding his release … unheard of in 1879. Journalist Henry Tibbles and attorneys John Webster and Andrew Poppleton joined Standing Bear’s legal fight, and in the upset special in Omaha history (even topping last year’s College World Series), Judge Elmer Dundy ruled for the Ponca chief. Thus, Standing Bear became the first Indian recognized as a person in the eyes of a law.

Maybe that’s not as dramatic as Sitting Bull at the Little Bighorn, or Cochise at Apache Pass, or Chief Joseph at the Bear Paw Mountains, but it’s a big deal. Yet when I “google” Standing Bear, I get 55,500 hits. Crazy Horse gets 768,000. Geronimo, 1.39 million. Get the picture?

At least Standing Bear gets his due at old Fort Omaha. They have him, as Betty Davis says. Maybe, one of these days, Standing Bear will at least get a statue, too.