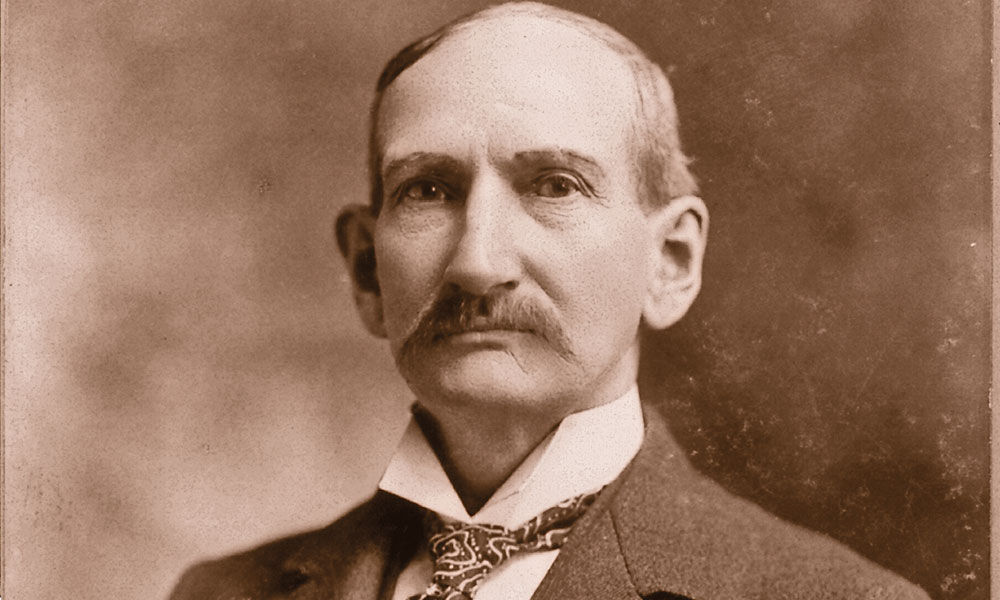 While we generally think of the Wild West as the era of the revolver—and it certainly was—the last decade of the 19th century and the dawning of the 20th century saw the debut of the automatic pistol. Early autos like the Borchardt (1893), “Broomhandle” Mauser (1896), Luger (1900), and early 1900s Colts had become available and a small number were finding their way into the hands of Westerners. Men who had made their reputations with six-shooters were taking notice of the new semi-auto handguns and a few started packing these slab-sided auto pistols.

Notable frontier figures Bat Masterson and Buffalo Bill Cody and some lawmen owned auto pistols. One former outlaw, who, ironically, started his lawless career with percussion revolvers, chose a semi-auto sidearm for protection in the early 1900s. He was none other than Frank James, the older brother of the infamous Jesse James, and former Confederate guerilla raider, train and bank robber, and deadly member of the notorious James-Younger gang of the 1860s and ’70s.

Although Frank James had been living the straight and narrow life for years after his 1883 acquittal for robbery and murder, by 1904 circumstances required his packing a gun once more. What this ex-rebel raider chose as his last sidearm was a 1903 Colt Hammerless Pocket Auto in .32 ACP (Automatic Colt’s Pistol) chambering.

Introduced in 1903 as Colt’s second pocket auto, but its first automatic with a concealed hammer, the handy little handgun was called the “Model M,” and ad vertised as a nine-shot automatic with a magazine capacity of eight rounds, plus one in the chamber. It was also promoted as an ideal hideout pistol since it was “flat like a book in the pocket.” Another John Browning-designed pistol, the 1903 Hammerless traced its design principles back to Browning’s patent of April 20, 1897, and to December 22, 1903,which covered the concealed hammer design. While barrels on the first 71,999 guns measured four inches, all models after that had 33⁄4-inch barrels. With the exception of the later-produced military models, there was no magazine safety.

Standard finish on the .32 Hammerless was blue, although other coverings were offered. Grips varied throughout production, with three types of hard rubber Colt logo’d panels used up through 1924. Later, checkered walnut with the Colt medallion adorned those up through 1945. Few guns in Colt’s history can boast of the production numbers of the 1903 .32 Hammerless with a total of 572,215 manufactured between 1903 and 1945.

In 1904, while Frank James and fellow ex-gang member Cole Younger were promoting “The Great Cole Younger and Frank James Historical Wild West Show,” trying to run it as an honest business, the owners had ideas of their own and brought in gamblers, con men, grifters and other lawless types. Concerned about the thugs the bosses were bringing with them, and after an attempt by the owners and managers at strong-arming the two former outlaws, Frank and Cole quit the show amidst a quarrel where threats were made and guns were drawn. From then on, both James and Younger “went heeled” once again.

Afterward, Frank went on a lecture tour and, while in Butte, Montana, later that year, a man who supposedly a relative of a cashier killed in the 1876 Great Northfield Raid, threatened to kill Frank James. Not one to shirk a fight, James armed himself with the 1903 Colt Hammerless. When the local authorities asked Frank to leave town, the old outlaw replied, “I will go when I am ready.” Fortunately, the would-be shooter, who was armed with a .45 caliber wheelgun, was subdued before Frank arrived at the theater where he was speaking. Even at 60-plus years old, Frank James and his 1903 Colt Hammerless were not “a pair to draw to.”