Sold Off By Her Father 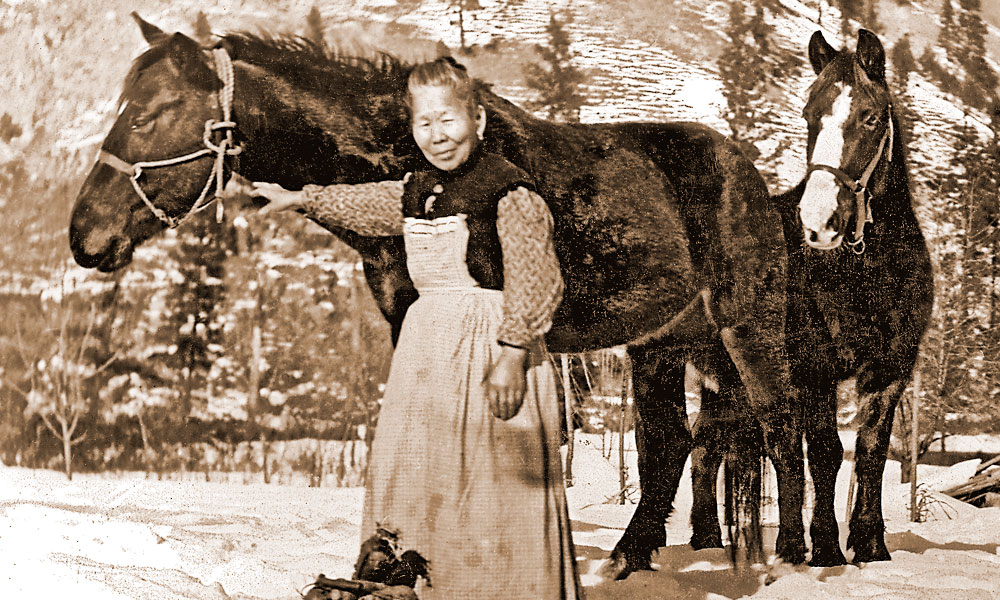 One of the better known stories circulated about Polly Bemis is that Charlie Bemis, the son of a Connecticut Yankee jeweler, won her in a poker game, but this she denied. She declared the poker bride was Molly, a Sheepeater captive. She could identify with Molly, though, as Polly had been smuggled into the arms of her captor.

Her given name is unclear; she was born on September 11, 1853, on the Chinese frontier. One account claims that, facing starvation after thieves raided the crops, her father sold Polly to a gang leader in exchange for seed to replant his fields. The bandit sailed with the girl to San Francisco, California, before the nearly 19-year-old Polly ended up in Warren, a decade after the Idaho Gold Rush had slowed. He either died or deserted Polly. She kept house for several years and may have been the “property” of a wealthy Chinese-American saloonkeeper.

On September 16, 1890, that saloonkeeper, Charlie Bemis, was reclining on a bench when John Cox, a half-breed Indian, shot him. The two had argued earlier over a poker game. The bullet went in Charlie’s left cheek and came out below one ear. Polly nursed him.

After Charlie recovered, Polly helped operate Charlie’s boarding house. They got married in 1894, the same year another Chinese exclusion act was passed, which might have put Polly in danger of deportation to her native land. The couple set up a ranch below Warren along the Salmon River and stayed married for close to 30 years.

After Charlie died in 1922, Polly moved to Warren. Friends took the grieving widow to Grangeville and Boise to cheer her up.  She had not seen the world outside Warren since 1872. She saw her first railroad train and a motion picture show. These marvels fascinated yet frightened her at the same time.

Polly deeded the farm to prospectors Charles Shepp and Pete Klinkhammer, who often looked in on her. When they found her ill in August 1933, they rigged up an outfit to take her out on horseback over the mountain trails.

When Polly died in Grangeville on November 6, the Salt Lake Tribune obituary reported that Polly was more than the “Chinese wife of a white man.” She was an expert angler who liked to fish in the Salmon River. Being only four-and-a-half-feet tall, she often said she was afraid that the fish would pull her into the water. Local lore reported her history of nursing sick or injured miners. She was regarded as a “respected citizen of the region.”

“Thousands of Chinese women were sold by their families and ended up enslaved or in brothels. Most of these women died from their ordeals,” said Nancy Kelly, director of the 1991 movie adapted from Ruthanne Lum McCunn’s fictionalized biography of Bemis, Thousand Pieces of Gold.

By contrast, the heroine of her film, Polly Bemis, “lived into her eighties,” she says, “and was revered as one of the great legends of the Pacific Northwest.”

Brian D’Ambrosio is a journalist in Missoula, Montana. He is the author of Shot in Montana: A History of Big Sky Cinema and is working on a Harlem Renaissance biography on Taylor Gordon, born in White Sulphur Springs, in 1893.