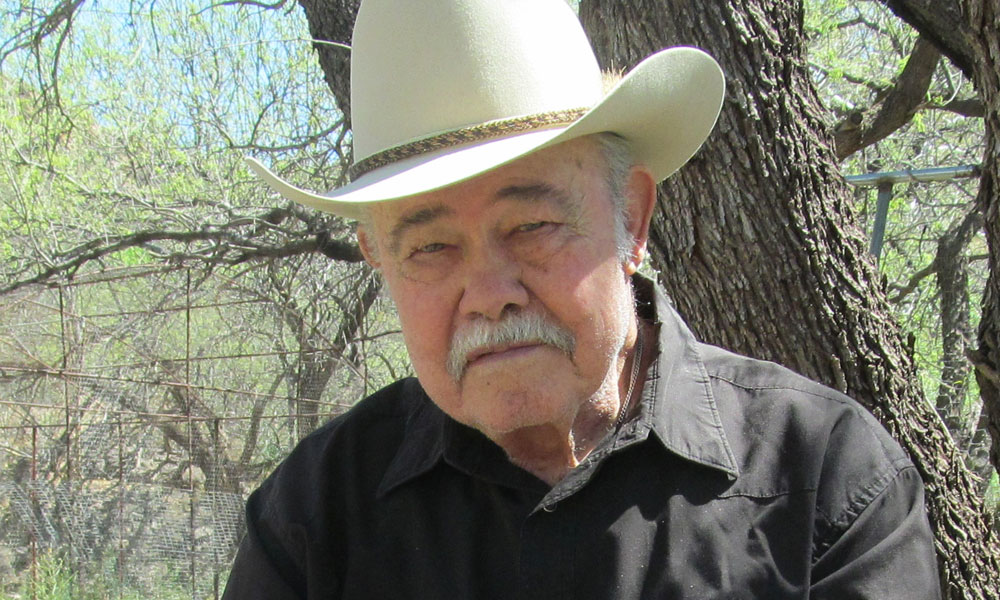 One day in 1937, in the bar of Tucson’s Santa Rita Hotel, the cowboy-actor Tom Mix gave seven-year-old Joe Brown a pair of buckskin chaps with “Joey” branded on them. Brown had been ill and the Hollywood star, a family friend, wanted to cheer him up.

Sitting in his home in the mountains outside  Patagonia, Arizona, Brown remembers that Mix was dressed for town, in a new hat, suit and shiny boots. The boy sure was grateful. But looking at the biggest movie star of the day, all he could think was that his own father, a cowboy from birth, was the real hero.

“Mix wasn’t like my dad and uncles,” says Brown. “They were working cowboys and, to me, nothing else mattered.”

During a lifetime of writing about cowboying in the West and in Mexico, JPS Brown has tried to close that divide between reality and myth. In his 14 short story collections and novels, including his first, Jim Kane, which became the 1972 movie Pocket Money, the author has told the truth about life in the saddle.

Authenticity is Brown’s calling card. His books put trail dust in readers’ mouths. His hero is the great cowboy-writer Will James.

“James made his writing about the work,” says Brown, “not drinking in town, and men with guns walking down the street, and all that stuff Hollywood loves. The work is good enough, dangerous enough and thrilling enough for anybody.”

At 86, Brown is still at it. In April, he released his latest, Cowboys Fly, a book of stories that includes an account of the Mix meeting. The collection is part of a new burst of production from Make a Hand, LLC, formed in 2011 with Rick Padilla, a former creative associate to famed film director Hal Ashby.

The company also launched Brown’s nonfiction book about Arizona rancher Jim Chilton’s successful lawsuit against the Center for Biological Diversity; a CD of cowboy songs produced by five-time Grammy-winner Ray Kennedy; and an audio version of Brown’s heartbreaking 2011 novel, The Spirit of Dogie Long, about a trail crew raising an orphaned infant.

Grammy-nominated voice coach Jan Smith narrates the book, and a movie version of Dogie is currently in production.

In addition to his cowboy work, Brown has been a Marine, a professional boxer in Mexico, and a movie-set wrangler who befriended Paul Newman and Lee Marvin, co-stars of Pocket Money.

He taught Steve McQueen how to rope for the 1980 Western, Tom Horn. They became good friends and McQueen pulled strings to get Brown the role of the priest who presides over Horn’s hanging.

In the West, we call that irony. Brown has lived more adventures than most men do in their dreams. He has struggled with drinking and has been married five times. He bought his third wife out of a Mexican whorehouse for $50. She tried to kill him twice, once with poison and again by jamming a pistol in his belly and pulling the trigger. The gun misfired.

When he lived in the Mexican Sierra Madre, locals called him El Mostrenco, “the unbranded one.” But his wild days ended long ago. Brown and his last wife, Patsy, were married for 39 years, until her passing in 2011.

Now he spends his time telling the story of the West he has known since he was a boy in Nogales. He started riding at three and broke his first horse at 12.

“I learned by watching my father,” he says. “When something’s in your blood, it’s not work. I loved everything about cowboying every day I did it.”

Does that mean, like James, that Brown has done everything he’s written about?

“You’re damned right,” he says with pride. “My work is one hundred percent autobiographical. That’s why I find life so tedious now, because I can’t do it anymore.”

Brown, who has been recuperating from a hip replacement, gets a far-off look in his eyes and says, “What I wouldn’t give to get horseback one more time.”

Editor’s Note: With his black Lab, Mikey, close by, Joe Brown still writes every day. His latest project is a screenplay that producers plan to film in Durango, Mexico. To order his latest books, go to MakeAHand.com.