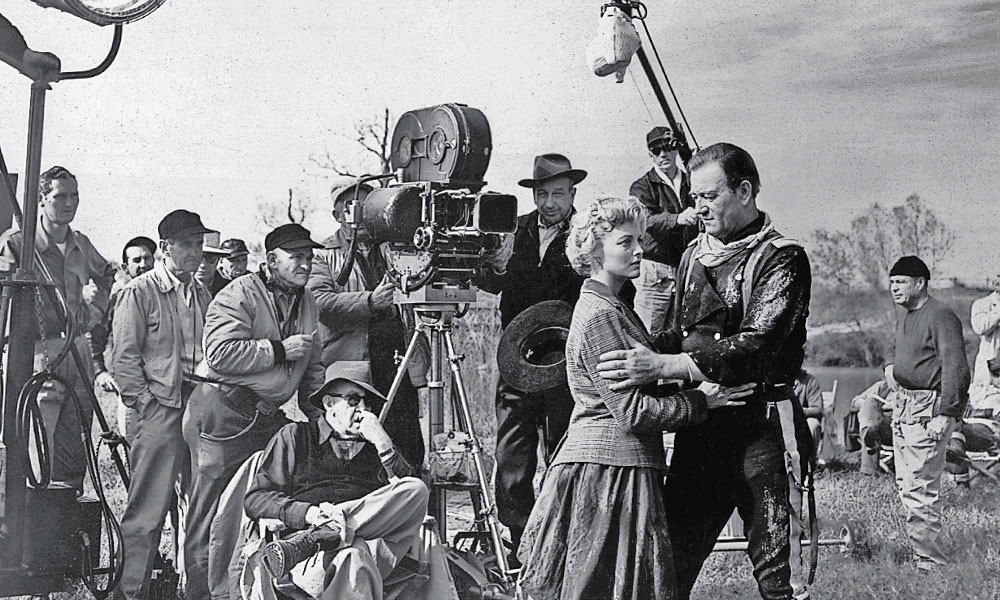 What was Ford looking for in an actress? Towers tells True West: “Pappy had a way of looking at women: she was to be respected, kind of on a pedestal. But she had to have a lot of spunk and fire. She was feminine, but had a backbone and was always a lady.”

The courtly Ford insisted that Towers be treated that way while filming. “No one ever used bad language around any women on any Pappy Ford set. We had tea in the afternoon, and it was all very gentlemanly. He treated you like a lady wants to be treated; but you had to have a sense of humor, because if you didn’t catch the subliminal things that went by you, it was a big disappointment to him.”

In The Horse Soldiers, Towers played Southern belle Miss Hannah Hunter, whose home is occupied by Union troops under Col. John Marlowe (played by John “Duke” Wayne). Hunter does her best to sabotage the colonel’s plans, though she gradually becomes romantically drawn to him, and to his medical officer and nemesis, Maj. Henry Kendall (William Holden).

“I was singing in the Persian Room of the Plaza Hotel [New York City] and [Producer] Martin Rackin saw me and invited me to Hollywood to meet Ford. The fact that I was Irish probably didn’t hurt. He screen-tested five of us; Gena Rowlands was one, and Joanna Moore. I had a call from an assistant to be at the Blessed Sacrament’s church Monday afternoon. I was to sit midway in a pew and wait. I sat, and someone behind me whispered in my ear, ‘You got the part.’ It was Ford, and he insisted on leaving and not talking to me, which was typical of him. It was always intrigue.”

For three months, Ford filmed exterior scenes in Mississippi and Louisiana, with Towers starring opposite two of Hollywood’s most dynamic leading men, Wayne and Holden. “They were delightful to work with,” she says. “They took care of me.”

She refutes claims that the two didn’t get along. “They even took an evening off. They cooked up a scheme [claiming that] in the dailies, Duke’s teeth looked discolored. He went into Shreveport with Bill, supposedly to have his teeth cleaned, and, of course, they had a night on the town. The next morning, we’re all waiting for them on location. Off in the distance, you saw this car driving in fast. They stopped, and John and Bill got out, looking like they hadn’t been to bed at all, and Pappy Ford had all the stuntmen lined up to smell their breath.

“But they were very different personalities. John Wayne was as big, friendly, as open as he was on the screen; terrific with fans. He’d be riding all day and acting, come back mud-caked, and he’d stand and talk to young people.

“I heard one young man saying, ‘My dad won’t let me have the car on Saturday night.’ And Duke asked, ‘Well, when was the last time you offered to wash that car?’ The boy said, ‘I haven’t.’ Duke said, ‘Why don’t you? Maybe your dad will give it to you. Now I have another piece of advice. When is the last time you told your dad you loved him?’ The boy kind of put his head down. ‘Go home and try that. That’ll work, too.’

“Bill Holden was the opposite. He was very shy, and he believed strongly that the performance he was paid to put on the screen was all he owed the public. People would ask him for his autograph, and he’d refuse. He was the nicest, most polite gentleman, but he was just the opposite of Duke.”

The shoot was enjoyable, but not easy. “Louisiana has swamps, and anything that happened on my horse, I had to do, except for one horse fall into the water. They had a stuntman do that,” she says.

Ford appointed two men to look after her whenever she was on horseback. “Freddie Kennedy and Slim Hightower were wonderful old stuntmen. In the film, one’s ahead of me and one’s behind me, but we rode through a forest going what felt like 100 miles an hour through these trees. It was a tough location, but wonderful.”

“Freddie was doing his last fall,” Towers says. “It was a simple shoulder fall, and Duke had told me to stand behind the camera and to run in. And they wouldn’t call ‘Cut’ until I had given Freddie a kiss on the cheek. I ran in, and when I picked up his head, I realized that he was mortally hurt. He’d fallen and broken his neck, so I really was the last person to hold him. He died on the way to the hospital, which certainly cast a pall on the closing shot of the location.”

She loved the stuntmen and remembered especially how Ford looked after them: “Pappy didn’t pay them until their last weekend, so they would take money home. He gave them enough per diem to survive, but on location, there wasn’t much you could do with it, but gamble.”

After nearly 50 years, Towers takes great pleasure in her memories: “You take it in stride, then later look back, and it’s just amazing. To be in my first big, big film, with those actors, and have it be just joyous all the time, and John Ford guiding everybody. It was a rare and wonderful experience.”