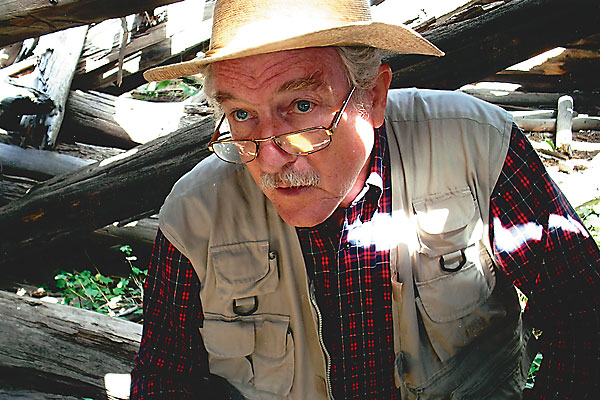 Students at the University of Colorado at Boulder memorialized him by naming their cafeteria after him, and he is defended by some as a guy who was forced to eat human flesh to stay alive that harsh Colorado winter of 1874.

Tell all that to historical archaeologist James E. Ayres, and he’ll tell you this: “When we looked at the bones, we found all had been chopped in the head with a hatchet; some had defensive wounds on their arms, to fight off the blows. If they’d have died, there was no need for the hatchet marks.”

Ayres was among the archaeologists who in 1989 excavated the mass grave that held the five men who didn’t survive Packer. He remembers the excitement of finding the grave, then the thrill of solving this Old West mystery: “Everybody was happy—we were able to demonstrate once and for all that he was killing everyone and then butchering them,”  says Ayres, from his office at the University of Arizona in Tucson.

This wasn’t the only thrilling part of a career that has spanned more than 40 years, but it was the one that got the most press attention and settled a 115-year debate. If you look at the whole picture, those bones were a tiny fraction of the “millions of artifacts” Ayres has dug up over his career, starting with heading the Tucson Urban Renewal archaeological excavation in the late 1960s.

And for all that work, the Society for Historical Archaeology in Rockville, Maryland, awarded Ayres its J.C. Harrington medal for lifetime achievement this January in Albuquerque, New Mexico. The society’s highest honor, the medal is given to someone who has shaped the growth and standards of archaeology. Upon hearing the news, Ayres said, “Getting this award is sort of the highlight of your career in a way.  When you’ve been around long enough, eventually good things come.”

The 71-year-old Ayres is a self-effacing guy who says he’s not content to look back at what he’s already done, but to look ahead at where he’s still going.

Yet what he’s done in his past has been at the center of one of America’s most intriguing stories: Packer had talked himself into a guiding job for men trying to get to the San Juan Mountains in Colorado to seek mining claims, but he wasn’t much of a guide and the party of six got caught in a harsh winter with far too few provisions. When Packer, alone, stumbled into camp in early April 1874, he told the first of four stories to explain where the others were: First, they’d gotten separated, and he’d just beaten them here; second, that men died at various times along the trail and they were forced to eat some of their flesh to stay alive; third, that Shannon Wilson Bell had killed the other men while Packer was out hunting and Packer had to kill Bell in self-defense; and fourth, he contradicted the Bell story and returned to men dying here and there.

But innocent he wasn’t, according to the team that included Ayres and was led by Professor of Forensics James E. Starrs (a man referred to as the “father of Indiana Jones” because he so resembles Sean Connery and because he is an exhumation expert—he helped exhume the bones of Jesse James). The team proved that Packer was a murderer, a cannibal and a liar.

The project fit nicely into why Ayres loves being an archaeologist. What satisfies him most, he says, is “the sense of discovery, whether you’re actually digging or doing archival work with old documents—either one has a sense of discovery and a flush of excitement when you find something new or different.”

His first flush came with the urban renewal project in a city known as the Old Pueblo—the Spanish Presidio that became Tucson. In 1967, when the city wanted to build its convention center, it went to the heart of downtown—the oldest section of habitation that dated back to 1776. Ayres was then working at the Arizona Museum, and he headed an excavation that found “a good million” artifacts, from old Papago pottery to Chinese rice bowls, to buttons and “an occasional rusty tin can.” He called it “pretty typical urban trash.”

He then started teaching at the university, but in 1979, he was tapped by Gov. Bruce Babbitt to serve as the state historic preservation officer. Although it was part of the State Parks Department, he found the office got “no support to speak of from parks” and that he wasn’t able to do much in his year and a half on the job.

“I gave a lot of public talks and wanted to get as many places as possible on the National Register of Historic Places” to help assure their preservation, he remembers. Our nation’s preservation efforts is an area he still follows closely, saying he’s pleased that there’s “more and more public interest.”

But don’t think Ayres is resting on his laurels. In the summer, he can be found mapping what’s left of the old mining camps in the Uinta Mountains of northern Utah. Who knows what else is still waiting to give him the “flush” of excitement. “I expect to continue doing this for some time,” he says, an Old West Savior all the way.