William “Buffalo Bill” Cody had been planning his next feat as a showman when, in 1882, he was asked to stage an “Old Glory Blowout” in North Platte, Nebraska.

Press agent, advance man, manager and friend, “Arizona John” Burke helped Cody cobble together a celebration that would evolve into the famous Wild West show, a huge traveling circus of cowboys and Indians, pioneers, trick riders, sharpshooters, buffalo and stagecoaches that would tour the U.S., and later Europe, for 30 years, turning Cody’s version of the American West into legend. Through it all, Burke was promoter and keeper of the flame, a role he regarded as near-sacred.

Bearing the torch today, with no less passion, Western artist Thom Ross re-creates one fine PR move by Burke. In September 1902, the Wild West show played San Francisco, California. Burke whipped up a good amount of hoopla when he marched 100-plus Indians on horseback in full regalia out to Ocean Beach where they stretched some 200 yards down the beach just below the famous Cliff House.

An albumen print of the impressive photo hangs at the Buffalo Bill Historic Center in Cody, Wyoming, and has long captured Ross’s imagination. This September, he re-creates the scene with plywood cutouts of Cody and all the Indians festooned in feathers, arrows and beads, plus enough of Ross’s signature splashes of pigment to match the colorful lives of these historic characters. The show comes alive on the beach from September 5 to 14.

Ross’s work has been compared to that of Bulgarian installation artist Christo. Ross admires his work and cites Christo as influential to his own vision. He appreciates the commonality that each artist reaches an audience outside the confines of “artsy-fartsy” galleries and museums that can be exclusionary and intimidating, and he likes that this “big” art confronts people in their daily lives where they can hardly miss it.

Each night, the Wild West finale depicted a re-enactment of Custer’s Last Stand, so it makes sense that Ross tells this chapter of the story now, having just come off his 2005 critically-acclaimed installation of 200 life-sized plywood members of the 7th U.S. Cavalry and Indians who killed them at the Battle of the Little Bighorn.

Burke had a way with Indians and honored his word to them. Just the same, when Sitting Bull agreed to join the Wild West show in 1885, the Dakota Sioux warrior got it in writing. The only known commercial contract between Sitting Bull and a white man was dated June 6, 1885, signed by Burke among others, and it set his weekly pay rate at $50. Although Sitting Bull was no fan of the whites, he spoke highly of Cody and even adopted Wild West show sharpshooter Annie Oakley as a daughter in a highly publicized ceremony.

Ross finds it fascinating that the people in the Wild West show were not actors but rather real folks who actually lived the lives they were portraying. That first season featured an early partner of Cody’s, a sharpshooting dentist who quit his day job for the glory of it all. Indians from various tribes were the very Indians who a few years earlier were fighting the battles they now re-enacted or had family members who fought in them and surely knew some who died fighting. The photo shows one Indian holding aloft an American flag, and one can only suppose the significance of such an act 26 years after “Custer’s Last Stand.”

This was the defining moment of the American West, for the citizens of the U.S. to be sure, but for the rest of the world as well after the show reached Europe. Ross points out that to a Europe steeped in centuries of accepted tradition, this “exportation” of America, or at least what Cody considered to be America, “cemented the world’s concept of Americans as gun-totin’, rootin’-tootin’, wild ridin’ lunatics!”

During a press conference in Barcelona, Spain, Buffalo Bill and the Indians in his company stood next to the statue of Columbus at the end of Las Ramblas. “This is our agent who got here 400 years before us,” announced Cody. To which one of the Indians responded, “It was a black day for us when he discovered America.”

Ross chose this particular page in history because he says it marks the beginning of the American mythic struggle. We are seeing reality become myth in the 1902 image on the beach. General Custer is a controversial figure for sure, but the reality for those of us who live in the West today is that we do so in part because of Custer.

“It is the tragedy of human existence,” says Ross. “In that battle of the settler and the Indian, you have the American neurosis. What Custer unintentionally did was to waltz into mythology in the most perfect manner.”

Patricia Bennett is a freelance story writer based in Seattle, Washington. She works toward a better future, knowing the keys to it lie in our past. 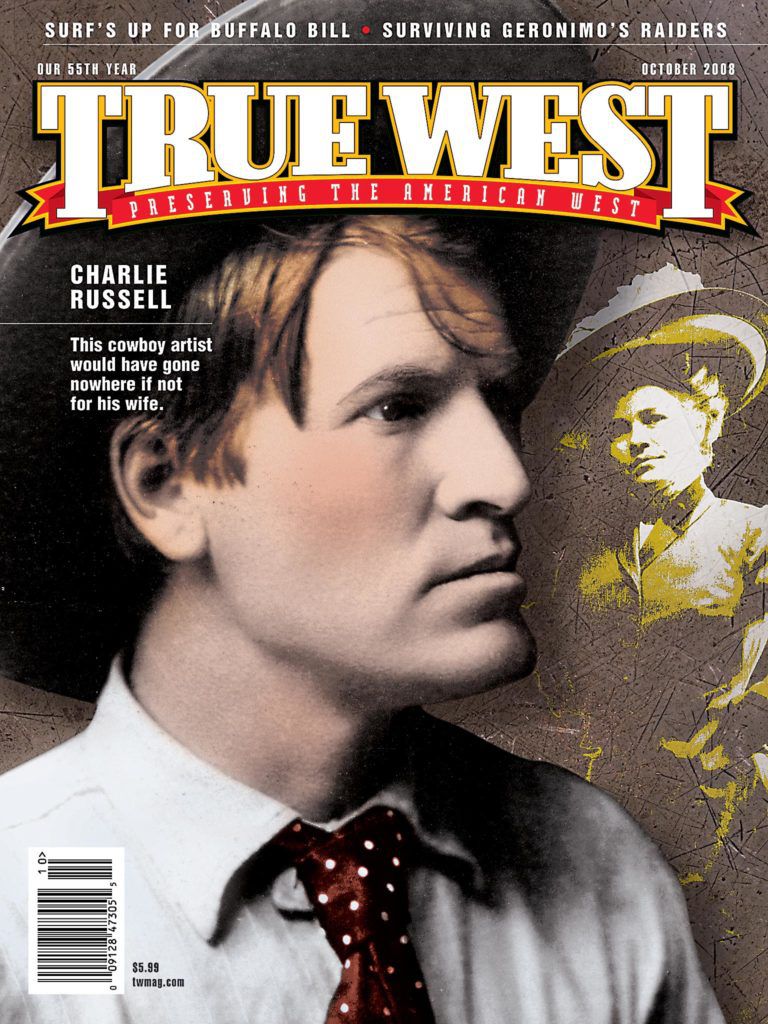