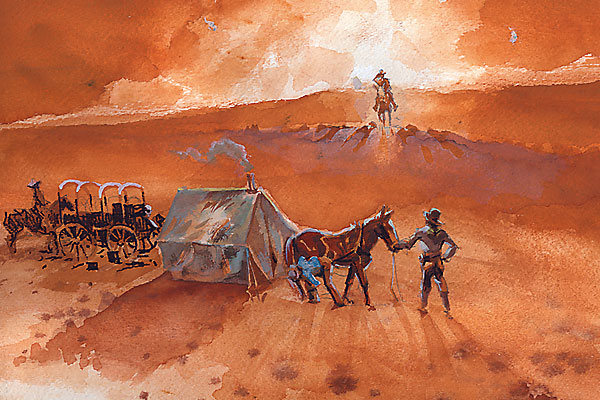 Near dusk, two members of the Wild Bunch, Will Carver and Elzy Lay, ride into Virgil Lusk’s cow camp near Chimney Wells, New Mexico, and inquire if Lusk has seen some stray horses in the area.

Cowman Lusk tells them he has seen strays on his range. (He keeps to himself his strong suspicion that these strays were turned loose by horse thieves.) Since it is too dark to look for the horses, Lusk invites the two strangers to overnight at his camp. The outlaws beg off, telling of a suitable camp nearby. They do accept an invite to join the crew in the morning for biscuits and hot coffee.

After the two men ride off, Lusk dispatches his oldest son John to  inform the sheriff about the visitors.

Riding to town under the cover of darkness and at a full gallop, John reins up at Eddy County Sheriff Cicero Stewart’s office and tells him two heavily armed strangers are camped near Chimney Wells and that his father thinks they are wanted outlaws.

Stewart deputizes two locals, Rufus “Rufe” Thomas and cowman John D. Cantrell, and the three head for Chimney Wells, arriving at the Lusk cow camp around four in the morning of August 15. Hobbling their horses out of sight in an arroyo, the trio throws tarps over the saddles. Each one takes up supine positions where they can keep an eye on the Lusk cook tent.

Not long after sunrise, one of the outlaws rides out of a distant arroyo, ambling toward breakfast. It’s Elzy Lay. Will Carver allegedly watches from a ridge with binoculars, while a third outlaw, Tom Capehart, has been sent into Carlsbad for supplies.

Leaving his rifle in the scabbard, Lay dismounts and enters the cook tent where he is served breakfast. As he gobbles his food, he hears approaching boots coming at a run. Lay apprises the situation in a flash; he jerks his pistol as he turns to Lusk and screams, “Did you do this?” properly guessing Lusk must have informed the authorities.

Firing as he lunges out of the tent flap, Lay’s bullet hits Lusk in the wrist. Outside, the lawmen all point their weapons at the outlaw and demand his surrender. Running to the far side of the tent, Lay opens fire, hitting Rufe Thomas’s outstretched left arm, with the shot coming out near the armpit and entering under the shoulder blade.

Sheriff Stewart returns fire and the outlaw drops, as if shot (although not actually hit; the outlaw later claimed one of Stewart’s rifle bullets passed so close to his head “as to stun him for a moment”).

Running up to Lay’s position, the lawmen disarm Lay. As they search him, the outlaw slugs the sheriff and tries to grab his pistol out of his scabbard. But the tough sheriff slaps leather, grabbing his own pistol and bringing the barrel down on Lay’s head, knocking him temporarily unconscious to the ground.

The wily outlaw is literally run to ground, but his story is long from over.

Elzy Lay was riding with two other outlaws: Will Carver and Tom Capehart. Through field glasses, Carver watched the fight and capture of Lay from a ridge near their camp, which was about a half or three-quarters of a mile away. When Carver first saw Lay sprawled on the ground, he thought his pard might be dead.

Sheriff Stewart and his men saw Carver watching them, and Stewart waved his hat. Carver returned the gesture and shouted “Adios.” The sheriff did not pursue the outlaw since the lawman had a dangerous prisoner in tow and two wounded men to look after. Sheriff Stewart procured a hack to transport the party to Carlsbad, where they arrived by 9:30 that morning.

Carver rounded up a gray horse he and Lay had been looking for, and he galloped away. He was spotted riding by Dagger Draw, and by 10 a.m., he passed the Carlsbad schoolhouse. A few hours later, he was seen at Seven Rivers, 20 miles to the north of Carlsbad. Defying conventional wisdom, the outlaw made a feint toward the mountains at Rio Penasco, but he actually headed east to the Pecos River, crossing and heading north along the eastern bank. All of this was ascertained later, after Carver had slipped away.

Two hours after the takedown of Lay, a clueless Tom Capehart rode into Lusk’s cow camp with provisions he had bought for the trip to Arizona. With Stewart and his men gone, the cowboys wanted nothing to do with arresting Capehart, so the lucky man also evaded the law, riding off in the same direction as Carver had gone.

Both men would end up in Alma where Butch Cassidy and others of the gang were holding forth.

The Brave Carlsbad Boys Who Brought Lay to Bay

Both Cicero Stewart and Rufe Thomas had known the Ketchums before they turned outlaws.

Having been raised in West Texas, Thomas, a gambler by trade, also knew Will Carver. The deputy may have been a small man, but his friend John Loomis described him as “lithe and tough” and “an expert at handling a six-shooter….”

When Stewart first called on Thomas in the small gambling room he was running in Carlsbad, Thomas declined to go. “Cis,” as his friends called him, complained that Thomas “was just like the rest of the citizens who refused to help in an emergency.” The gambler relented and borrowed a rifle from Silas T. Bitting’s store, ignoring a bystander’s warning that the rifle was liable to hang fire.

To make matters worse, Thomas’s horse tripped in the dark during the 20-mile ride to Lusk’s cow camp, and it nearly threw him. Only later did he discover his pistol had jerked free and disappeared when his horse stumbled.

When Thomas and the other two lawmen made their dash to the tent, Lay lurched outside, refusing to surrender. At the point of no return, Thomas squeezed the trigger twice on the borrowed rifle; both times, the gun misfired.

Lay caught sight of Lusk and yelled, “You old son of a bitch, you’re the cause of this!” and sent a shot his way, hitting the ducking cowman in the wrist and forearm. Lay then turned and fired at Thomas, who finally got a shot off from his rusty weapon. But Lay’s bullet caught the gambler in his left arm, thudding into his shoulder blade and almost knocking him to the ground.

Dodging behind the tent, Lay continued to avoid being hit until a shot from either Stewart’s or Thomas’s rifle stunned Elzy, sending him tumbling face down in the grass.

As the lawmen converged on the prostrate outlaw, Cantrell sneered, “He has shot Rufe, and I am going to kill the son of a bitch.”

Looking a tad creepy, a miserable Elzy Lay (claiming to be Will McGinnis) scowls at Deputy George W. Titsworth as the lawman takes a photo of the outlaw sitting outside his prison cell in Trinidad, Colorado. Tom Ketchum (claiming to be George Stevens) and Lay would be reunited in Trinidad. Cicero Stewart, having just delivered Lay on the morning of August 23, went that same day to identify Ketchum in the hospital. Ironically, hundreds of miles apart, both outlaws were arrested on the same day.

Tom Ketchum, alias “Black Jack,” tried to rob a train all by himself, completely unaware that his former gang, including Elzy Lay, had already robbed the same train. Severely wounded and easily captured, Ketchum was taken to Trinidad, Colorado. When he heard about the capture of his pard Lay, he became “very restless and ugly and begged the officer for a gun that he might kill himself.” Ketchum later tried to accomplish the deed on his own; he tied his bandage around his neck in an attempt to commit suicide by strangulation.

The two outlaws, Ketchum and Lay, were taken by train to Santa Fe, New Mexico, and locked up in the penitentiary.

Will Carver was involved in several more shootings and robberies. He made it to Fort Worth, Texas, in time for the famous “Fort Worth Five” photo, which he posed for along with other Wild Bunch pards Butch Cassidy and the Sundance Kid. Carver died in a hail of bullets in Sonora on April 2, 1901 (three weeks before Black Jack took the long drop).

Elzy Lay was sentenced to life imprisonment for the death of Sheriff Ed Farr in the Turkey Creek Canyon shoot-out. After helping thwart two attempted prison breaks, Lay was pardoned and released on January 10, 1906. Returning to the Alma area, he allegedly dug up loot from an old robbery (some say $58,000) and decamped to cooler climes. Known sometimes as McGinnis, Lay married in Thermopolis, Wyoming, where he lived comfortably. When he moved to California, he worked as the water master for Imperial Valley Irrigation. He drank too much, had one heart attack and then died in Los Angeles in 1934 at the age of 66. His body was buried in Forest Lawn Memorial Park cemetery.