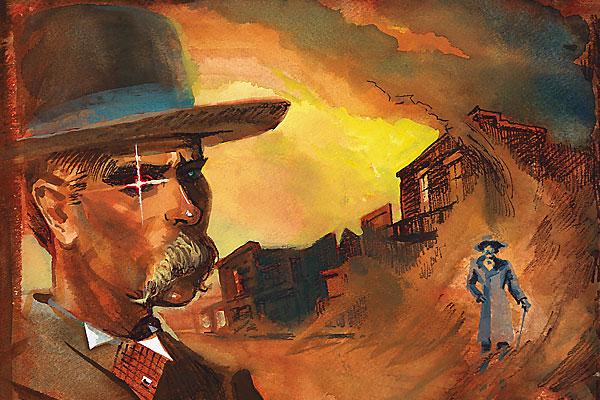 Wyatt Earp was a fairy.

Don’t aim your pistols at me. I’m not outing anybody. Neither is Emma Bull.

Okay, Wyatt’s not really a fairy. A fairy, in fantasy novels, is a benevolent little creature that makes magic. A fay. A pixie. A nisse. A brownie. An elf. Wyatt isn’t so benevolent in Bull’s novel Territory. He’s a doer of evil. A warlock. And he has a lot of company.

I’ve been a fan of Emma Bull ever since Minneapolis rocker Eddi McCandry fell in love with a shape-shifting phouka and got caught in the middle of a battle between good and evil fairies in War for the Oaks, so I’ve decided to meet her on her own turf— not Borderland or Middle-earth, but a Raging Sage coffee shop in Tucson, Arizona—and talk about her turning the Tombstone story on its ear.

“Bringing the fantastic into this story wasn’t all that farfetched,” Emma tells me. “There seemed to be so much going on behind the scenes that would be really fun to explain in ways that couldn’t happen but would be kind of interesting if they had.”

Yet Territory is so rich in history, Emma’s husband suggested that she escape her Science Fiction/Fantasy niche and write a straightforward historical novel. She turned her husband into a toad and stuck to what she knows best.

“Part of the fun is putting in those just slightly weird, wacko things that history doesn’t account for,” she says. “In the Epitaph, there was an entry, ‘There was an arm found in the street….’ You know how you feel as a novelist. There was an arm in the street? And they don’t know whose arm? Doing straight history, I would have done something entirely different.”

“Ahem,” I say, “the people in Tombstone can be overly protective of their town, their gunfights, their legends. So did anyone take exception with you bringing supernatural forces to Cochise County?”

“I think you get a pass on that when you’re writing Fantasy. I suspect nobody’s going to be bothered by me covering the Tombstone story.”

Plot spoiler alert, but important nonetheless! What might bother some unsuspecting readers is that Territory ends with the Guadalupe Canyon Massacre that left Old Man Clanton dead in August 1881. That’s two months before Tombstone’s most heralded event.

“A really disturbing number of people have said, ‘There is a second book, right?’” Emma says.

Yes. Territory was supposed to be one book, but Emma got carried away.

“The outline kept getting longer and longer, and I kept writing away, kept finding good stuff I wanted to put in, and I started thinking, ‘I’m going to be writing this book for the next 30 years!’ But my editor at Tor/Forge said, ‘You can make it two books.’”

“Unfortunately, I write slow, but it’s moving forward,” she says, “and it’s under contract so it really will happen.”

Then I see Emma’s eyes, and I decide to stay out of her territory. I don’t want my arm to be found on the streets of Tombstone.