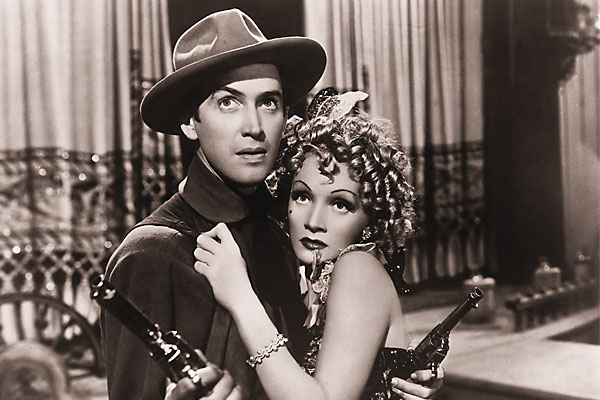 Crawling along the freeway in Los Angeles, I’m moving about as fast as Jimmy Stewart talked.

James Maitland Stewart would have celebrated his 100th birthday this year. He lived a wonderful life before his death in 1997 at age 89, working with some of the greatest directors of all time: Robert Aldrich, Frank Capra, John Ford, Alfred Hitchcock, Anthony Mann, Otto Preminger and Billy Wilder. He won an Academy Award for 1940’s The Philadelphia Story and a lifetime achievement Oscar in 1985. He also won the Distinguished Flying Cross as a combat pilot in WWII, so if any actor deserves a road trip in his honor, it’s Jimmy.

Talk about popular. His star on Hollywood’s Walk of Fame, at 1708 Vine Street, is one of four that have been stolen, although cameras are being put up to thwart any more would-be thieves. He’s buried in Glendale at Forest Lawn Memorial Park. Is that a bunny sitting on his headstone? Must be his pal Harvey (another one of my favorite movies). But this isn’t about death. It’s about Jimmy’s life.

Okay, it’s about his Westerns, because he made some great ones. Although the Autry National Center’s Museum of the American West in Los Angeles has some Jimmy movie memorabilia, I’m hitting the road, away from Hollywood’s Western backlots (like there are any left!) and going on location to Jimmy Country. I only wish I had thought to buy tapes of his 1953-54 radio show, The Six Shooter, to listen to on the road.

Hollywood in the Desert

I’m in Tucson, Arizona, hanging my hat at the posh Hacienda del Sol Guest Ranch, a 34-acre resort that began in 1929 as a private school for girls. Converted into a guest ranch in the 1940s, it catered to stars. In fact, I’m bunking just a few steps from the Spencer Tracy Casita. John Wayne also stayed here. I’m not sure if Jimmy made it here, but he did costar with Tracy and the Duke, and he often brought his Westerns to Arizona.

In fact, the movie that resurrected Jimmy’s career after WWII was Winchester’73, directed by Anthony Mann and costarring the irresistibly evil Dan Duryea. It’s interesting to compare Jimmy’s pre-WWII image of the bumbling, goofy everyman (Destry Rides Again) to the leathery, explosively violent Jimmy after all those combat missions.

Surprisingly, I’m told, Jimmy only filmed once at Old Tucson Studios. During its heyday, Old Tucson Studios, first built for 1939’s Arizona, ranked second to the Grand Canyon as an Arizona tourist destination. It still brings in tourists and film crews, although my guide tells me that the last filming done was a Russian rap video. Much of Winchester ’73 was also filmed on or near White Stallion Ranch west of Tucson, including that great shoot-out between Jimmy and Stephen McNally.

Stewart’s next movie was another Western, and another hit, so I’m heading north to Sedona and Flagstaff, with a quick stop at Wickenburg and the Desert Caballeros Western Museum. Not that Jimmy filmed any movies in Wickenburg, but I swear the wrangler at the Flying E Ranch is wearing a hat just like that battered Stetson Jimmy wore all the time.

Broken Arrow was filmed in 1949 in northern Arizona before shooting began on Winchester ’73 but was released after, to much fanfare. Jeff Chandler received an Oscar nomination for his supporting performance as Cochise, and cinematographer Ernest Palmer and screenwriter Michael Blankfort were nominated as well. Blankfort, however, was fronting for the blacklisted Albert Maltz. In 1991, the Academy gave Maltz his rightful nomination.

Director Delmer Daves’s film was heralded for its sympathetic treatment of Indians—earning a Golden Globe for “Best Film Promoting International Understanding”—and when the restored version was released on DVD last year, The New York Times noted, “If you’re looking for a movie to teach your children something about racial tolerance—a movie that’s a movie and not a sermon—this is it.”

The movie’s last scene was filmed at Lone Pine, so it’s off to California. Like Old Tucson, Lone Pine doesn’t show up often in Jimmy’s Westerns. Maybe that’s why this year’s Lone Pine Film Festival (Oct. 10-12) honors The Lone Ranger and Wagon Train and not Jimmy.

The next stop might as well be Mount Hood country in Oregon, with a brief detour to Carson City, Nevada, site of 1976’s The Shootist, John Wayne’s last film with Jimmy playing the doctor who gives the Duke the bad news. You might recognize the circa-1914 Victorian Krebs-Peterson House, at 500 N. Mountain St., from The Shootist.

Bend of the River

Up in Oregon, Mount Hood (and Sandy River and Timberline) served as the backdrop for 1952’s Bend of the River, based on Bill Gulick’s novel Bend of the Snake. I like Gulick’s novel, but I’m not a big fan of this Mann-Stewart film. At the beginning of the flick, Jimmy’s leading a wagon train to Oregon, rides out to scout the country, winds up saving Arthur Kennedy from getting lynched, then brings Kennedy back to the wagon train for the rest of the trip. And no one ever asks, “Hey, where’d the new guy come from?”

Gulick had a better reason to dislike the movie. The SOBs-in-charge forgot to invite him to the movie’s world premiere.

Of course, I like 1954’s The Far Country (with Canada’s Jasper and Banff national parks subbing for Alaska) even less, so there’s no point in driving to Alberta. Not with these gas prices! Instead, it’s back south to Kanab, Utah—alas, the Paria movie set, of Bandolero! fame, burned down in 2006—but there’s plenty to see in Colorado.

The Naked Spur (1953), which many critics consider the best of the Mann-Stewart Westerns, was filmed in and around Durango. You can get all the film stories you want at Durango’s circa-1892 Rochester Hotel. Visitors should also check out the Strater Hotel, where Louis L’Amour (who did the novelization of the How the West Was Won screenplay) often worked on some of his novels.

Riding on the Durango & Silverton Narrow Gauge Railroad, I keep looking for Robert Ryan, Janet Leigh, Millard Mitchell and Ralph Meeker along the Animas River. I don’t see them, but could that be Dan Duryea down there hiking? Or did I have one Durango Golden Ale too many at the Durango Brewing Company?

Jimmy returned to Colorado for 1957’s Night Passage, which was shot in Durango, Silverton, Molas Lake, Red Mountain City and the Shenandoah-Dives and Mayflower mines north of Silverton. The story goes that Mann and Stewart had a falling out over Stewart’s character (disgraced railroad man Grant McLain). James Neilson replaced Mann, who never worked again with Jimmy.

The real star of Night Passage is the Durango & Silverton Narrow Gauge Railroad, which transports thousands of tourists each year on its historic tracks. The locomotive proved to be a much better actor than Jimmy’s costar, Audie Murphy, who played Jimmy’s bad brother.

Hmm. There’s a frequent theme. Jimmy often has a bad brother in his Westerns. Or a bad friend such as Arthur Kennedy.

The Man From New Mexico

Which was the case in the Mann-directed 1955 Western The Man From Laramie. That movie shows off New Mexico—Taos, Tesuque and Bonanza Creek Ranch just outside of Santa Fe. For the past few years, Bonanza Creek has been the site of the annual Buckaroo Ball, which raises money for children at risk in Santa Fe County—something Jimmy, often recognized for his humanitarian work, would appreciate.

Jimmy came back to New Mexico for 1969’s The Cheyenne Social Club, the first movie shot at Santa Fe’s Eaves Movie Ranch, which is starting to look more and more like a crumbling ghost town. That’s too bad, because Eaves Movie Ranch has a great movie history that includes A Gunfight, Chisum, The Cowboys, The Culpepper Cattle Company and Silverado.

From Santa Fe, I’m heading to Texas, with a quick stop at the Fort Worth Zoo—because Jimmy was also a big supporter of zoos, and that’s where I met him. More about that later. Then it’s on to Brackettville and the historic Alamo Village, another location Jimmy used twice. John Ford’s sleep-inducing Two Rode Together was the second theatrical film shot at the set John Wayne created for 1960’s The Alamo, but the scenes I remembered as I walked along the set come from 1968’s Bandolero!

Still sharp as a tack, Alamo Village’s Virginia Shahan, whose late husband brought Hollywood to Brackettville, smiles as she recalls finding Jimmy sitting on a rock at Alamo Village. The crew had left, and Jimmy’s driver had forgotten him.

“Do you want a lift to town?” Virginia asked.

Alas, Bandolero! wasn’t so golden. It’s a downer of a movie, directed by Andrew V. “Mr. Mediocrity” McLaglen. Everybody’s pretty much dead by the end of the film, including Jimmy. His career died after that one too, although he’d pop up in a few movies and TV shows, and he’d read his poems to Johnny Carson.

Which brings me back to Fort Worth, Texas, 1989, waiting for hours to have Jimmy hand me a copy of Jimmy Stewart and His Poems, and drawl, “I signed it.” I showed up for work more than an hour late, but nobody bitched.