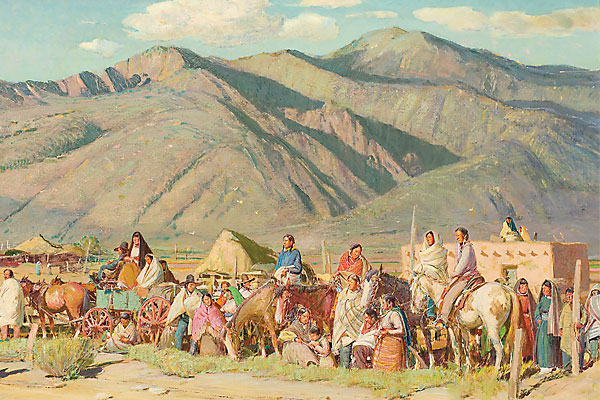 “Every now and then I see whirlwinds. Looking out now, I see one but as it approaches it is a band of Indians out on the ceremonial rabbit hunt.

“These rabbits are hunted with bows and arrows, clubs and dogs—but no firearms, such is the reverence for the old days. The bands come on—all mounted on their ponies, help making the sight picturesque,” wrote the impressionable artist Oscar Berninghaus about the Pueblo Indians in Taos, New Mexico, who immediately captured his fascination once he arrived in Taos by rail in 1899.

The artist would keep returning to Taos from St. Louis, and by 1912, he and five others formed the prestigious Taos Society of Artists to market their works. He eventually moved there permanently at the age of 51 in 1925. The personal relationships Berninghaus cultivated with the Pueblo Indians and his dedication to showing their everyday lives, not romanticizing them, set him apart from his peers, and may be why today he is the top-selling artist of the “Taos Six.”

His work, The Pueblos Await the Dancers, not only set an auction record for the artist when it sold for $1.3 million at Coeur d’Alene on July 26, 2008, but it also placed him at the top of the society’s totem pole, even surpassing Joseph Sharp, who was the first of the six to travel to Taos and be inspired artistically.

The year 2008 has been great for the  founding artists: Joseph Sharp’s 1903 oil The Medicine Teepee set a record for the artist when it sold at Christie’s New York on May 21 for a $1.26 million bid; that same auction was also record-setting for Eanger Irving Couse, whose oil The Harvest Song sold for $775,000, and for William Herbert Dunton, whose oil Texas of Old sold for $730,000.  In earlier years, Ernest Blumenschein’s oil The Red War Bonnet sold for $390,000 at Scottsdale Art auction in April 2006, while Bert Geer Phillips’s oil Call of Spring (Song of Flute) sold for $240,000 at the now-defunct Altermann & Morris in November 1999.

When Berninghaus died of a heart attack in 1952, artist Rebecca James captured the public sentiment about his art perfectly: “The body of his work is a magnificent document of the Southwest, painted as no one else has put down in this country. It is suffused with tenderness, is straight and tough as a pine tree, strong as a verb.”

The Coeur d’Alene Art Auction hammered in at nearly $33 million.