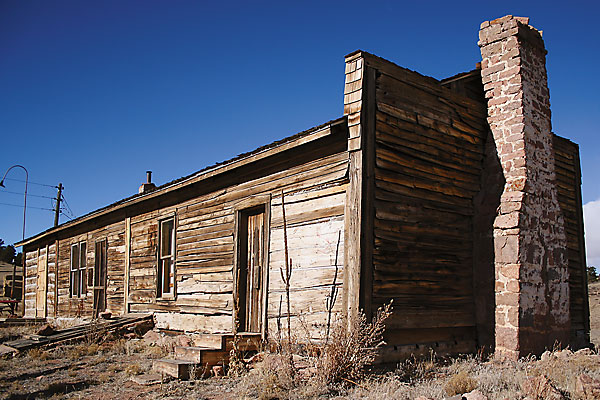 “A high and efficient servant of the Overland, an outlaw among outlaws and yet their relentless scourge, Slade was at once the most bloody, the most dangerous and the most valuable citizen that inhabited the savage fastnesses of the mountains.

Jack Slade started driving teams for William Russell, Alexander Majors and William Waddell in 1849 and would spend the next 15 years freighting, managing stagecoach lines and fighting across Colorado, Wyoming and Montana. While he drove teams in Kansas and Nebraska for a time, Slade began making his reputation during the 1857 “Utah Mormon War,” hauling supplies for the army commanded by Gen. Albert Sidney Johnston, which was on a mission to install a new governor to replace Brigham Young. Slade already had a reputation as a hard-case who could fight with his fists or with his guns, and who would protect his employer’s stock and be extremely efficient—or unpredictably violent.

Slade proved his worth, and his employers named him stationmaster at Kearney, Nebraska. He held that position only briefly before being named district supervisor, and just another three months later became superintendent for the company’s stagecoach operation extending from Julesburg, Colorado, to Fort Bridger, Wyoming. He hired teamsters and cooks, purchased livestock and hay and generally kept the operation on the road during a period that became increasingly unsettled, as Indians, realizing the encroachments on their territory, began taking steps to halt travel along the roads established by the emigrants and the freighting firms.

To follow Jack Slade’s trail, we’ll start in Julesburg. This town, in extreme northeastern Colorado, is best known as a rowdy, end-of-tracks town associated with the westward movement of the Union Pacific Railroad, but Jack Slade’s time here predated the laying of the rails by Jack Casement’s crews.

Slade set his reputation in Julesburg due to an incident he had with James Williams. Multiple accounts have circulated throughout the years about the dispute and eventual fight between the two of them, including one penned by Mark Twain in Roughing It.

Slade and Williams both worked for the freighting company. The stories about their conflict quickly spread but almost certainly became stretched with every telling, making it difficult to know what really happened. But surely they pulled guns on each other and engaged in a knock-down, drag-out fight. More than once, Williams seemed to get the better of Slade only to have the tide turn when Slade brazened—in one case may even have joked—his way out of the difficulty. Their enmity grew as they took freight up the Central Overland Stage Route, which formed after 1861, from Julesburg to Virginia City, Montana. In spite of the threats and violent attacks on each other, both survived to reach Montana, where Williams quit the company to become a rancher.

Slade returned to Julesburg and continued working for the company. He would later become involved in another violent incident that truly established his reputation as someone to avoid, particularly if he had been drinking.

Jules Beni, for whom Julesburg was named, operated the station at Julesburg and became a mortal enemy of Slade. When Beni came under suspicion for some company robberies, General Superintendent Benjamin Ficklin sent Slade to the station to deal with the situation. After just three days on site, Slade and Beni had a violent encounter when the latter took a shotgun and attempted to kill Slade. Shot several times at near point-blank range, Slade amazingly did not die, but instead developed a deep hatred for Beni, telling him some day he would wear Beni’s ear on a watch fob. Ficklin’s unexpected arrival in Julesburg probably kept Beni from being lynched by a mob that had gathered in response to Slade’s shooting.

Eventually, Slade made good on his promise, killing Beni and—so the story goes—turning his ear into a fob. At least one account says he used it as a “rattle” to entertain children when they stopped at one of the stations he managed, and for which he is most closely associated: Virginia Dale.

From Julesburg, Colorado, you can take Interstate 76 southwest toward Denver, but I recommend U.S. Highway 138 to Sterling, then I-76 through Fort Morgan to Wiggins, where you can take U.S. 34 through Greeley and into Loveland. Once there, turn north on U.S. 287 and follow it through Fort Collins, past Virginia Dale and into Wyoming.

Located along U.S. Highway 287, north of Fort Collins, Colorado, the Virginia Dale station is not accessible to the general public, but it is important for two reasons: Slade named it for his wife, Virginia Dale Slade, and he managed it successfully as the first station master until his violent temper got out of hand and he was fired from the employ of the Central Overland Stage Company, owned by Ben Holladay, who had bought out Russell, Majors and Waddell the previous December in 1861.

During his tenure as superintendent of the stagecoach line, Slade primarily worked along the southern route across Wyoming. From his home base at Virginia Dale, the stations he managed sat at intervals roughly 20 miles apart. To follow the route today, take U.S. 287 from Fort Collins to Laramie, Wyoming, and then continue west along Interstate 80 to Fort Bridger.

In most cases, the stage stations have disappeared to the hand of time, although some remain as crumbling sandstone ruins. To follow the route, I recommend a few stops such as Laramie, with its Wyoming Territorial Prison, a place Slade never saw but that housed many early troublemakers in the territory, including Butch Cassidy.

Traveling west, stay overnight at the Elk Mountain Hotel. This tiny community at the base of the mountain, with the same name that is the dominant natural feature along  I-80, has only limited shopping and services, but the hotel is a real treasure.

Fort Halleck—where Slade spent time managing the station and sometimes driving the route himself from Virginia Dale—sat just to the west of the present-day town. Nothing remains of the post, and the site is on private property.

In Rawlins, you can see the shoes made from the hide of George Parrott who, like Slade, had quite a reputation as a troublemaker that culminated in the killing of two Carbon County sheriff’s deputies and his own lynching in 1881 (after which he was skinned and the shoes made).

Just off I-80 at Point of Rocks, between Rawlins and Rock Springs, is one of the only stage stations in use during Slade’s tenure that remains standing. Now a Wyoming State Historic Site, Point of Rocks Stage Station can be reached by exiting the interstate at Point of Rocks and traveling about a half mile south of the highway. Not only can you see this station (which has recently had some restoration work), but also, if you walk less than a quarter of a mile west along the well-marked Overland and Cherokee Trail, you will find a cemetery with a newly constructed fence that boy scouts put in place to protect the pioneer-era graves, some of them reputedly the final resting places of men who Jack Slade killed.

One of the westernmost stations in Jack Slade’s territory was at Fort Bridger, the trading post first started in the 1840s by trappers Jim Bridger and Louis Vasquez to serve travelers on the emigrant trails. The site later became a military post, and today it is a state historic park with a replica trading post from the 1840s era, a restored building from the military period and the location of one of the largest Mountain Man rendezvous in the Rocky Mountains, held during Labor Day weekend.

Slade’s violent tendencies eventually became too much for his employers, and they relieved him from his duties. Jack and Virginia Slade left their home at Virginia Dale and moved west, where Jack operated an independent freight line in the Fort Bridger area for a time. But Slade may have wanted a new start, for he and Virginia soon headed north to Virginia City, Montana, a place he had first visited as a freighter for Russell, Majors and Waddell. This town is one of the West’s greatest treasures. Preserved for years by private owners, many of the important 19th-century buildings were later purchased by the State of Montana and are now managed by the Montana Historical Society.

Slade quickly established a freighting enterprise in the Virginia City area and also began operating a dairy farm along the Madison River. When drought overspread the isolated areas of Virginia City and nearby Nevada City, which then had a combined population of thousands who were looking for gold in the Alder Gulch area, Jack Slade volunteered to take a wagon train across the country and through Indian lands to get supplies.

Crossing a territory where there were no bridges across rivers—indeed not much of a road or even a trail to follow—took Slade and the volunteers who went with him roughly five months to travel from Alder Gulch to Fort Benton on the Missouri River, and then return with supplies for the town. This undertaking, completed in early November 1863, made Jack Slade a real hero in the eyes of the people who called Virginia City and Nevada City home.

Hailed a hero, Slade had a brief period of quiet living before he squared off in an argument with a local lumberman. Bystanders kept the situation from turning to gunplay, but a vigilance committee had already been formed in the community, and those men kept a close eye on Jack Slade. Eventually, they sent him a message to leave town. Before doing so, Slade resorted to his old ways: getting drunk; becoming loud and obnoxious; accosting men, possibly a woman; causing a milk wagon to overturn and spill its load; and with others, he shot up the town.

The people in Virginia City refused to put up with this kind of behavior. The vigilance committee, known as the Committee of 100, took Slade into “custody” in the night hours of March 10 or March 11. They sent him to the judge, whom he tried to shoot using a formerly concealed Derringer. Warned to leave town permanently, Slade may have finally realized he had placed himself, yet again, in an extremely dangerous situation. What he likely did not recognize was the fact that this time would be his last.

Angry miners came to town, but members of the Committee of 100 took Slade into custody once again and hanged him before Virginia could be summoned from the ranch. (Remember Williams, who Slade went the rounds with in Julesburg? He was the leader of these vigilantes.)

Virginia later claimed her husband’s body and set off to take it to his hometown of Carlyle, Illinois, for burial. She got as far as Salt Lake City, Utah, when the deterioration of the improperly preserved body led her to inter the remains in the city cemetery.

Almost certainly, Jack Slade’s best days were when he was organizing freight operations, both along the Central Overland Trail from Julesburg to Fort Bridger, and later in the Virginia City area. When challenged with a big operation, he set aside alcohol and his temper, demonstrating capable leadership. But his two-sided personality also turned to violence as he used both his fists, and more often his guns, to settle any issue, staking a reputation as one of the West’s toughest toughs.

Could he stroll into Virginia City today, he’d almost certainly invite you to join him for a drink at the Bale of Hay Saloon or to enjoy a show at the adjacent theater.