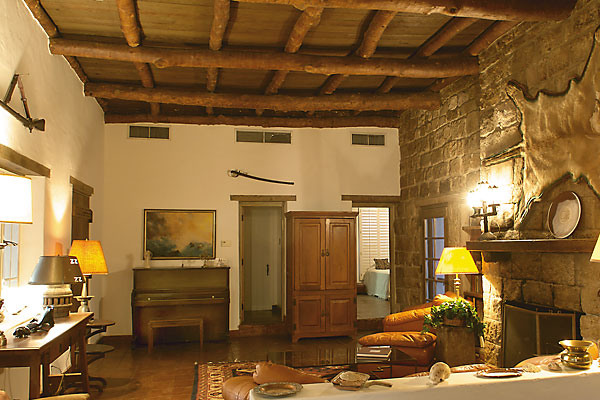 Long a sanctuary for people and animals seeking to escape scrutiny, the VO Slash Ranch near Nogales in southeastern Arizona is home to a third-generation ranch family that works to preserve its heritage, the environment and rare species.

Located just north of the U.S. border with Mexico, the ranch has a cross-border history and managing it today still comes with many challenges.

Just after Geronimo and his men surrendered to Gen. George Crook and the U.S. Cavalry in March 1886, Geronimo had a change of heart. He and his raiders roamed across this portion of the Southwest, attacking and killing Petra Peck and her baby, before taking a young relative, Trini Verdin, as a captive on April 27. They murdered a neighbor and wounded Arthur Peck. But Arthur, who then owned the VO Slash Ranch (now part of the ZZ Cattle Corporation operated by the Bells), escaped the attack and made it home. He found his wife and child dead, and Trini missing; she was later rescued by Mexican military.

In spite of his personal losses, Peck held on to the land until it was eventually absorbed by the holdings of Thomas Graham Bell, who bought an adjoining place in 1938. Soon after obtaining the property, Thomas and June Bell hired Louis Hall, a new architect trained at the University of Arizona, to build a mission-style headquarters with a unique bell tower. The doors and gates around the house feature handcrafted metalwork forged by a railroad blacksmith who earned his pay in bottles of whiskey. The bell tower, above the cedar-lined office at headquarters, was most likely inspired by June, who liked to collect bells.

Thomas and June had two sons, George and Thomas, Jr., and now their grandson, Dan Bell, is the managing partner of ZZ Cattle Corporation, which involves many other Bell family members. Dan’s cousin Scott, vice president of the corporation, monitors a scientific study underway on the ranch to track the lives and movements of two male jaguars that frequent the ranch lands. Their habitat is continually declining, making a sanctuary such as this ranch an important link to their preservation.

Dealing with endangered species while living on an international border creates its own unique challenges, Dan Bell says. Because the ranch is “in a transition zone for many animal species,” conservation groups often “petition and threaten to sue the U.S. Fish & Wildlife Service to list animal species along the border.” A problem with the Endangered Species Act, Bell says, is that it applies to the United States and species within the American borders, but it doesn’t extend across the line. As a result, a species that may have limited populations within the United States “may be abundant (and often is) where it ranges to the south, but officials are hamstrung by the border.”

For ranchers, it little matters what the animal population may be just across the border, “once a species gets listed in the area then we as permittees are required to manage for that species,” Bell says.

This is not the first time the ranch has had a role in an effort to conserve a species, notes Jim Keen in his book Great Ranches of the West. When the Sonora Chub was located in a stream on the Bell ranch, the find attracted immediate attention for the fish. While common in Mexico, the Sonora Chub had been unknown to inhabit waters in the United States. Immediate efforts were made by the U.S. Fish & Wildlife Department to protect the species, including constructing a bridge to reduce impact to the waterway and restricting livestock use near the stream. Dan Bell disapproved, stating that his cattle provided a benefit. The cattle grazing, he said, would restrict the growth of willows along the stream that would eventually take over and deplete the stream flow.

With a University of Arizona degree in range management and a life of ranching under his belt, Dan knew what he was talking about. He believes that the restrictive grazing near the stream caused the Sonora Chub to no longer exist in the stream; without cattle to check their growth, the willows flourished and the stream flow diminished, eventually disappearing entirely.

Yet the Sonora Chub may not be gone for good. It’s not uncommon for surface water to go dry during periods of low rainfall or drought, and once the flow is restored, the Sonora Chub will repopulate, says Jeff Humphrey, public outreach specialist for the U.S. Fish and Wildlife Service.

The VO Slash Ranch headquarters with its signature bell tower located above the cedar-lined office Dan works in today was built by Louis Hall, a good friend of Dan’s grandparents Thomas and June Bell. The headquarters, built in about 1939, was the first structure designed and constructed by Hall who then went on to build a home in Tucson for his brother William. He eventually became a well-known architect in southern Arizona.

Bell’s own home is constructed of hand-packed adobe from the site and later plastered. The thick walls are designed to maintain temperature with very little need for coolers or heaters, and the floor tiles are made of the same packed adobe. Among the decorative touches are hand forged hinges and latches on the doors. The fireplace is framed by rock that came from a retaining wall at an old mine located on the ranch and provides a stark contrast to the adobe walls and Arizona sycamore beams supporting the roof. Simple adornments include a rifle and saber that apparently were gifts to Thomas and June Bell from his father, although Dan knows of no story behind either weapon.

In addition to managing cattle in a way that supports wildlife species, the ranch, due to its close proximity to the Mexican border, is also a haven for illegal immigrants. This situation “poses many problems for us that other ranches do not face,” Bell says. “Fences being cut on a nightly basis, trespass cattle from Mexico entering regularly, new roads and trails being cut across the landscape are just a few [issues] I might mention.”

But there is sweeping beauty to the land, and a traditional simplicity to the ranch headquarters and old family home that make it particularly appealing.

Candy Moulton is a regular contributor to True West.