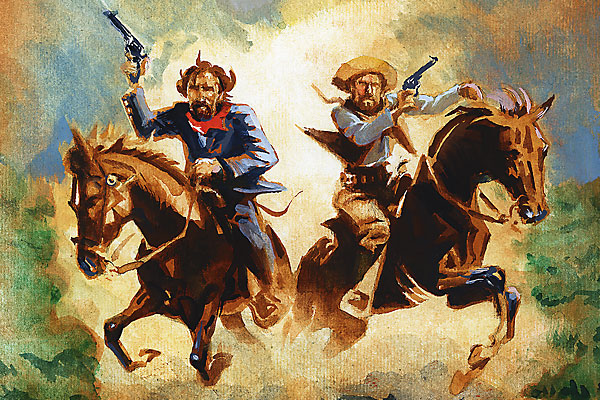 For the two Coleman brothers, it’s about to get a lot hotter.

Near 9 p.m., Milton Coleman, undersheriff of Dunn County, and his older brother Charles, the former sheriff of Pepin County, are using the last hint of twilight to look for a couple of desperate characters—Ed and Lon Williams (actually, Maxwell). The outlaws are wanted in Illinois and Wisconsin on numerous charges, mostly robbery and horse stealing, and rewards exceed $500.

The Colemans carry pistols and double-barreled shotguns—but for whatever reason, the long guns hold loads of birdshot, not the heavier buckshot that will down a human target.

They stop to talk to a couple of boys at the Dorchester house on the northeast edge of town. That’s when they spot some men headed their way from downtown. The lawmen have no idea who these guys are, but the Winchesters in their hands make them persons of interest.  Milton stays next to the fence outside the house while Charles fans out about six feet into the street and slightly behind his brother.

When the strangers get within 10 feet, Milton levels his shotgun at the man directly across from him, Lon Maxwell, and starts to identify himself. Lon fires the rifle from his hip; Milton shoots at the same time. The undersheriff drops dead, a bullet severing his jugular and spine. Lon takes the blast in his shoulder and face—but the birdshot only wounds him.

As this goes on, Ed Maxwell shoots Charles in the chest. The ex-lawman staggers a couple of feet and unloads one barrel of the shotgun, hitting the outlaw in the arm before going down to his knees. The two combatants each get off one more shot. Charles’s shot misses. Ed’s bullet shatters Charles’s right arm; he pitches into the street and dies.

As night envelops the scene, the wounded outlaws hightail it out of Durand. In the battle of brothers, the final tally is Maxwells 2, Colemans 0.

The Battle of Fox Creek

After the Maxwells dodged the Wisconsin manhunters, folks in western Illinois got nervous—justifiably. The boys had a history of returning to their old stomping grounds; this time would be no exception.

By mid-September, they were reportedly seen in Calhoun County, just a few miles from the Mississippi. Sheriff John Lammy took four posse men to a farm south of Mozier Landing on Fox Creek to investigate. Another group, led by the Pike County sheriff, was not far away.

The generally accepted version of the gunfight is that the Calhoun County lawmen spotted Lon Maxwell walking alongside the creek, carrying a rifle. Brother Ed was out of sight, a few yards ahead of Lon, armed with a handgun. The posse split up to come at the outlaws from different directions.  As they approached, Lon leveled his rifle at Frank McNabb and John Churchman, ordering them to dismount and disarm. Instead, they opened up with pistols. The Maxwells returned fire. Churchman was hit in the leg; another bullet broke his gun. Lon then shot McNabb through the shoulder, knocking him from action.

Lammy came up and joined in the fight.  The Maxwells advanced upon the officers, still firing, and Churchman decided to make a run for it. He passed the sheriff, who followed him, looking for cover. Lon leveled his rifle and shot Lammy through the head, killing him instantly. The outlaws then took Churchman’s and Lammy’s horses and escaped.

The outcome could have been much different. Two members of the posse, both armed with shotguns, hid under the creek bank and never got off a shot. In his report on the shoot-out, Deputy Churchman pretty much called them cowards.

As for Lon and Ed Maxwell, things were now way too hot for them in Wisconsin and Illinois (and Missouri and Minnesota, for that matter). They headed for another familiar spot—southern Nebraska, where their folks lived.

Amateur Blood-Seekers: No Match for the Maxwells

Members of the combined posses that cornered the Maxwells on Fox Creek contained brave citizens, but not necessarily the best men to face down vicious killers. John Churchman, 35, is an insurance salesman and Frank McNabb, 24, is a school teacher. These are the two who first confront the outlaws. Both of them do no damage with their weapons (Churchman reportedly fired seven times and hit no one) and both are wounded in the exchange of fire. Two of the posse men, armed with shotguns, cower behind cover and offer no assistance.

The lynching of Ed Maxwell horrified many citizens of Durand, who feared that it would forever blacken the name of their town. A local fortuneteller went even further, predicting that Durand would pay for its sins. It did. On Christmas Day 1881, a fire (later ruled accidental) destroyed most of the downtown. Ironically, one of the only structures spared was the courthouse (and the lynching tree), which was set apart from the other buildings. The courthouse still stands, now serving as a history museum.