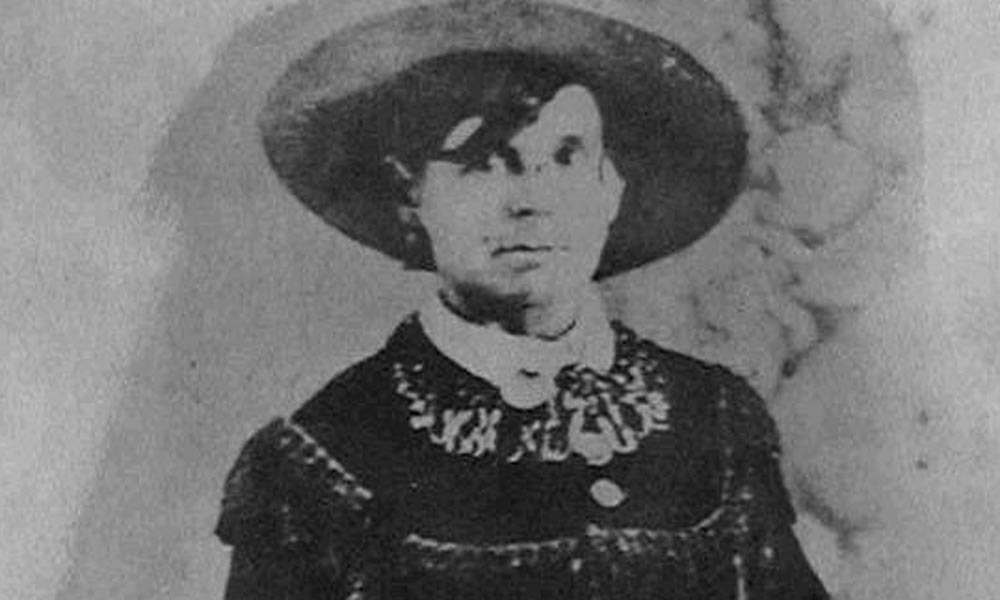 Myra Maybelle Shirley, was another Old West personality who might have been forgotten had she not been reinvented by a novelist. The so-called “Bandit Queen” has been touted as a beautiful, pistol-packing leader of outlaw gangs and having amorous adventures with outlaws like Frank and Jesse James and the Younger Brothers. It was said she bore a child out of wedlock with Cole Younger when she was only sixteen. Truth is, none of it is true.

Despite the fact that the beautiful Hollywood actress Gene Tierney played her in the 1941 movie, Belle Starr The Bandit Queen, she was described as “bony and flat-chested with a mean mouth; hatchet faced; gotch-toothed tart.”

As far as being a gang leader the most serious crime she ever committed was stealing a horse.

Born in 1849, she hailed from an affluent Southern family, raised in Carthage, Missouri in the same vicinity as the James’ boys and the Younger brothers. She was well-educated, graduating from the Carthage Female Academy and was an accomplished piano player. In other words, a bright young lady with lots of promise.

Like with so many others, the Civil War turned her life upside down. Bands of Kansas Jayhawkers and “Red Legs” rode through Missouri burning and pillaging while Rebel guerillas led by Charlie Quantrill and “Bloody Bill” Anderson retaliated, terrorizing and sacking Kansas towns. When Union troops gunned down her brother Bud in Sarcoxie, Missouri in June of 1864 and a Yankee attack on Carthage brought financial ruin to the Shirley family, they packed up and moved to Scyene, Texas.

In November, 1866 Belle married Jim Reed, whom she’d known in Missouri and two years later gave birth to a daughter she was named Rosie Lee but they called her Pearl.

Cole Younger did visit the Shirley’s home in 1864 but there is no truth to the tale he impregnated her during his stay.

Jim and Belle soon moved back to Missouri to his family’s farm where she gave birth to Pearl. He preferred horse racing to farm work and soon met a Cherokee outlaw named Tom Starr. Starr was a well-known mankiller. Soon Reed joined Starr selling illegal whiskey and rustling livestock.

Reed continued his downward spiral and before long was himself wanted for murder and robbery. Belle left her husband not only because she objected to his criminal activities but he was also having an affair with another woman. Eventually, Belle and Jim got back together and headed to California for a spell where they had a second child they named Edward. Soon Reed was back to his old ways riding with The Youngers and the Tom Starr gang.

In April, 1874 Jim Reed and the Starr gang robbed the Austin-San Antonio stage. That August he was shot and killed in Paris, Texas by a gang member turned lawman/bounty hunter.

Belle sent her two kids to live with her grandmother and she took up with Bruce Younger, an uncle to Cole, John, Jim and Bob. She was alleged to have married him in May, 1880 but she would have had to do so some fast shuffling because in June she married Sam Starr, one of Tom’s sons in June of that same year. They settled at Younger’s Bend about seventy miles southwest of Ft. Smith, Arkansas.

Their place became a favorite hangout for the numerous outlaw bands prowling the Indian Territory. Although she hosted outlaws passing through there’s no truth to the stories she ran with the gangs.

There’s no record of Sam and Belle getting crosswise with the law until July 31st, 1882 when they were arrested by the storied U.S. Marshal, Bass Reeves and charged with stealing horses. They were hauled before Judge Isaac Parker’s court in Ft. Smith in March, 1883

Parker sentenced them to a few months in a correctional facility in Michigan. She was a model prisoner but Sam spent a lot of time doing hard labor for bad behavior. After serving their terms they were back at Younger’s Bend. Along with harboring outlaws and acting as fences they did some planting and plowing.

Belle was indicted a few times but was never convicted of another crime. Sam’s luck ran out in 1887 when he died in a gunfight. Belle, never one to let any grass grow under her feet, took on another Cherokee lover named Jim July, fifteen years her junior. She could remain in Indian Territory as long as she was with an Indian.

On February 3rd, 1889 Belle was shot in the back and killed. It was pretty brutal; her assassin used a double-barrel shotgun then put another load in her face.  Her nearest neighbor, a fugitive named Edgar Watson, was accused of the killing allegedly because he feared she would turn him in.  But the charges against him were dismissed. It was also alleged her son, Ed Reed, shot her in anger because she whipped him for riding her favorite horse without permission. During the last years of her life Belle had taken up with a number of men of questionable character including Jack Spaniard, Jim French and Blue Duck. Others suspected included her most recent husband Jim July and even her daughter Pearl has been suggested. Kinda makes one wonder what Belle did to have so many people suspected of running her down.

There were no eyewitnesses and no one was ever convicted of her murder.

They say the fruit doesn’t fall far from the tree, her son Eddie became a convicted horse thief then reformed and became a lawman. He was killed in a gunfight in 1896.  Her daughter Pearl became a prostitute and later a madam operating bordellos right up to World War I.

Belle Starr rose to legendary stardom after her obituary appeared in the New York Times. Richard K. Fox, publisher for the National Police Gazette, saw it and wrote a novel that came out the same year she was murdered titled Belle Starr the Bandit Queen or the Female Jesse James.  It was the first of several that embellished and re-wrote her life as a small time outlaw transforming her into a megastar.