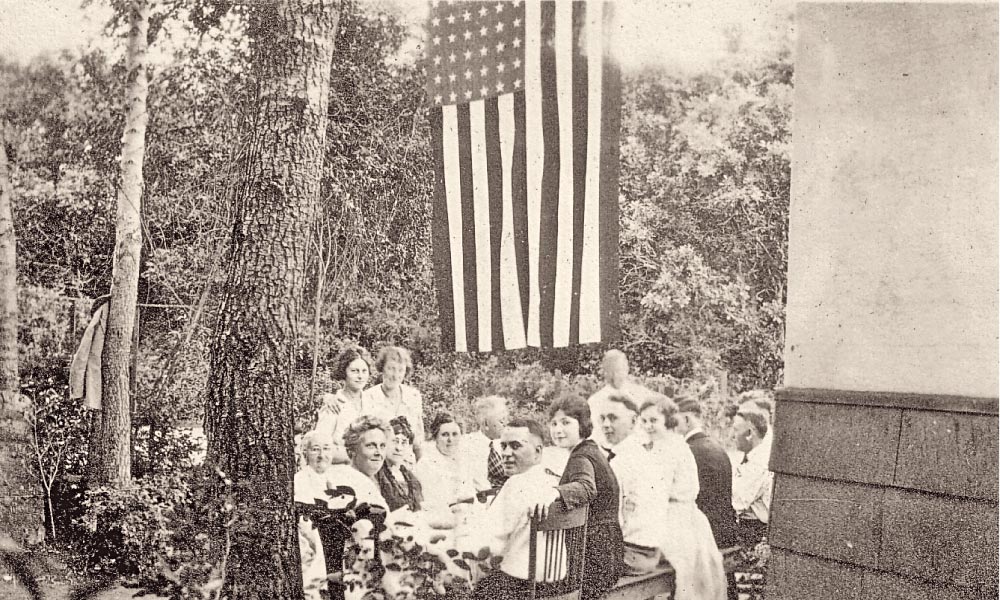 As towns across the frontier West heated up during the spring and summer months, sweltering pioneers found ways to beat the heat at picnics.

They cooled off by eating outside under a shade tree or covered porch, in the countryside or at a park. Those who lived near refreshing rivers, cool lakes and babbling brooks enjoyed waterside dining, swimming and boating.

Picnics were mostly group affairs. Families, friends, businesses and civic organizations organized the al fresco meals. The St. Louis Post-Dispatch wrote a comical story about picnics in 1896, reporting, “…the family picnic is held whenever ‘papa’ is seized with that particular yearning, generally attributed to the weather, to go out under the trees, far from the madding crowd and communicate with nature as when a boy, or ‘mamma’ agrees with the children that fresh air away from the city is what they need, and that she needs rest herself.

“‘Papa’ usually returns with a desire to commit murder if only he could summon strength to his exhausted frame and ‘mamma’ vows she’ll never leave home again. The picnic disease is most prevalent at exactly this time of the year.”

Teenagers sometimes shirked routine responsibilities to get this food in their bellies. Frank Dixon, of Hastings, Nebraska, recalled: “On Sundays [we] went to church or at least Sunday school…. In the summer we were a little slack on this as picnics down on the river were so much the go. Nearly everyone went and in big bunches…. We would hire a wagon or wagonette or hayrack, all chipping in. Then would buy pop or ice cream. Then the girls would furnish the eats. Ham and cheese sandwiches, pickles, hard boiled eggs and cakes.”

The pioneers spread blankets or sheets on the ground and set up the picnic dishes for everyone to enjoy at their leisure. For entertainment, folks played cards and outdoor games, and danced to music played on banjos, trumpets or whatever instruments they had on hand.

Mary Doom, who moved to Ashland, Nebraska, in 1856, remembered the fun times: “Big picnics and gatherings were held in the old park at Ashland with all kinds of games and speaking. The ladies would have nail driving contests, and the one who drove the most nails the quickest got a prize. The men and boys had potato races, sack races and foot races. The sack race was funny because they looked so awkward and often fell down.”

After all the fun and games, and fights and tears, one turned to the cold picnic pie and cooled off from all the heat—internal and external—swirling about.