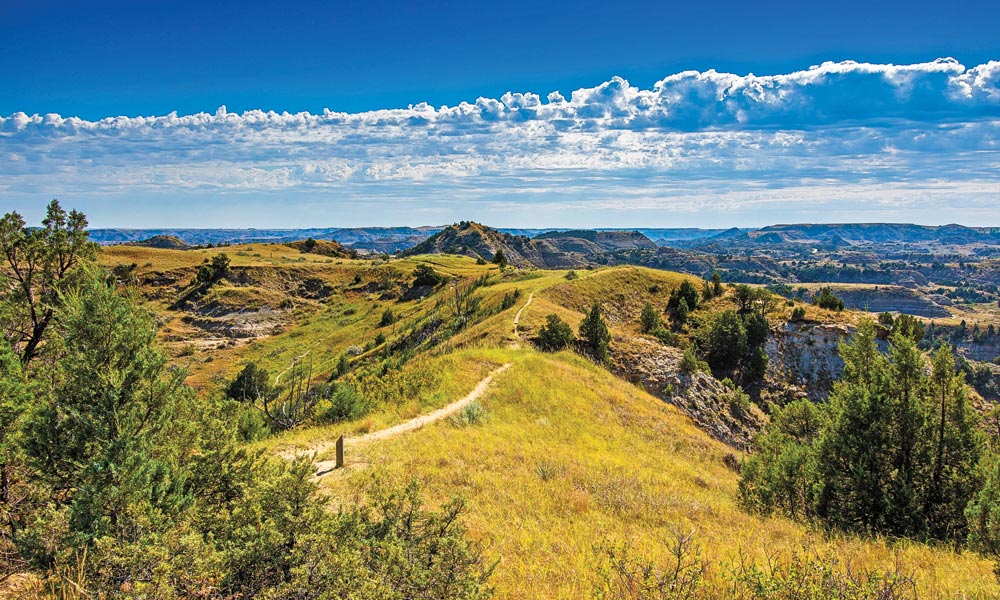 He was known as a man of action, speaking softly but carrying a big stick. He led a group of volunteers called the Rough Riders to victory and fame up Cuba’s San Juan Hill in the Spanish-American War. As President, he preserved over 230 million acres of land for the American public, and was affectionately known to be the inspiration for the Teddy Bear.

Theodore Roosevelt (he refused to be called “Teddy”) was a man of high principles and ideals, a force to be reckoned with. As a child and young adult he suffered from asthma and intestinal ailments, hardly the robust model of living what he later called “the strenuous life.” He wore glasses and his voice was high-pitched, sometimes described as a “squeak.” So what changed this reedy young man into the imposing figure that gazes down at us from Mount Rushmore?

The American West. Especially the Badlands of Western North Dakota that today bear his name as Theodore Roosevelt National Park.

Roosevelt loved the frontier and the wide open spaces. Davy Crockett and Daniel Boone were his childhood heroes, and when he was given the opportunity to hunt buffalo in the Dakota Territory (what is now North Dakota), he leapt at the chance. The small hamlet of Little Missouri, located next to the river of the same name, consisted of a saloon, general store and a ramshackle hotel when Theodore arrived by train in September 1883. Across the river a new town was being built by French aristocrat and former soldier, the Marquis de Morès, who named it Medora, after his wife. He was building a hotel, a newspaper office and a slaughter house to process cattle from local ranches before shipping them to Eastern markets in refrigerated train cars.

The day after his arrival, Theodore began his quixotic hunt for the shaggy beast. His unending enthusiasm and energy, even after several days of unsuccessful attempts in miserable, rainy weather, were finally rewarded when he shot his prized buffalo. Before leaving for New York, Theodore purchased the Maltese Cross Ranch, along with its cattle.

Five months later tragedy struck when Roosevelt lost both his wife and his mother on Valentine’s Day. As his current term in the New York Assembly had ended, a grieving Theodore left for the Dakotas. Over the next three years, he allowed the region to heal his heart, harden his body and give his spirit new motivation to do what was right.

Theodore once said he never would have been President if it hadn’t been for his time in the West. It wasn’t hyperbole; it was the truth. During his time in the Dakotas, he learned that your word is your bond, a promise is always kept, you carry your own weight without asking for a handout and you ride for the brand. He earned the respect of the local cowboys and ranchers, who adopted him as one of their own.

Although it’s been over 130 years since Theodore Roosevelt trekked over this region, today you can easily follow in his footsteps in Medora and its surrounding areas. Visiting this part of the country, you understand why he fell in love with its “desolation, and grim beauty.”

The town of Medora became a faint shell of itself after the Marquis left town in 1887. But all that changed in 1963, when Harold Schafer, owner of the Gold Seal Company, stepped in and formed the Theodore Roosevelt Medora Foundation. Schafer loved the area and began buying up many of the buildings, refurbishing them in order to make Medora a popular tourist attraction, in combination with Theodore Roosevelt National Park.

Rough Riders Hotel, which was originally called the Metropolitan when it was built in 1885, was completely rebuilt by Schafer and expanded in 2000, and all rooms now include a “Teddy Bear Rough Rider.” The hotel’s restaurant, aptly named “Theodore’s,” is a must for breakfast, lunch or dinner. Lining some of the walls are framed original letters from Theodore to his long-time Medora friends, Joe and Sylvane Ferris.

At the corner of 5th Street and Broadway stands the Von Hoffman House, which served as the residence for the parents of Medora de Morès. During the summer season visitors can tour the home, which boasts period furniture, and take a walking tour titled Footsteps Into Medora’s Past, which departs daily from the Von Hoffman House. It is a great way to learn the town’s history and its people.

The park at 3rd Street and Broadway was the site of “Bob Roberts Bug Juice Dispensary and Town Hall.” It was there that Theodore presided over quarterly meetings of the local stockmen’s group. Next door is the current town hall, which in the summer offers a daily one-man presentation honoring Theodore’s memory.

The Chateau de Morès Interpretive Center offers displays of many personal items belonging to the Marquis and his family, as well as one of his original Medora-Deadwood stagecoaches. From there, visit the Chateau, a 26-room house the Marquis built on a bluff overlooking Medora. All the items in the house are original, just as the Marquis left them in 1887. During the summer season, you can experience historical re-enactors as they portray local figures talking about their time in the town, or you catch a stagecoach ride along the river bottom land.

At night, head to the Burning Hills Amphitheatre for the Medora Musical, a high-spirited, toe-tappin’ stage production that has entertained audiences for the past fifty years.

The entrance to the South Unit of Theodore Roosevelt National Park, which opened to the public in 1947, is in Medora. The park is broken into three units: South Unit, Elkhorn Ranch site and North Unit.

As you enter the South Unit, stop at the visitor’s center for information on where you might see buffalo and wild horses. Be sure to catch the center’s short film about Theodore’s time in the Dakotas, and view some of his personal items, including gifts he bestowed to his longtime Medora friends.

Behind the visitor’s center is Theodore’s Maltese Cross Cabin. He lived in this cabin (the original location is 15 miles south of the park) during 1884, and inside you’ll find his canvas trunk complete with his initials, his writing desk, bookshelf (a prodigious reader, he consumed two books a week) and his rocking chair.

The park offers a 38-mile scenic loop drive, where you’ll see many prairie dog towns. These little animals, which Theodore called “noisy and inquisitive,” are a delight to watch, and listen to as they squeak to communicate with each other. Buffalo herds also are plentiful, but are always on the move as they graze. Four hundred bison reside in the South Unit, while 200 are at the North Unit. Wild horses are another treat for tourists, especially in Spring, when the colts and fillies are born. The Boicourt and Badlands Overlooks offer the best views of the park, where you can stop and just listen to the sounds of nature. You won’t be disappointed. During the summer several ranger programs are available; be sure to check at the visitor’s center for information and times.

Theodore’s Elkhorn Ranch site is a 45-minute drive west of the park (get directions at the visitor’s center). It’s an easy walk from the parking area with no inclines along a mowed pathway through the grass. Carry ample water as there are no resources at this location. Of the three units, this is the least visited, and it is a shame such beauty is overlooked. Theodore built his second cabin here after finding a pair of elk skulls locked together from a long-ago battle. This find gave him the inspiration for its name, “Elkhorn Ranch.” The cabin, made from nearby cottonwood trees, has long since disappeared, but inside the surrounding fence one can see the six stone blocks that served as the cabin’s foundation. A gate allows you to walk inside the area, giving the visitor an idea of the cabin’s size. Spend a few minutes here to drink in the solitude as you realize that little has changed since Theodore’s time. You can understand why he loved to sit on his porch in his rocking chair, watching the Little Missouri River wind its way along its banks, while listening to the meadowlarks sing and the wind rustle the leaves of the cottonwood trees.

The North Unit is an hour’s drive north from the South Unit via Highway 85. At the North Unit you will find the largest concentration of the geological curiosity known as “cannonball concretions.” Millions of years ago, sand grains from ancient river deposits were cemented together by minerals dissolved in the groundwater, and shaped into the form of their namesake. In addition to the herd of buffalo, a small band of Longhorn cattle call the North Unit home. The rangers at the visitor’s center can tell you where you might spot the cattle on any given day. Along the 14-mile drive, look for the signs pointing to the edge of the glacier pullout from the last Ice Age. Both the River Bend and Oxbow overlooks offer breathtaking views of the valley and the Little Missouri River below. Looking down at the river, one can imagine Theodore’s famous watery pursuit after boat thieves in a chilly February 1886.

Thirty-eight miles east of Medora is the city of Dickinson. While the buildings from the 1880s have long since disappeared, there is one stop any admirer of Roosevelt must make. In front of the Stark County Courthouse, at Simms and 3rd streets, is a detailed sculpture by Tom Bollinger featuring a young Theodore Roosevelt dressed in his buckskin shirt and chaps, standing on a soap box with speech in hand. The statue is located on the exact site where Theodore gave one of his first public speeches on July 4, 1886.

For all of his life, Theodore Roosevelt had an abiding love affair with the American West. His love of the West is demonstrated not only in his actions, but also in his writing. When he wrote about riding in the badlands in the early hours, as the sun was breaking over the horizon, it wasn’t just a picture he was painting; it was his heart speaking the truth.

The American West transformed Theodore Roosevelt, and he returned the favor by protecting it and instilling in others the love he had for it.

Michael F. Blake, a two-time Emmy-winning makeup artist, is the author of The Cowboy President: How the American West Transformed Theodore Roosevelt, which will be released in Spring 2018 by Two Dot Press.