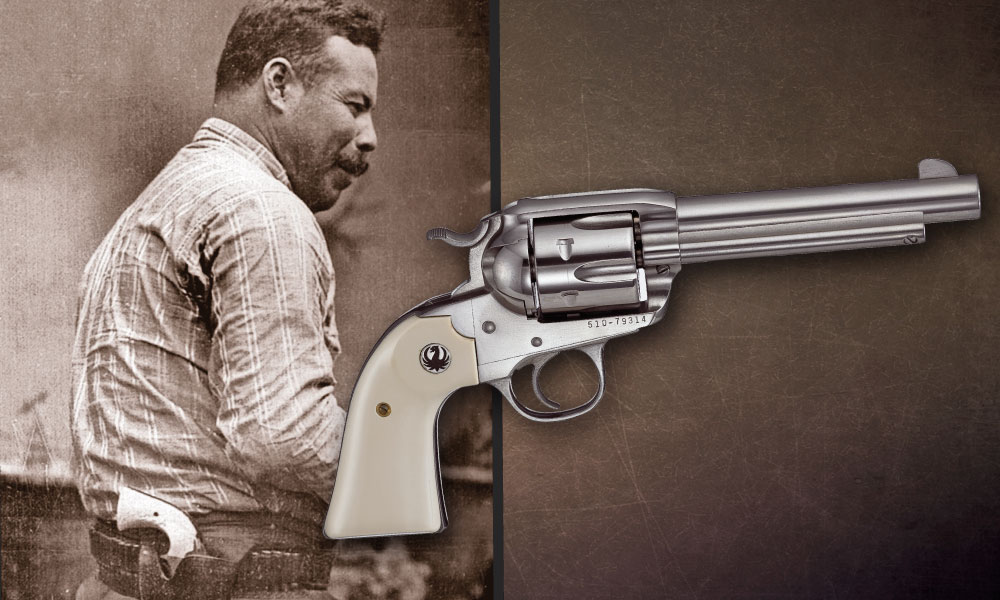 Since its introduction in 1993, Ruger’s Vaquero single-action has ranked among the most popular of six-guns with cowboy action shooters and cowboy mounted shooters, alike. The combining of Old West tradition externally and rugged state-of-the-art-technology in its inner workings have made the Vaquero a handsome and durable six-shooter for today’s sportsmen. Besides the standard peacemaker-styled revolver, Ruger offers a Bisley version of the Vaquero—a sleek-looking hogleg that traces its beginnings to the last decade of the 19th century, when the sport of target-shooting was reaching a peak in popularity and many firearms companies were introducing target versions of their guns.

Because sport shooters of the late 19th century were looking for improvements in Colt’s 1888 Peacemaker Flat Top target variation, Colt designers worked with serious target-shooters to design an improved “special target” revolver, which was introduced in 1894. The first of these new, and different-looking flat top, target-sighted handguns were shipped to Colt’s London agency. This latest model’s spectacular performances in England’s famous target matches, held at Bisley Common outside of London, led to Colt’s renaming the revolver the “Bisley” model. The gun, made in both flat top and the more traditional rounded top strap versions, was quickly accepted by many of the best-known target-shooters of the era. The Bisley, with its redesigned frame quickly eclipsed the older target revolver, ultimately leading to the earlier flat top’s discontinuance.

For the next two decades, this slick-looking six-shooter was used by cowboys, sportsmen, adventurers and target-shooters. The Bisley’s rakish, low-profile styling, balance and fast-handling characteristics made it a popular arm—especially in the American Southwest and in northern Mexico. The Copper Queen Construction and Mining Company in Bisbee, Arizona Territory, bought Bisleys. California stage robber—later turned Canadian train robber—Bill Miner (depicted by actor Richard Farnsworth in the 1982 Western The Grey Fox) packed a 5½-inch Bisley in .41 Colt caliber. Mexican Revolutionary hero Pancho Villa is known to have owned several Bisleys throughout his colorful career.

Discontinued in Colt’s advertising in 1912, assembly of Bisley models continued until mid-1915, although guns were shipped from the factory as late as November of 1919. The term “hogleg,” which is often used when referring to the standard Colt Peacemaker, reportedly stems from the old-timers’ nickname for the Bisley’s grip.

Ruger’s Bisley Vaquero carries on the tradition of the original model, with its distinctive low-hammer profile, longer grip style and large trigger guard, but with the addition of Ruger’s modern coil main spring, transfer bar safety and other state-of-the-art features. Offered in what the company calls “Gloss Stainless,” stainless steel—which looks almost like nickel-plating—the Bisley Vaquero is currently offered in the popular 5½-inch barrel length and is rifled with a fast 1-in-16-inch, right hand rate of twist.

Currently offered in .357 Magnum and .45 Colt, Ruger Bisley Vaqueros come standard with rosewood grips, however several models can be ordered with Ruger’s simulated ivory gunfighter two-piece grip panels. With a weight of 41 or 45 ounces—depending on caliber, the Bisley has that familiar Ruger six-gun heft, combined with a touch of the old-time Bisley feel. Six-gunners of just about any discipline should appreciate the Ruger Bisley Vaquero’s straight shooting, rugged construction and easy handling qualities. For more information, go to Ruger.com.

Phil Spangenberger has written for Guns & Ammo, appears on the History Channel and other networks, produces Wild West shows, is a Hollywood gun coach and character actor, and is True West’s Firearms Editor.

For 55 years John Bianchi’s holster designs and top quality craftsmanship have been considered the standard by which all gun leather is judged. Frontier Gunleather now offers full custom design service to its world clients, from personal concealment holsters to full-size Western gun belts. A complete color catalog is available.
FrontierGunLeather.com

American Legacy Firearms is a family owned company specializing in hand-made limited-edition, engraved firearms made in the USA. The goal has always been to deliver affordable, quality, engraved firearms. They are proud to offer a special “Gunfighters” series, reminiscent of Doc Holliday, Billy the Kid, Tom Horn and Wyatt Earp.
AmericanLegacyFirearms.com

Uberti’s extensive line of traditional guns allows shooters to experience the Old West through authentic reproductions of the era’s fabled firearms. Favored by cowboy-action shooters, collectors and hunters worldwide, Uberti replicas combine the finest materials with modern craftsmanship to achieve the look, feel and reliability by which all other guns are judged.
Uberti.com

Rediscover a legend! Shiloh Sharps Rifle, a family owned business established in 1976, is the recognized leader in the quality production and craftsmanship of the Sharps Rifle. The rifles are All American-made, and their parts are interchangeable with the original Sharps rifles.
ShilohRifle.com

The Model 73 is world-renowned as “The Gun that Won the West.” Now you can own the real thing—a genuine Winchester Repeating Arms® Model 73 with an oil-finished walnut stock, classic blue steel crescent buttplate and a 20-inch-round barrel, just like the original.
Winchester.com

Rock Island Auction Co. has been the world’s number one firearms auction house for eleven consecutive years. With eight firearms auctions per year and a state-of-the-art 86,000-square-foot facility, the company prides itself on presentation and bringing consignors the most money.
RockIslandAuction.com

If you want to see all of The 100 Best Historical Photos of the American Cowboy, buy our January 2016 issue here!