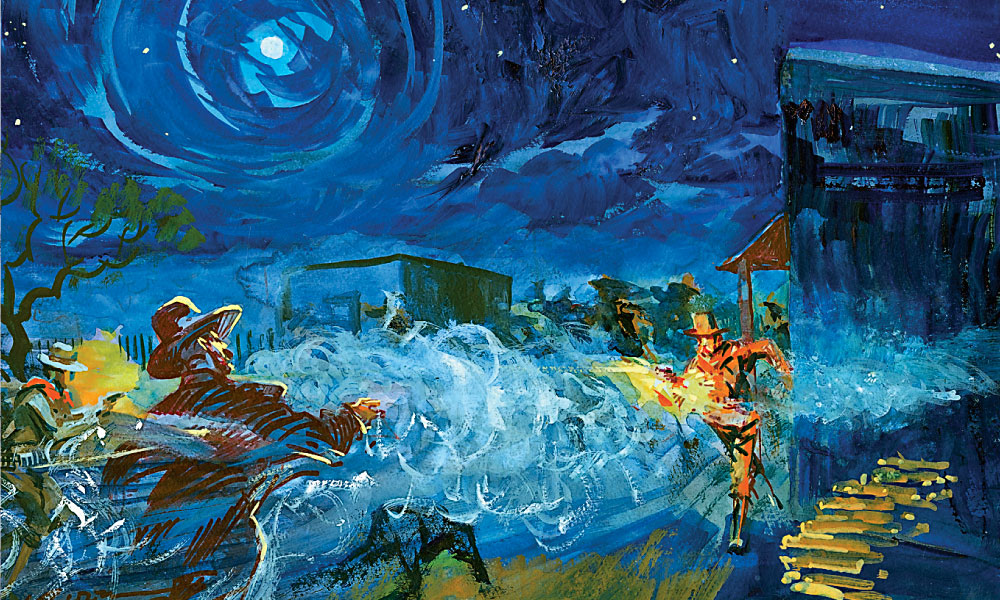 Hogtown is full of cowboys from surrounding Texas ranches at a baile (a gathering for dancing).

After midnight, in the early minutes of Sunday, March 21, 1886, four cowboys from the LS ranch—Ed King,  Frank Valley (Vallé), Fred Chilton and John Lang—leave the red light district and head for Upper Tascosa, where King is meeting up with his new girlfriend Sally Emory. While King heads to the corner of Spring and Main Streets, Valley, Chilton and Lang hitch their horses in front of the Equity Bar.

As he dismounts, King is hailed by someone in the shadow of the Dunn & Jenkins Saloon. When he steps on the porch, he is shot in the face. Len Woodruff, the saloon’s bartender hired by Jesse Jenkins and Emory’s paramour before King, rushes out of the darkness and shoots again. Hit in the neck this time, King dies almost instantly.

As King’s girlfriend flees down the street, Lang calls his two LS buddies out of the Equity Bar; they rush to Dunn & Jenkins. Seeing no one out front, they run to the back just as Woodruff, Louis Bousman, Charlie and Tom Emory, and John “Catfish Kid” Gough exit the back door of the saloon.

Gunfire erupts, with Woodruff and Charlie Emory the first to be hit. Valley runs to an adobe shack and, as he opens the door, he is fatally struck in the eye by a bullet. Chilton shoots restaurant owner Jesse Sheets in the face; the innocent bystander falls dead.

Chilton is shot down himself, in the chest, by someone hiding behind a woodpile outside the saloon. Dying, Chilton hands his pistol to Lang who, caught alone in a cross fire, retreats up Spring Street, firing as he goes. Although bullets are whizzing past him and churning up the dirt at his feet, he makes it back to the Equity Bar, as more of his friends are departing.

The LS cowboy is joined by James East and his deputy, Charlie Pierce. They all head to the Dunn & Jenkins Saloon, where they shoot at a shadowy figure running out from the woodpile. The Catfish Kid goes down, groaning and choking.

As the men search the area for more shooters, Catfish Kid crawls off unhurt. He has faked the hit.

Townsfolk in Tascosa, Texas, edged to the scene of the carnage to see “who had kicked the lid off Hell.” Justice of the Peace Edwin C. Godwin-Austin assembled a coroner’s jury that concluded: Jesse Sheets was shot high up on the forehead and died almost immediately. Ed King was killed by a shot near the mouth and neck. Fred Chilton was “shot through several times” and died. Frank Valley was shot near the nose and lingered for more than an hour. Locals had to tie his feet together to keep him thrashing around as he struggled for breath. He cashed in.

Murder charges were filed against Len Woodruff, Louis Bousman, Charlie Emory and John “Catfish Kid” Gough. The first trial ended in a hung jury. In the second, all the men were acquitted. The Catfish Kid died in prison in 1890 after killing an unarmed man in another incident in Tascosa. Charlie Emory died in 1897. Woodruff moved to Hot Springs, Arkansas, where he died in 1902. Tom Emory died in 1914. Bousman died in Oklahoma in January 1942.

The surviving LS Ranch cowboy, John Lang, went on to become town marshal in Amarillo, Texas, for a short time before rejoining his family in Oregon, reports Lang family records. In 1897, he participated in the Klondike Gold Rush. The next year, he joined the Oregon Volunteers and served in the Philippines during the Spanish–American War. After the war, he returned to Oregon. A long-time Democrat, Lang represented his district in the Oregon legislature. He also served as mayor of Haines. From the 1900s until the 1930s, he tried his hand as a gold prospector. He died on April 4, 1942.