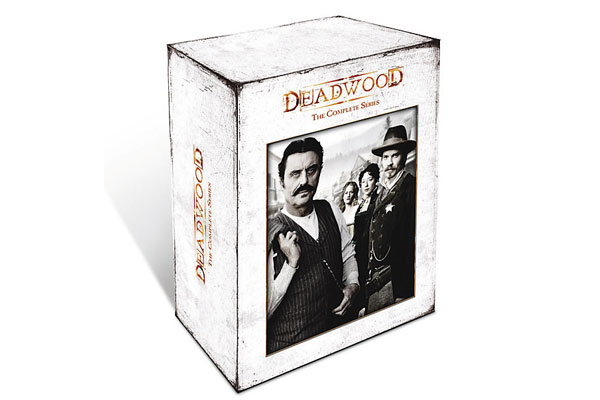 David Milch’s Western series, a once-in-a-generation event, ran on HBO for three seasons. Like the cable channel’s other prize-winning project, The Sopranos, Deadwood took great chances and broke boundaries, twisting genre conventions into new shapes, but without satire or malice.

In a hypothetical room full of Westerns buffs, you would find as many passionate fans of Deadwood as there are angry detractors. The degree of reaction, pro or con, is really an acknowledgement of the series’ remarkable originality.

It’s true that a lot of viewers were put off by the characters’ profanity, which was abundant, to say the least. The dialogue was dense, oddly composed and required a lot of careful attention. And Deadwood has been compared with Shakespeare on more than one occasion.

Some objected to the brutality and violence in the show. Milch was determined to avoid sugar-coating life in the South Dakota boomtown, at the crest of its famous gold strike. Even though the series was shot on Gene Autry’s Melody Ranch in Santa Clarita, California, Autry would have had trouble recognizing this newer and far nastier version of the Wild West. The show was a challenge to Westerns fans and viewers in general, and it took some getting used to.

That said, Deadwood’s defenders loved the language, the grit and gore, and the parade of grotesque characters. Many enjoyed the challenge of seeing old ideas reinvented. Milch and The Soprano’s David Chase both understood that monsters are more interesting than the knights who slay them.

Like it or not, Deadwood was a milestone not just for the chances it took, but because it created a new window into American history and character. The series can rest on the shelf next to books by Joseph Conrad, Herman Melville and Mark Twain; and as cinema, it can stand beside The Godfather, The Wild Bunch and Robert Altman’s McCabe and Mrs. Miller.

The box set has two hours of new features, which include Milch discussing how he would have liked to finish the series (“The Meaning of Endings”). The creator wanders the set, telling us about the fires and the flood he would have shown in the fourth season (“no locusts or frogs,” he says), and how he had a hankering to introduce the father of John D. Rockefeller. Milch remains bitter about the cancellation of the series; he confesses, “I find all this infinitely depressing.”

Other featurettes include a look at the historic Deadwood, a tour of the set, intercut with clips, and a panel discussion with the creator and cast.

The funniest new extra on the disc is a sequence in which Titus Welliver, who played Al Swearengen’s man Silas Adams, does an impression of Milch auditioning different actors for the part of Swearengen, intercut with his impressions of Al Pacino, Christopher Walken, Robert Duvall and Robert De Niro. Welliver nails all five of them.

For those fans of the show who already bought the single-season boxes, these are still good and full of extras that are present in the new set.