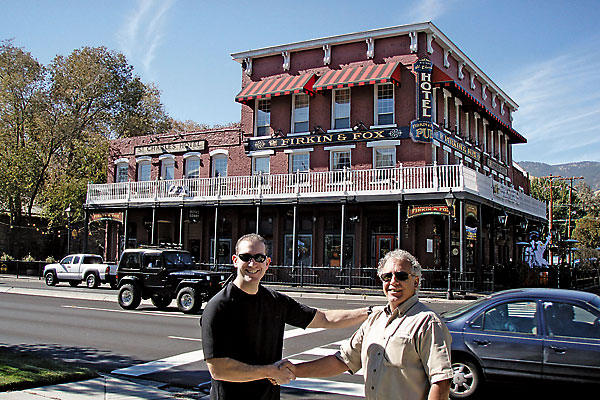 You have to go back some 146 years—back to the days of Nevada Territory—to hear the kind of bragging about the St. Charles hotel that is common today.

It was such a grand building for Carson City, and its developers made sure everyone knew it: “We have the largest and best hotel building in the Territory,” they boasted in an ad that ran on October 2, 1862—two years before Nevada was welcomed into the nation as the 36th state. This hotel had the town’s first electricity, first gas utilities and was a centerpiece of the community.

The three-story brick building sat in the heart of town, across the street from an empty lot that today is home to the State Capitol. The hotel’s original owners probably never dreamed it would end up with six names and 16 owners; nor that it would decay into a “flop house”—with a kitchen so bad, it was called a “slop house”—and its beautiful bricks covered in plaster. No, the founders knew they were building something special. How gratified they would be to see that the St. Charles Hotel again has bragging rights.

This is the oldest, continuously operating hotel in all of Nevada—yes, even in its seedy days, it was still a hotel. The St. Charles is also the second oldest building in the state still standing, while so many others built in its era have been torn down. Just as the hotel gave a focus to the small Carson City mining and lumber community in its day, today it’s helping rejuvenate a historic downtown as a centerpiece of the community.

People who call Carson City their hometown—including a former high school swimming champion—saw how much life was still left in the grand place.

The first “saviors” of this historic building were Mark and Jenny Lopiccolo—he a builder and remodeler with his own construction company; she a realtor who’d become the “driving force” behind the hotel’s rebirth.

“I’m the kind of person who thinks anything is possible,” says 54-year-old Mark, who moved to Carson City from the Bay Area in 1975. “The old historic past of Carson City is why I moved here. I love old buildings, and I don’t want to see them torn down.”

In Carson City, he met Jenny, who shared his passion for the town’s original buildings. They were married in 1996. Since then, they’ve been a major factor in assuring old Carson City doesn’t get bulldozed away. The couple owns several downtown buildings, and Mark has spent nine years serving the town’s Historical Review Commission and also is active in the Carson City Consortium of business owners intent on breathing new life into downtown. With the pride of a papa, he brags, “We have a pretty famous historic district that’s a big tourism draw.”

About 15 years ago, Mark started daydreaming about getting his hands on the St. Charles Hotel. He bought it in 2004 and got right to work. “We gutted it to the dirt,” Mark says. He found the building had been patched and repaired and tinkered with over all those years—some of the work was so shoddy, it was held together with little more than “duck tape and bailing wire.” He and Jenny put in new plumbing and electricity, central heat and air (“before, the heat came through wooden ducts,” he says); they replaced the columns that were part of the original design of the buildings and added new iron fences.

He estimates they’ve spent more than $1 million so far and notes “this is a continuing project—that’s the way old buildings are. I don’t know anybody who would have put the time and love into it that we have.”

Since the ground floor had traditionally been a restaurant, it “sat empty for two years before we found the right person,” Mark says, “we needed someone who had the same feeling about the building as we did, and Jim Phalan was a perfect fit.”

Phalan is a hometown boy and former high school swimming champion who sold a wireless Internet company and went into the restaurant franchise business. He and his brother Jeff chose one out of Canada that features an English pub theme.

“I knew Mark and Jenny didn’t want just any restaurant—cheap tables and a coat of paint weren’t going to be enough,” Jim says. “I knew there was a lot of work to be done.”

The brothers signed a long-term lease with Mark and Jenny. In January 2008, they opened the Firkin and Fox on the first floor of the St. Charles. The response, Jim says, has been “awesome,” even though they opened in the midst of a serious economic downturn.

“When I was growing up here, we wanted a place to hang out and party, and there was no place in town; we had to go to Reno,” Jim says. “Now we’re getting people from Reno and Tahoe coming to Carson City to eat at our restaurant.” He’s not only happy about his own business success, but also about how the restaurant and remodeled hotel have helped “kick-start” other downtown business improvements.

Last May, the state’s historic preservation office said what Mark and Jenny Lopiccolo and Jim and Jeff Phalan have done is an “excellent example of adaptive reuse of a historic resource.”

Those original, optimistic men who built the hotel 146 years ago, what would they think? Mark says simply, “I would hope they’d be proud.”