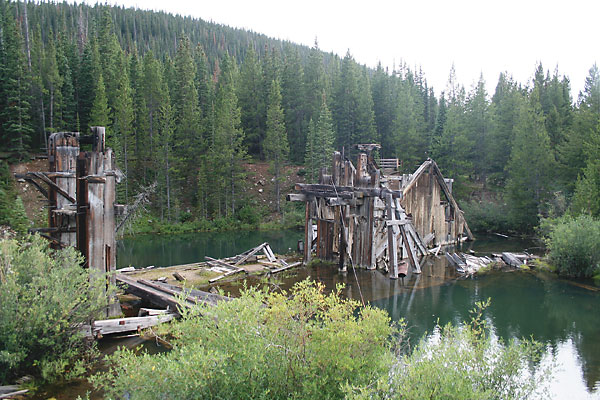 Sitting in historic Lawrence, I don’t know why those fortune seekers of 1859 ever left Kansas.

There’s gold right here, and it’s delicious, as I hoist a Copperhead Pale Ale at the Free State Brewing Company.

Then again, the lure of a fortune, the coolness of Colorado’s Rocky Mountains and the opportunity to get away from obnoxious Kansas Jayhawks fans could pull anyone westward.

This year marks the 150th anniversary of one of America’s major gold rushes. Alas, people tend to forget all about the Pikes Peakers. They remember instead those hardy 49ers of the decade before and the Klondikers at the close of the 19th century.

The rush to Pikes Peak started in January 1859, when prospector George Jackson found gold near present-day Idaho Springs. The financial crash of 1857 had left many in the East and Midwest without jobs, so prospectors and wannabe prospectors flocked to the Rockies, heralding “Pikes Peak or Bust.” Many returned heralding, “Busted, By God,” but not before they helped establish mining camps like Denver City and Boulder City. Other burgs boomed and died. Some boomed, died, then rose again.

Gold seekers had been exploring Colorado’s mountain streams for a couple of years, but Jackson’s discovery proved primarily responsible for the thousands of men and women who raced to the Rockies. The rush didn’t last long, but there’s still gold in them hills—if you know where to look for it.

Of all the routes to the goldfields, I have opted to take the southern trail. I leave Lawrence for the Santa Fe Trail where there’s plenty of gold to be found, I think, as I stare at those amber waves of grain on the way to Fort Larned. Georgian “Green” Russell and a bunch of tag-alongs came this way in early 1858, and many others followed.

They probably thought that they had found gold when they reached Bent’s Fort. And why not?

Originally founded in 1833 by the Bent brothers, William and Charles, and Ceran St. Vrain, this was the only permanent white settlement along the old Santa Fe Trail between Missouri and New Mexico. By 1849, the fort was abandoned, and it pretty much faded into oblivion. But those golden adobe walls were reborn when Congress established Bent’s Old Fort as a national historic site in 1960. Sixteen years later, a reproduction of the fort—based on historical drawings and writings and archaeological data—opened its doors to history buffs galore and travelers sick of U.S. Highway 50. The fort is out of the way, east of La Junta, Colorado, on the windy and remote Highway 194. Visiting the fort is like stepping back in time.

From Bent’s Fort, I give U.S. 50 a few more miles before hanging my hat in Pueblo. From the revelry going on downtown and along the River Walk, somebody here must have struck gold and is buying drinks for everybody.

First stop in Colorado Springs is the Ghost Town Museum. Formed in 1954, the museum brought in buildings from abandoned towns across the region to re-create a ghost town full of pertinent artifacts. Best of all, if you’re here during a blizzard, the museum is indoors. Even the stone building is historic, built in 1899 as a workshop for the Colorado Midland railroad.

Most buildings and artifacts are from the 1890s silver boom, but it’s still a fun museum (especially for kids) for you to get a sense of Colorado’s ample mining heritage. The eight-minute film I catch on the way out focuses on the Pikes Peak rush.

Colorado Springs is full of riches. Like the food and rooms at the Broadmoor or Cheyenne Mountain Resort. Like Pikes Peak itself, Garden of the Gods or Manitou Springs. I strike gold when I venture downtown and find a parking space right in front of the Colorado Springs Pioneers Museum, the best place to learn about the 1859 rush.

Located in the 1903 El Paso County Courthouse, the museum is presenting a special exhibit on the gold rush that runs through August. “We’re taking the approach of using real people who came to the Pikes Peak region to use them to tell this story,” says Carol Kennis, the museum’s public programs coordinator.

The exhibit shares the stories of people like Julia Archibald Holmes, the first woman on record to climb Pikes Peak. She did it in her bloomers. It isn’t Julia’s, but there is an authentic bloomers costume on display, along with plenty of Pikes Peak-era glass bottles and guidebooks.

Yet the exhibit isn’t just about gold seekers. “Number One,” Kennis says, “people were living here, and this was their home. The Ute Indians, and the Cheyenne and Arapaho lived here—the Utes don’t have a migratory story in their oral history—and [the gold rush] affected their lives.”

From Colorado Springs, I head north to Denver, where the discovery of gold at the confluence of Cherry Creek and the South Platte River led to the founding of Denver. That historic discovery site is now Confluence Park in lower downtown, alias LoDo, which has also undergone a boom in recent years.

Gold is on display at the Denver Museum of Nature and Science, including the 13 plus-pound chunk, dubbed “Tom’s Baby,” that Tom Graves and Harry Lytton found near Breckenridge in 1887. But I strike it rich at the Brown Palace Hotel, home to the most comfy beds in the Rocky Mountain West, not to mention it is also home to that delicious pan-seared trout washed down with a tasty Flying Dog Golden Ale at Ship Tavern.

Next morning, I?head deep into the mountains to find the real gold towns.

Uh-oh, I must have made a wrong turn. After experiencing the gold of Golden (no, I don’t mean just the Coors Brewing Company tour), I was supposed to drive into 1859 gold towns Central City and Black Hawk. But this looks like … Las Vegas?

Central City and Black Hawk, however, haven’t smiled as much as they do today since May 1859, when John Gregory discovered the “Richest Square Mile on Earth.” Within a couple of months, some 20,000 to 30,000 people had swarmed into these scenic mountains. Snow would send most of them hightailing it back to Denver.

Like most mining towns, Central City and Black Hawk, a.k.a. “City of Mills,” went through ups and downs, including Central City’s disastrous fire in 1874. When legalized gambling returned to the towns in the early 1990s, a new boom was on. It’s showing no signs of slowing down.

Despite my Baptist upbringing, I don’t frown upon gambling, but I prefer the gold in other 1859-era towns, those that found something more durable than Texas Hold ’em or progressive slots.

Take Idaho Springs. It was near the “Gem of the Mountains”—must every Colorado town have a nickname?—that Jackson made his historic discovery. Plenty of people walk the streets here, and most of them are smiling. Guidebooks to the town’s walking tour can be purchased at the Heritage Museum and Visitor Center, which tells the story of the gold rush, or at the Underhill Museum, which focuses on life here in the late 1890s. Tours are also offered at the Argo Gold Mine and Mill, and the Phoenix Mine. My favorite discoveries, however, are the whopping pancakes and French toast at the Wildfire Family Restaurant.

Even more people are walking throughout Georgetown, another 1859-era mining camp that has survived and prospered—thanks to the Georgetown Loop Historic Railroad, Hamill House, Hotel de Paris Museum and to all those quaint shops lining the picturesque, historic streets that make me glad I left the Bride and her pocketbook back home.

My favorite discovery is Breckenridge, which sprang up with the finding of gold along the Blue River in 1859.

Here’s a town that hasn’t forgotten its history, and for that we owe the Breckenridge Heritage Alliance a mighty big tip of our hats. The historic walking tour takes visitors to 28 sites, including the home of Barney and Julia Ford, now a museum. Ford, a former slave in South Carolina and Georgia, was forced off his claim at French Gulch near town—blacks couldn’t legally have claims at the time—and moved to Denver. The Fords returned to Breckenridge in 1882, making their fortune at Ford’s Restaurant and Chop House.

Other historic figures, such as “log cabin naturalist” Edwin Carter (a cross between John Muir and Psycho’s Norman Bates), get their due, and don’t forget to get a quick history lesson at the town’s Welcome Center. Other fun lessons can be found by touring the Country Boy Mine; guide Paul Hintgen promises me he hasn’t lost a tourist yet, and I only crack my head once (thank goodness for hard hats). History even can be found deep in nature, such as the ruins of a dredge boat at Maggie Pond. Thankfully, destructive dredge-boat mining ended early in WWII.

Of course, Breckenridge, at an elevation of 9,600 feet, is best known today as a ski resort. “We found our gold,” says Larissa Evans of the Breckenridge Heritage Alliance, “white gold.”

You couldn’t strap a pair of skis on me for all the gold in Colorado. Yet before I leave town, I’m hoping to find one more taste of wealth. The Breckenridge Brewery & Pub is calling my name.