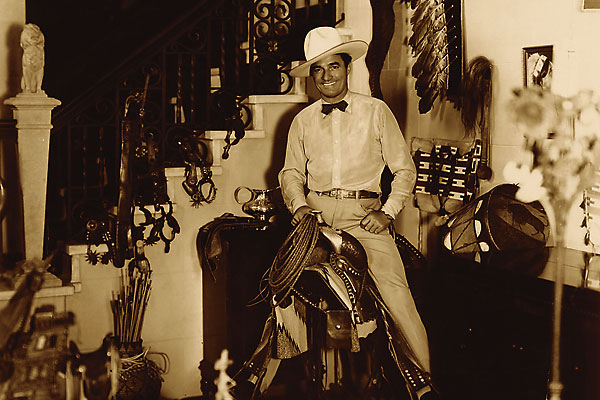 One of the most popular citizens in Beverly Hills during the 1920s was Western star Tom Mix.

Once known as “El Rodeo de las Aguas,” Gathering of the Waters, by the Spanish explorers in the mid-1700s and later for its lima bean fields in the late 19th century, Beverly Hills had  transitioned into a haven for movie, radio, recording and TV stars. Mary Pickford and Douglas Fairbanks started the trend in 1920 when they chose Beverly Hills as the home for their estate, “Pickfair.”

Tom Mix and his fellow Beverly Hills residents could be seen riding their horses around this unique community. Mix was definitely at home on his horse. He had worked as a cowboy and as a rodeo performer, and his cowboy days shaped him for the dozens of Western films in which he shared stardom with his horse Tony, executing circus-like stunt riding that showcased Mix’s equestrian talents. His home in Beverly Hills included a stable and tack room for Tony the Wonder Horse.

Before the famed cowboy movie star moved to Beverly Hills, he was just a cowboy who had bought a ranch in 1908, married for the third time and was starting to settle down. In 1910, pioneer filmmaker Col. William N. Selig used Mix’s ranch to shoot Ranch Life In the Great Southwest, a documentary about cattle being rounded up for shipment to slaughterhouses in the Midwest. Mix supervised the cowboy extras and the cattle during filming, gaining his early understanding of how films were made. After his experience with filmmaking, legend says Mix went to Mexico for a few months, fought for the revolutionary leader Francisco Madero and barely escaped being killed. Shortly thereafter, Mix began working for the Selig film company full time.

Between 1910 and 1917, Mix appeared in about 100 one- and two-reelers for Selig, sometimes writing the scenarios and directing the films, as he worked at his studio-ranch Mixville, in the Silver Lake district of north Los Angeles. By 1917, Mix signed a lucrative deal with the William Fox Corporation where he made memorable feature-length films. Instead of the “ride ’em hard, shoot-’em-up” style of earlier cowboy stars, Mix created a wholesome hero, who never drank, smoked or fought without provocation. In all, Mix starred in nearly 340 films (mainly silents, with nine talkies) between 1910 and 1935 that juxtaposed a Wild West setting with a tamer West in which technology, such as the automobile or the airplane, aided Mix in subjugating the renegades. Mix once was quoted saying that in most of  his films, he used the same basic plot: “I ride into a place owning my own horse, saddle and bridle. It wasn’t my quarrel, but I get into trouble doing the right thing for somebody else. When it’s all ironed out, I never get any money reward. I may be made foreman of the ranch, and I get the girl, but there is never a fervid love scene.”

Mix married Victoria Forde in 1918, his fourth wife and sometime co-star in some of his films while he was under contract with the Selig Company and later with the Fox Film Corporation. In 1922, they had a daughter, Thomasina, and they became an internationally-known movie star family. By 1925, Tom Mix became one of the highest-paid stars of the silent era, earning nearly $18,000 a week and was world famous.

When Mix and his family first moved to Los Angeles, they lived in the Edendale area of north Los Angeles, now considered a part of the Silver Lake and Echo Park districts. At the height of his career and through his friendship with Will Rogers, who he had first met while performing at the Miller Brothers’ 101 Ranch show in 1906, Mix decided to build a mansion in Beverly Hills for himself and his family, not too far from Rogers’ own home. By February 1924, a three-story mansion was under construction on a hill off of Benedict Canyon Drive, adjacent to the construction site of film comedian Buster Keaton’s forthcoming estate. Just up the hill on Summit Drive was already the famous Pickfair and Charles Chaplin estates.

Mix purchased this six-acre estate at 1010 Benedict Canyon Drive that would house his 19-room, three-story mansion, a pool, tennis courts, horse stables and a riding paddock. One of the attractions of moving to Beverly Hills was the equestrian culture of the town, which included bridle paths and stables at many estates north of Sunset Boulevard.

The log and branch entrance was reminiscent of a ranch gate entrance, with a TM monogram on the gate. (By 1927, this entrance was closed and a new entrance at 1010 Summit Drive was built.) The road led to the Mix’s Mediterranean-style mansion, with its stucco exterior, wrought-iron accents, tile roofs and a sweeping sloped lawn leading to a classically-styled tennis court enclosure of arches and columns. The pool area on the estate was in the classic style as well, with a pool house that featured arched windows and columns, and a decorative tiled pool adjacent to a sun deck.

The interior included nine marble baths and a 20-foot vaulted living room and dining room that could seat around 18 people. The style of the interior decoration was designed in Victoria’s taste, which included a profusion of exotic objects. Victoria’s living room was filled with gilt, satin and mahogany—reminiscent of French Baroque style. Her bedroom on the second floor was Venetian with raspberry-colored taffeta draperies, striped in gold, and a rose velvet chaise lounge, a dressing table with ormolu mounts and Venetian King- and Queen-sized beds draped with Royal crowns. Adjoining the master bedroom was a suite of dressing rooms, in the largest of whose closets Mix kept at hand 150 suits, 12 dinner jackets and an array of sombreros, fedoras, top hats and hunting caps.

Tom’s grand living room was designed in the Italian Gothic style with a vaulted ceiling that had a church-like view from the entry hall for entertaining and showing off parts of his vast collection of historical Western artifacts, which included silver-embossed saddles, rifles and guns, collections of medals and trophies, and various American Indian relics. (Most of his collection of the West was housed in his ranch near Prescott, Arizona, which was more of a museum than his home.) The living room also doubled as a screening room with a concealed screen that could be lowered into position.

Tom and Victoria Mix’s social life in Beverly Hills was busy to say the least. When Tom was in town, they maintained a schedule of parties, premieres, meetings and civic appearances. In January 1927, Tom Mix appeared at the Beverly Hills horse show, showing off his equestrian skills. In August, the Mix estate hosted a demonstration of first aid techniques by a group from the Southern California Telephone Company of Los Angeles. More than 1,500 people attended the event, which was filmed by Hollywood cameramen who donated their time. Both Tom and Victoria were extremely active in January 1930 with a 50th birthday party for Tom that included his director friends and their wives, Mr. and Mrs. Eugene Forde and Mr. and Mrs. John Ford.

Mix appeared with the Sells-Floto Circus from 1929 to 1931, often keeping him away from Beverly Hills. His absences would result in his divorce from Vickie in 1931. Mix moved out of the Beverly Hills house at first, and after the divorce, he moved back in. The Great Depression would force Mix to move from the estate altogether.

In 1932, Mix married his fifth wife, Mabel Hubbard Ward. Three years later, he signed with Mascot Pictures and gave his last screen appearance in a serial called The Miracle Rider. Mix purchased a small ranch in Sherman Oaks south of Ventura Boulevard in 1936 and lived there whenever he stayed in Los Angeles.

On October 12, 1940, 60-year-old Mix was killed while driving his 1937 Cord 812 convertible on Highway 80 near Florence, Arizona, between Tucson and Phoenix. An aluminum suitcase in the back seat flew forward and fatally struck him in the head, ending the life of the most celebrated movie cowboy in film history.

Today, the site of the Tom Mix estate is across the street from the Beverly Hills Women’s Club. The original house and grounds are mostly gone now. Modernity has triumphed, much like the West Tom Mix portrayed in his films.