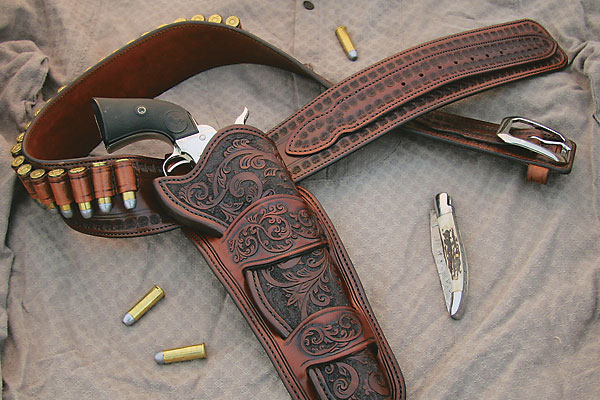 It was 1958. TV Westerns reigned as king of the small screen, with programs debuting such as The Nine Lives of Elfego Baca, Lawman and MacKenzie’s Raiders.

The credit card was introduced. The U.S. launched its first earth satellite. Alaska became our 49th state. Elvis was inducted into the Army. Jet airline service began in the U.S. And a young southern California police officer started a small, part-time business making gunleather for law enforcement personnel. Since he was left-handed, he had problems finding a holster that fit him just right, so he went into his garage to see what holster creation he could work out.

Half a century later, that former police officer has become one of the most recognizable names in the firearms industry—John Bianchi. As his 50th anniversary in the gunleather business comes to a close, we honor the man and some of his top holster making credits.

Bianchi holds more than 200 patents, trademarks and copyrights, and designed, engineered and manufactured more than 20 million holsters. He led the design team that developed the M12 Military Holster, adopted in 1984 as the standard-issue military holster for all branches of the U.S. Armed Forces. He authored the book Blue Steel and Gunleather. He consulted on small arms, tactics and equipment for police departments. He is also credited with coining the term “gunleather.”

Given his love of Western history, Bianchi assembled one of the most impressive collections of Old West firearms and memorabilia as founder and director for the now-closed Frontier Museum and Historical Center (opened in 1981). His collection has become the nucleus of the Autry National Center’s Museum of the American West.

The entire outfit will be auctioned off during Wally Beinfeld’s Antique Arms Show, held in Las Vegas, Nevada, on January 16-18, 2009. The auction will benefit the National Rifle Association Foundation’s Education Fund. Certainly a fitting tribute to John Bianchi—a living legend in the field of gunleather.