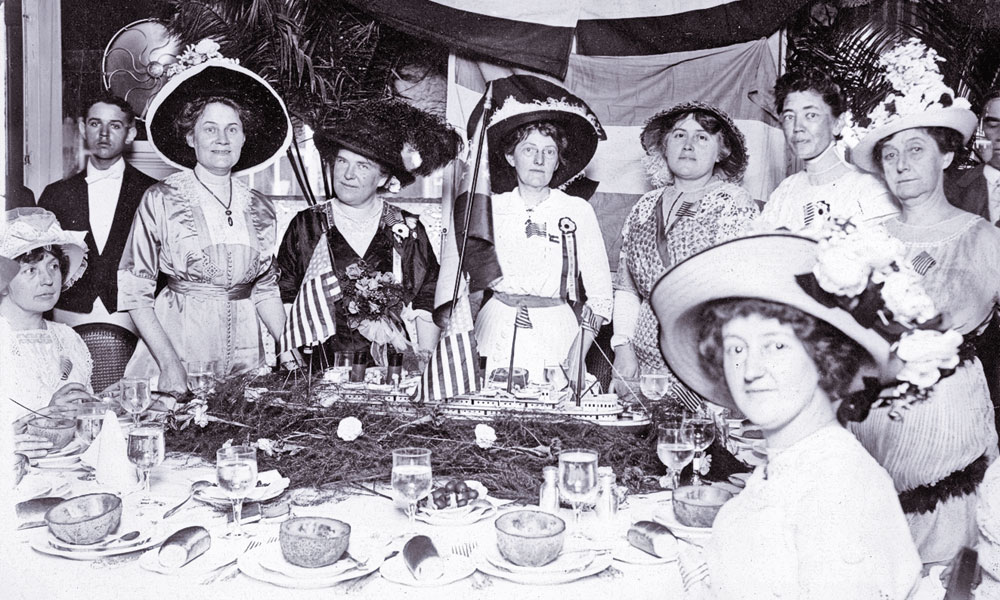 Before she became famous as the “Unsinkable Molly Brown,” after surviving the 1912 sinking of Titanic, Margaret Tobin-Brown arrived in Denver, Colorado, when elegant entertaining was at its height on Capitol Hill. In 1894, she and her husband, James, bought an extravagant home, in the fashionable neighborhood on Pennsylvania Street, purchased with his newly acquired mining money.

Within a few years, Denver’s high society accepted the Hannibal, Missouri, native into social circles. By 1897, the community showcased her among the “Urban Beauties” in the parade at the Festival of Mountain and Plain. On June 22, 1898, Margaret hosted one of the many luncheon parties held during Denver’s biennial week. The governor’s wife, Mrs. Alva Adams, was among her guests.

The following year, Margaret moved to Paris, France. When she returned to Denver after her year-long trip, at the turn of the 20th century, she became well-known for her parties. The Denver Post reported, “One always looks for beauty of arrangement and general details when Mrs. James J. Brown comes forward as a hostess….”

Denver’s high society standards reflected the Victorian times in which they lived. Expensive invitations were mailed or delivered. Parties and balls included anywhere from 50 to several hundred guests. Luncheons and dinners required written invitations, but were more intimate affairs. And parties commonly had a theme, such as the card party thrown by Mrs. Robert Levy with a Halloween theme. Golden pumpkins bloomed with golden chrysanthemums and masses of ferns. She served a “dainty” luncheon of ices, cakes and confections—all in fall colors and shapes.

“The first thing to be thought of after the menu has been decided upon,” the paper noted, “is how to make the lunch table most attractive…. Put only what is necessary on the table at any time. It is correct to leave salted almonds on the table throughout the meal and they may be eaten at any time.”

The paper went on to describe how to serve the meal: “After your guests are seated, have the maid bring the patties to each place, or if the maid is experienced, have one at each place when you sit down. After removing the patties, have a chicken croquet, with short, tender pieces of asparagus beside it, and Saratoga chips, all on one plate, brought to each guest. This leaves only the bread to be passed….”

Margaret once threw a holiday party featuring a table arranged in figure eight form with a water fountain, in a mound of ferns and palms, at the center. A Christmas tree lit up with candles and glittering with ornaments added a festive touch. About 70 guests enjoyed the dinner served on Molly’s china, which had green clovers and red berries to reflect her Irish heritage.

Cast yourself into Denver’s frontier high society and try the Saratoga chips that proved trendy during Margaret’s party-throwing days.

Slice the potatoes thin and soak in water for about an hour. Drain and completely dry, as any water will cause the grease to explode and pop. Place enough lard or oil in a Dutch oven to come halfway up the pan and heat to medium-high. Gently add the potatoes in small batches and fry until golden. Place on paper towels to absorb fat. Sprinkle with salt while still hot.

Recipe adapted from The Evening Post, Denver, Colorado, May 30, 1895