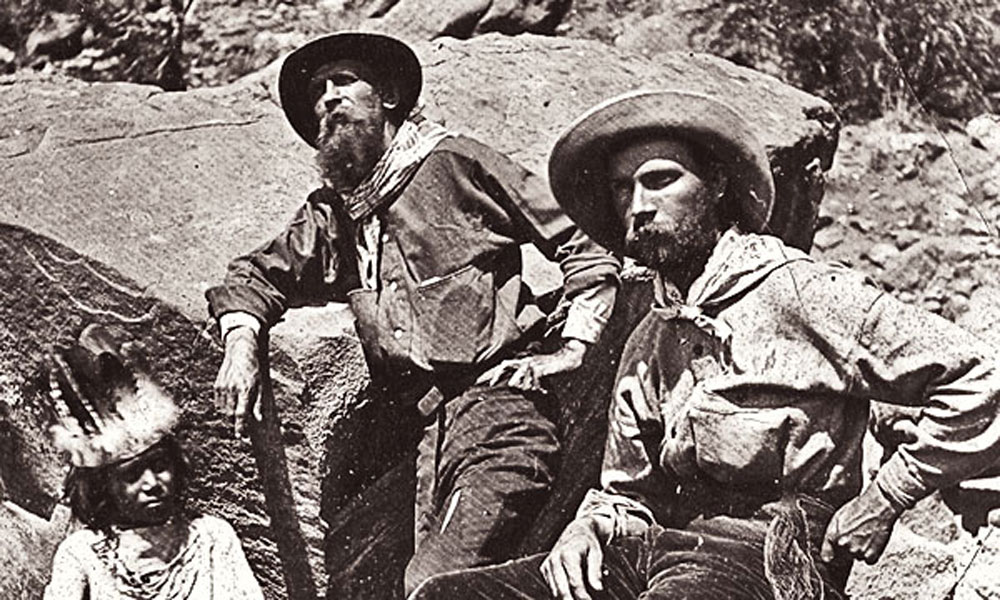 Fashion was the element that brought two Yale buddies into the circle of the U.S. Geological Survey.

James Terry Gardiner and Clarence King had made their way west to California and, on September 20, 1863, they experienced a chance encounter in Sacramento that changed the course of their lives forever.

Gardiner described their good fortune in a letter to his mother: “[The steamship] was crowded with people from the mines. Many rough, sunburned men in flannel shirts, high boots, belts, and revolvers were around me, but among them one man attracted my attention…. An old felt hat, a quick eye, a sunburned face with different lines from the other mountaineers, a long weather-beaten neck protruding from a coarse gray flannel shirt and a rough coat, a heavy revolver belt, and long legs, made up the man; and yet he is an intellectual man—I know it…I went to Clare [King], told him the case, and showed him the man. He looked at him, and, without any previous knowledge to guide him in the identification, said, from instinct, ‘That man must be Professor Brewer, leader of Professor Whitney’s geological field-party.’”

King had guessed correctly. After dinner that evening, he introduced himself and his pal to the man. The next day, Brewer introduced them to Whitney’s men. Within a week, Gardiner and King were part of the team for the California Geological Survey.

Four years later, at the age of 25, King was the leading geologist for the 40th Parallel survey. He was quite an icon of fashion, noted Henry Adams, the grandson and great-grandson of two U.S. Presidents. “In the evening, after a long, gritty day in the field, he donned silk hose, gleaming shoes, and a suit freshly pressed by his valet.” When Adams saw King in his finery by the campfire, he described him as “a bird of paradise rising in the sage-brush.”

If anyone dared to tease the geologist about his fancy clothing, they got a lecture: “It is all very well for you, who lead a civilized life nine or ten months in the year, and only get into the field for a few weeks at a time, to let yourself down to the pioneer level…. But I, who have been for years constantly in the field, would have lost my good habits altogether if I had not taken every possible opportunity to practice them.”

King was truly a scientist with style.

Made the old-fashioned way, by hand, one at a time, the custom felt hats crafted by Catalena Hatters are the best in the world for a cowboy hat connoisseur. The Catalena family can even help you restore a damaged cowboy hat that just may be too sentimental for you to discard. They are true lovers of the cowboy hat, and their pride and attention to detail show through in each hat they custom shape for their customers.

The Texas frontier troops at Fort Sam Houston must have been thrilled when the Lucchese brothers opened their boot shop in San Antonio in 1883. They made their boots affordable, yet of high quality, which holds true to this day. Their dependable boots range in style from heirloom to roper to Western, suitable for a dressy formal affair or a casual night on the town.

Folks looking for handmade Western clothing and work wear made in the good old U.S.A. need look no further. You can find classic Old West styles of coats, vests, jackets, dusters, shirts and pants to your heart’s content. These vintage looks are the go-to preference for movie stars to ranch hands.