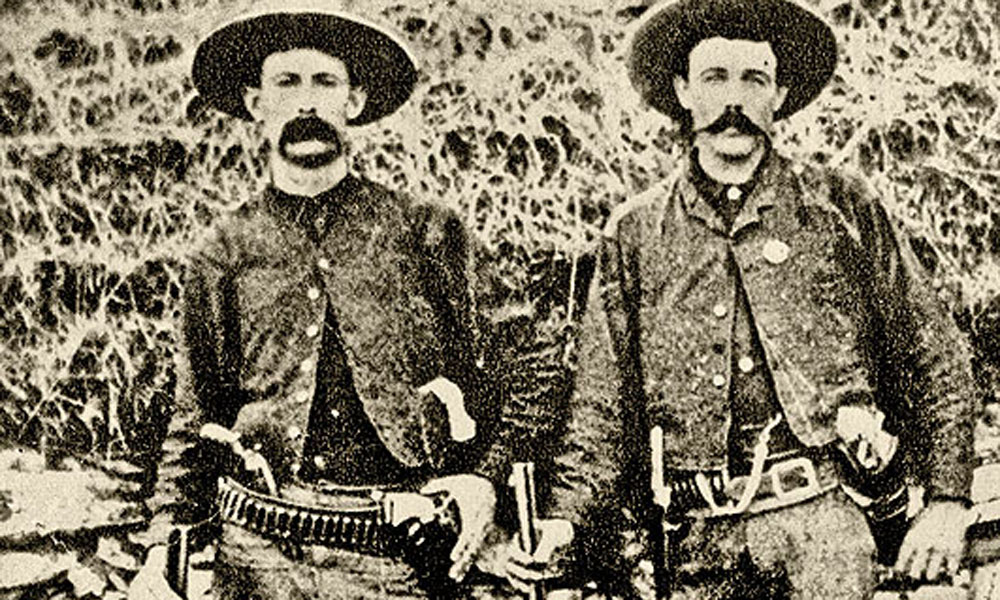 The British affinity for double-action (DA) revolvers led to a number of imports into the American West over the years, like the popular Bulldog revolver. By the mid-1870s, these rapid-shooting sidearms gained enough favor that in 1877, Colt finally brought out its first DA revolver. When the ’77 was initially produced, Colt dubbed it a “New Double Action, Self Cocking, Central Fire, Six Shot Revolver.” Noting that the six-gun’s DA capabilities allowed for quite rapid firing, Colt’s major distributor, B. Kittredge of Cincinnati, Ohio, coined the monikers of  “Lightning” for the .38 caliber, and “Thunderer” for the .41 bore, but ironically it is the Lightning name that stuck. Around 200 were produced in .32 Colt caliber (called “Rainmaker”), but these are extremely rare
today. It is the .41 Long Colt-chambered Thunderer that we’ll focus on here.

Built around scaled-down lines of its 1873 Single Action Army revolver, but with a bird’s-head grip, larger trigger guard, and in DA, this self-cocker, regardless of caliber, the Thunderer was plagued with problems that resulted in all too frequent breaking of its intricately shaped, highly flexed internal springs, and an action that was often out of sync. Despite these weaknesses, 166,849 were turned out between 1877 and 1909, largely due to its fast action and smooth handling—qualities that endeared it to many, especially in the West!

The .41 Long Colt Thunderer is probably best remembered as the oft-used six-gun of  outlaw William Bonney, aka  Billy The Kid, as witnessed by Westerner Frank Collinson, in 1878, when he ran across the young gunman. Collinson recalled that the Kid was not much to look at, and was shabbily dressed, but had his “…ever-ready Colt double-action .41 pistol around him and in easy reach….” The ’77 Thunderer was also packed by outlaw Cole Younger and infamous Texas shootist John Wesley Hardin, as well as lawman Pat Garrett, who was presented with a silver-handled .41 Colt while serving as a customs collector in 1903.

These hard cases preferred the .41 Long Colt as their pocket revolvers for good reasons. Barrel lengths ran from 1½  to 10 inches, with the norm running at 2½ to 3½  inches without an ejector and 4½  to 6 inches with an ejector. Lightweight (the 6-inch barrel with ejector weighed 27 ounces), most were easy to conceal under a coat. The .41 Long Colt cartridge, introduced with the 1877, became a relatively powerful and popular round in the late 19th century, even with the availability of some larger revolvers like Colt’s ’73 Single Action. The factory load boasted a 200-grain lead bullet backed by around 20 to 21 grains of black powder that produced a muzzle velocity of 730 feet per second (fps) and about 235 foot pounds of energy. This packed slightly more punch than the Lightning’s .38 Long Colt, 150-grain lead projectile, moving at 770 fps, with 195 foot pounds of muzzle energy, and was comparable to a modern .38 Special with a 200-grain lead bullet.

Although  Colt’s 1877 DA revolver has the dubious honor of having the worst double-action system ever devised, in new condition, the Thunderer was considered an efficient six-gun. However, when actually used much, inherent weaknesses showed in its design. Based on its longevity and production figures, the gun-buying public of the late 19th century was willing to overlook its faults—probably because most handguns were simply carried more than they were actually fired. The ’77 Colt in .41 caliber could be considered the .38 Special of its day, and in the relatively compact size of the Thunderer, it made for one helluva six-shooter—one of the classics of the Wild West!

Phil Spangenberger has written for Guns & Ammo, appears on the History Channel and other networks, produces Wild West shows, is a Hollywood gun coach and character actor, and is True West’s Firearms Editor.

For 40 years, A&A Engraving has been America’s trusted choice for fine commemorative firearms. The company offers complete custom design services, resulting in heirloom quality showpieces that honor the unique communities, businesses, organizations and individuals who have built, protected and continue to serve the United States of America.

Taylor’s & Co.’s exclusive second-generation, stagecoach-style, single-action revolver, The Smoke Wagon, has a blue finish with a case-hardened frame, and a thin, richly detailed, checkered grip for comfort and improved aim. The Smoke Wagon is an exclusive, trademarked sidearm of the Winchester, Virginia, firearm company. The deluxe Smoke Wagon includes custom tuning, a custom hammer and base pin springs, a trigger pull set at three pounds, jig-cut, positive angles on all triggers and sears for crisp, reliable action, and a wire bolt spring.

Known worldwide as “the rifle that won the West,” the Winchester 1873 Rifle and Carbine is manufactured by Uberti in seven distinctive models, including an Uberti 1873 Carbine, Uberti 1873 Special Sporting Rifle, Uberti 1873 Trapper and Uberti 1873 Half Octagon Rifle.

Modeled after an original in the Cimarron Firearms private collection, the five-shot smoothbore 1887 Lever Action Terminator repeating shotgun first went on sale in the spring of 1888. The shotgun quickly became a favorite of law-enforcement officers across the West. Today’s, Cimarron 1887 Lever Action Terminator is available in either a 22-, or 28-inch round blued barrel,
a color case hardened receiver, in 12 gauge and capable of handling 2¾-inch shotshells.

The Shiloh Sharps 1874 Long Range Express is one of nine models of 1874 Shiloh Sharps rifles offered by the company. Every model can be customized individually, in numerous calibers, four grades of wood, multiple wood finishes, barrel length, weight and features—every minor detail and accessory a gun owner could want or imagine.

To celebrate its first century of excellence, the Buffalo Bill Center of the West is proud to partner with Navy Arms and Winchester Firearms to re-create the famed Winchester “Centennial Model” 1873 lever-action rifle. Working with Winchester, Navy Arms—the company that launched the replica-firearms industry—worked with original maker Winchester for the production of just 200 exhibition models and 1,000 presentation models. One hundred percent of the profits from the sale of these two models will go to the mission of the Buffalo Bill Center of the West and the Cody Firearms Museum.