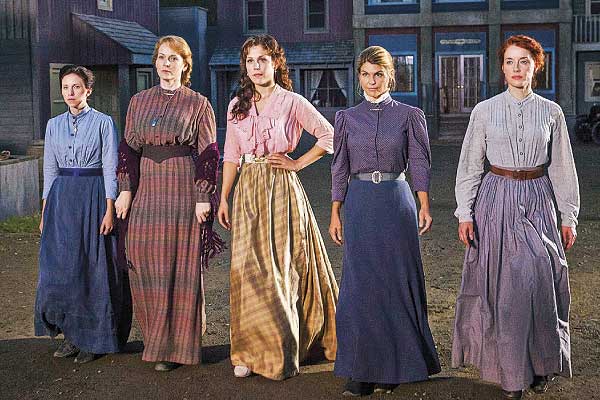 The mind of a television executive can be a confusing, dangerous maze of brilliance and misconception. Last year, A&E cancelled Longmire because the cabler felt the audience for its hit show wasn’t the “right audience.” In other words, too old.

While I wrote this article, Netflix announced Longmire’s new home, and new season, giving it the same muscle as the on-demand Internet streamer’s House of Cards and Orange is the New Black.

Despite a spike in production, with a new History Channel miniseries (on the Texas Rangers) and HBO’s expensive retooling of Westworld ready for broadcast, the TV Western has been in a delicate place the last 30 years, always having to reprove its popularity. Hell on Wheels, Deadwood, Justified, Broken Trail, Hatfields & McCoys and others are often viewed by executives as aberrations, forgetting the audience share and the Emmys.

If you want to see a network vice president dive under his desk, just mention “Western Romance.”

The irony is that Western Romance novels are consistent and impressive sellers. Usually written by excellent women authors, these books enjoy an enormous, and loyal, fan base, but often don’t get the recognition of their gunfighter paperback cousins.

So, executives ask, “Who would watch that on TV?”

Countering that thinking, The Notebook author Nicholas Sparks’s maiden TV effort was producing Deliverance Creek for Lifetime, which debuted last September. Starring Lauren Ambrose as a widow in the post-Civil War South, Deliverance Creek was well made, but the show never found its target audience of Western Romance readers, so no series was ordered.

Western Writers of America President Sherry Monahan summed up the problem: “It’s tough being a female Western author in today’s market, and it seems our books are sub-genres of other genres. Our books appear in the history, cooking, biography, regional history and romance sections. While most books, including my nonfiction ones, sell okay, the Western Romance books are breaking sales records.

“Yet these books are not seen as Westerns. They’re considered Romances that just happen to be set in the historical or contemporary American West.”

The theory with current television is that lightning must strike immediately to make a show worthwhile to produce. The current crop of Westerns hit it big with their pilots, with Justified racking up an enormous rating from the start. But just as the Western Romance’s genuine success on the bookracks has been quiet and steady, so has it been on television.

The Hallmark Channel has long been the home of TV Westerns, usually shot quickly and marketed as family fare. Yet Hallmark departed from its stalwart hero formula with the production of Canadian author Janette Oke’s Love Comes Softly, in 2003, starring Katherine Heigl.

The faith-based book, published in 1979, was a success that Oke followed with seven book sequels and 10 TV movie sequels and prequels.  She also launched five other book series, and her work most recently inspired a TV series for Hallmark, When Calls the Heart, which will start its second season this May.

Oke’s books, mixing romance and spiritual inspiration, have a devoted following that reaches beyond the author’s book sales to that audience desiring something other than a shoot-’em-up, and the films have been produced with that in mind—fine photography and name casts are the norm.

Would I choose a Western Romance over 1967’s Hombre or 1992’s Unforgiven? No, but I am not the target audience. Yet I would be foolish to ignore that the genre’s incredible following has created a viable offshoot of the TV Action-Western—and helps keep the Western alive.

The strong women of these films know how to handle a gun, and a man, conjuring the ghosts of Barbara Stanwyck and Gail Russell, and bringing strength to the sometimes sanitized stories.

Western Romances may not be the usual viewing for male fans of Westerns. But if we follow another trail by tuning in, or even reading a different kind of Western novel, we might be surprised at the interesting work we discover along the way.