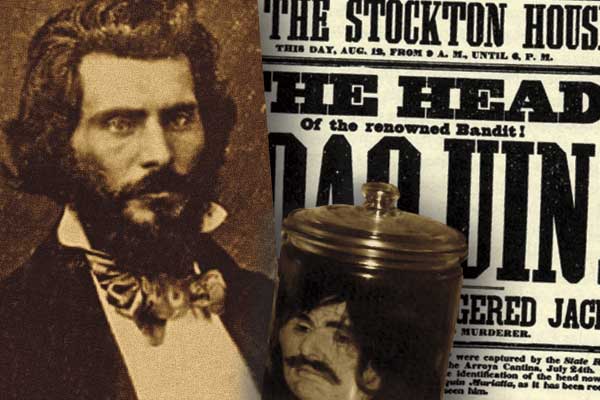 By daybreak, they reach the spot where the creek enters the San Joaquin Valley. The Rangers spot the smoke of a campfire on the plains three miles in the distance.

Spurring their mounts, the Rangers approach within 400 yards. The camp comes alive as Love and his men gallop in and demand, at gunpoint, that the Mexicans stop in their tracks.

Ranger Bill Byrnes recognizes the bandit leader immediately: “This is Joaquin, boys! We have got him at last!”

At this unexpected pronouncement, the assembled gang members fling open their serapes, whip out their pistols and blaze away.

A three-fingered desperado fires two shots at Love, parting the ranger’s hair. Nine shots from the Rangers rip into the shooter, and he crumples to the ground.

Harry Love exhibited Murrieta’s head for $1 a view (see poster) in the central California mining camps where Murrieta was well known. Dr. Louis Jordan’s San Francisco museum acquired the “trophy.” It spent 30 years in the museum before being destroyed in the 1906 earthquake and fire.

With his reward money, Love bought a large tract of land near Santa Cruz and married neighbor Mary Bennett in 1854. But they had a rough marriage, and she left him in 1866. In debt, Love confronted Bennett on June 29, 1868,  and was shot by a handyman working for her. Love died of complications from the wound and a botched operation.

From the beginning, some refused to believe Murrieta had been killed. In the 1950s and ’60s, this refrain gained credence when several authors maintained Murrieta never existed and that Ranger Love faked the episode; they claimed he used some poor Indian’s cabeza as a float-in. Yet research by authors William Secrest and John Boessenecker has convincingly proven otherwise; too many eyewitnesses who knew Murrieta in the mining camps had also testified the head of the infamous bandido was, in fact, in the jar.