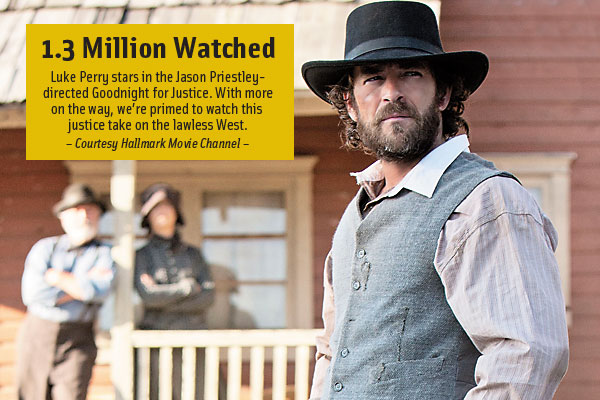 Luke Perry has become a major star in a series of TV Westerns that feature Perry as John Goodnight, a 19th-century circuit judge.

The first, Goodnight for Justice, was the highest rated made-for-television movie in Hallmark’s history. Two more movies are due, with one premiering on January 28. In talking with Perry, we found out about his passion for Clint Eastwood’s The Outlaw Josey Wales.

“I’ll tell you flat out,” he says, “there’s two movies that have influenced me the most—so much that it’s nearly sickened me—and that’s The Man Who Shot Liberty Valance and The Outlaw Josey Wales. I cannot stop watching these movies.

“This is the first time that Clint Eastwood, as an actor and director, really hit his full stride. I mean running it at top spin. The depth of that performance—and not just Chief Dan George, which he has a lock on with this performance, but all his traditional players, Bill McKinney, everybody.

“That was the one that made me think I need to do something—it was Josey that prompted the idea of my creating this circuit judge character. For the first time, I put pen to paper and wrote the outline for the circuit judge, John Goodnight.

“Man, Clint, that’s when you crossed over from being good to being great.

“I can talk about Unforgiven. I’ve seen it many times. Gene Hackman’s work in it, you know, incredible, but The Outlaw Josey Wales is one of the great movies of all time. Forget about genres and Westerns. Think about what it’s about, and how he tells the story, how complete it is. It served to illustrate, for me, how a movie can be bigger than a genre, bigger than a Western, so much more than cowboys. It was art.”