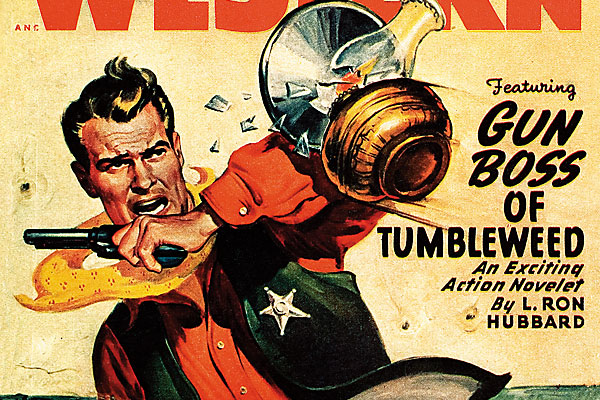 From the time of his birth in windswept Tilden, Nebraska, on March 11, 1911, L. Ron Hubbard wandered through a West criss-crossed by his parents, naval officer Harry Hubbard and his mother, the former Ledora Waterbury.

The bottom-of-the-barrel peace-time pay brought the little family to Grandfather Waterbury’s ranch in Kalispell, Montana. Homesteading the place, which was only a quarter section, Waterbury added to his beef sales as the small cattle town’s sole veterinarian.

Here, the family toughed out the droughts, gully washers and skin-and-bone economy of the time. Long before he was able to attend the local school,
L. Ron was on horseback, riding some of the ranch’s more sedate cow ponies.

In the Depression years, L. Ron found himself back on that Western trail, as he settled himself at a small beachfront town in California to tackle the pulps. Originally strewn across newsstands in a riot of color, the wood pulp paper publications went for 10¢ or 20¢ a copy. The new kid on the block, he tussled with galley slaves such as MacKinlay Kantor, a latter-day Pulitzer winner, Frederick C. Painton, Lester Dent of Doc Savage fame and Max Brand, the king of a thousand Westerns, as well as Doctor Kildare.

At first, he did not make any Western sales, but sold stories dealing with cutthroat Pearl Pirates and Satanic Voodoo. When his hair-raising story, “The Green God,” hit Thrilling Adventures in 1934, agents came knocking on Hubbard’s bungalow door. He started publishing an average of more than one story every two weeks—a fiction factory no less. With more than 138 novels, novelettes and short stories in a six-year period covering a wide chunk of exotic adventure and whodunnits, his favorite yarns were still his Westerns.

Most folks who have heard of L. Ron Hubbard associate him with the religion he founded, Scientology. Yet any reader of pulps like Western Yarns, Western Aces, Western Action and The Rio Kid Western knew of a Hubbard who pounded his Remington typewriter, throwing a wide loop over the land of his beginnings.

In January 2011, Cattle King for a Day became the fifth Hubbard Western released in the “Stories from the Golden Age” classic pulp reprints. Since then, all 15 of his Westerns have been republished, as both books and audiotapes, with some, like Under the Diehard Brand, making the stage at the Golden Age Theater in Hollywood, California. Besides featuring enjoyable reads of bamboozled cowhands and quick-thinking gunfighters, these reprints share the original pulp artwork and illustrations.

The “Golden Age” of Westerns comes to life again, just looking at some of the sensational cover art that branded a Hubbard Western, back in the day.

William Garwood is a book reviewer for True West Magazine and the author of the novel, West Wandering Wind, currently out on Kindle and Nook.