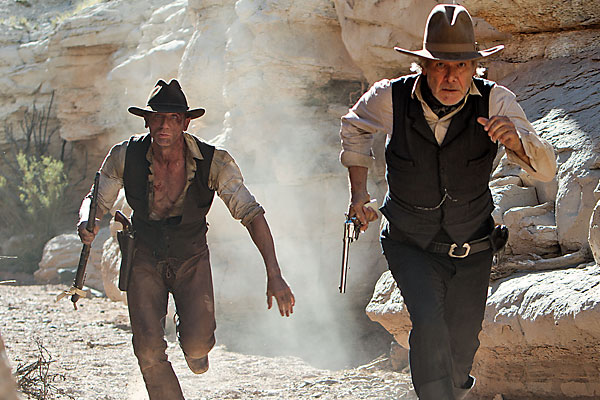 The 2011 summer blockbuster film turned out to be one of the biggest disappointments, if you listen to Hollywood.

With the brain trusts of Steven Spielberg, Ron Howard and Brian Grazer, mega stars Daniel Craig and Harrison Ford, and a budget of $163 million, the movie seemed like it was “Too Big to Fail.” But when the movie only narrowly beat out Smurfs on opening weekend, a frustrated Harrison Ford ripped off the head of a smurf doll on the late-night TV talk show with Conan O’Brien.

When we polled our readers for the best Western to come out of 2011, Cowboys & Aliens won hands down—chosen not only for best picture, but also for best director, best actor and best screenwriter.

When Christmas came around, the C&A DVD was a hot gift on Amazon, easily among the 100 best-selling DVDs and mainly hovering above the top 25. Among Western movie releases, it was number one across the board.

“Cowboys & Aliens wasn’t good enough. Forget all the smart people involved in it; it wasn’t good enough. All those little creatures bouncing around were crappy….Certainly you couldn’t have more talented people involved in Cowboys & Aliens, but it took, you know, 10 smart and talented people to come up with a mediocre movie. It just happens.”
— Universal Studios President Ronald Meyer

Cowboys & Aliens was not a box office success because it mixed two genres that are beloved by relatively small demographics, the members of which are very prickly about what constitutes good Science Fiction or a good Western. So you’ve offended most of the market for the movie before the film is even released.

The rest of the potential audience just snorted at the very idea. Plus: terrible title, like Snakes on a Plane. The title seemed to give the whole movie away. Worse yet, it promised a comedy and delivered a very odd drama.
—Mary Doria Russell
Author of Doc

The Day the Earth Stood Still is a great Science Fiction movie. The Searchers is a great Western. But John Wayne and Patricia Neal didn’t work in either of the two movies they starred together in.
—Johnny D. Boggs
Spur-winning novelist

Many of my friends involved in Western history wished Favreau had made Cowboys & Aliens as a straight Western. At the beginning, it was beautiful, gritty, flawless, a good window into the late 1800s in the Southwest. I readily admit I enjoyed the whole thing, but maybe this concept was too much of a jar to the public.
—Rex Rideout
Music historian who played the fiddler in Cowboys & Aliens

I think they tried to hit two target audiences and missed both. The youth audience, the one that thinks Shia LaBeouf is aging and Cameron Diaz is “nice looking for an older woman,” did not latch onto Harrison Ford and Daniel Craig, who are older than that audience’s grandparents, as heroes. And the mature “Western” audience, the one that faithfully goes to see any new Western, did not embrace the set-up of an alien invasion in the Old West. Costuming and tack were inaccurate for them. That all being said, I enjoyed it for what it was…it was fun and different.
—Juni Fisher
Western Music Association’s Entertainer of the Year

I personally enjoyed Cowboys & Aliens very much. I took it for what it was, not a traditional-type Western, but a new way of looking at adventure, humor and escape movies. My only complaint was they killed off Buck Taylor in the first few frames.
—Jim Dunham
Booth Western Art Museum’s director of special projects

It was a tricky movie to market, as nothing like this had been done, and it fell in between the gap of the true Western and  Comedy—Blazing Saddles meets Unforgiven. I personally loved the movie and found many of my collectors voicing the same.
—Mark Sublette
Owner of Medicine Man Gallery

Why did Cowboys & Aliens make over $100 million at the box office and is yet called a failure? Obviously people who liked it gave it good word of mouth, or it wouldn’t have made that much money. It would seem that it was mostly called a failure by people who didn’t see it.
—Allen Barra
Sports journalist for The Wall Street Journal and author of Inventing Wyatt Earp