On the Bison Trail 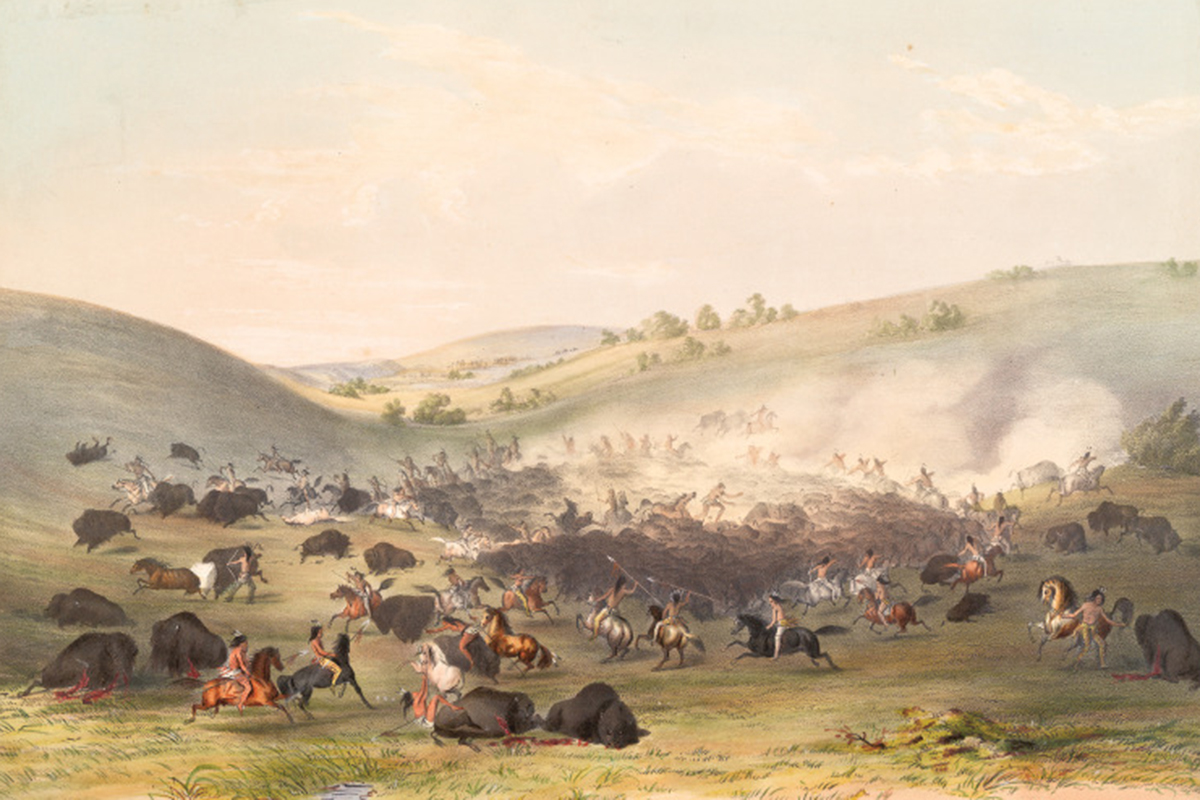 The great wild bison herds that once ranged from Canada to Texas had a significant impact on the people and landscape of the West. Their annual migrations churned the soil as they took advantage of natural grasslands. The native people of the region followed these herds as a source of food. They utilized every part of the animals, often referred to as buffalos, by processing hides for lodges, clothing and moccasins. They turned bison bones into tools and used the animals’ sinew to make thread or binding for attaching tips to arrows to use in hunting or for protection.

When the Northern Boundary Survey worked its way from the Great Lakes to the Rocky Mountains from 1872 to 1874, bison were often encountered. In his report of February 14, 1877, Maj. William Twining, who led the survey team, wrote of the area known as Three Buttes or the Sweet Grass Hills of present Montana, saying they “are the center of the feeding-ground of the great northern herd of buffaloes.” He added, “This herd, which ranges from the Missouri River north to the Saskatchewan, made its appearance, going south, about the last of August. The number of animals is beyond all estimation. Looking at the front of the herd from an elevation of 1,800 feet above the plains, I was unable to see the end in either direction.”

Traveling on the fringes of the immense herd were “Sioux, Assiniboines, Gros Ventres of the prairie, and Blackfeet,” Twining wrote.

Valentine T. McGillycuddy, who worked on the Northern Boundary Survey, later recalled, “Buffalo dotted the plains as far as the eye could see. Often we had to suspend astronomical observations at our stations located at 20-mile intervals because the vibrations from the drumming hoofs of herds nearby shook the instruments.”

Fort Benton, Montana, sat in the heart of the northern range of the great bison herds and was an important trading location in the Upper Missouri River country. This site, with its preserved original walls and recreated trading rooms, is a good place to start a journey on the trail of the bison. At the Museum of the Northern Great Plains, see the Hornaday Smithsonian buffalo exhibit, which is a group of six animals, from an impressive bull to a small calf. William T. Hornaday collected the animals in 1886 for the National Museum in Washington, D.C. They came from the last wild herd found between the Yellowstone and Missouri rivers. These six mounts were placed on exhibition in 1887 at the Smithsonian, where the big bull became a model for several lasting symbols, including the seal for the Department of the Interior and the badge for the National Park Service. This grouping of bison was returned to Montana in 1955 and placed in storage until the animal mounts were restored and placed on display in Fort Benton.

Nearly 30 years ago, college professors Frank and Deborah Popper proposed Buffalo Commons—a measure that would have the government buying large tracks of land across the Great Plains as a way to restore the prairie animals to their natural habitat. Their premise was based partly on the fact that the population of the area was already sparse and declining. They imagined a return to a landscape where bison and other animals could freely roam as they had done more than a century earlier.

Their proposal drew a firestorm of criticism and many said it would never happen. But in the intervening decades there have been changes in land management in the region. One of them is the establishment of the American Prairie Reserve, based in Montana, which has been buying ranch land from willing sellers and putting together a land mass that will support large numbers of bison and provide habitat for other species as well.

Yellowstone and the Black Hills

The bison in the Hornaday exhibit at Fort Benton came from the wild herd in Yellowstone National Park back in the 1870s, and that herd is still intact. Traveling through the Hayden Valley in the central part of Yellowstone, you will almost always see small and large groups of bison. If your timing is just right, you might see them fording the Yellowstone River.

The Lamar Valley in the northern area of the park—between the Tower-Roosevelt Junction and Cooke City, Montana—is another excellent place to see wild bison herds, and here you have the added opportunity to watch interaction between the bison and the Yellowstone wolf packs, who were reintroduced in this area of the park in 1995 and have significantly increased their range since then.

To experience a buffalo roundup, travel to Custer State Park, near Keystone, South Dakota, in late September when an annual gathering takes place. You can see the buffalo in this herd throughout the park at other times of the year.

When bison populated the Great Plains in the 18th and 19th centuries, they roamed from the Dakotas to Texas. You can cross the landscape they utilized as you travel to Dodge City, Kansas. This town grew to prominence in large part because of frontier trade, a good portion of it tied to the buffalo hunters who harvested thousands of animals primarily for their hides.

Those who hunted on the bison ranges in Texas built their own commercial center at Fort Griffin. Learn about that story at Fort Griffin State Park, near Albany, Texas. Men like the Mooar Brothers and others followed the herds, often shooting dozens or a hundred in a single killing opportunity. These massive animals, who had faced varied climates, the need for annual migrations of hundreds of miles, and subsistence-hunting by Indians for generations, could not avoid the bullets fired from a Sharps Big Fifty. By the late 1800s, the great herds had been nearly decimated.

A few wild bison, captured and raised by cattleman Charlie Goodnight and others in Yellowstone National Park, survived and in the ensuing decades repopulated. There are many bison herds now grazing on land from Texas to Canada. They are domestic bison privately owned, raised and managed by ranchers who still rely on the native grasses of the Great Plains to nurture the animals.