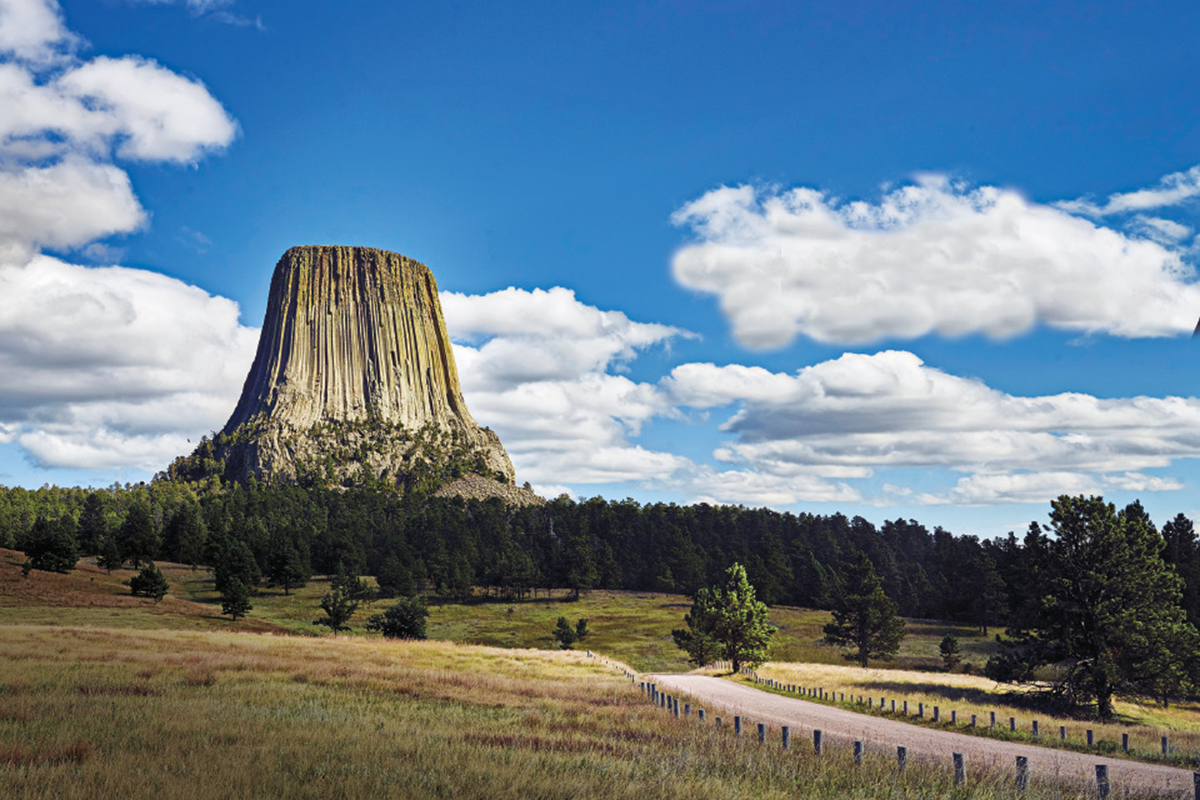 The great Western American road trip is  a bucket list item for travelers all over the world. During this worldwide COVID-19 pandemic, we know that travel is limited at best and nonexistent at worst. Although the nation awaits the lifting of travel restrictions and the slow reopening of each state—including parks, historic attractions, museums, hotels, restaurants and bars—True West’s editorial team offers four distinct scenic, heritage trips across the Western United States to inspire your future travel. We hope to capture your imagination and encourage you to plan a road trip to discover the Old West in a way you’ve never experienced before.

The Butch and Sundance Trail

Travelers who love the Old West will enjoy the Butch and Sundance Trail in Laramie, home of the University of Wyoming, the American Heritage Center, Laramie Plains Museum and the Wyoming Territorial Prison State Historic Site.

From Laramie, start the tour in the capital city of Cheyenne.

Time: Five to seven days; if you have two weeks or a month to see more of Wyoming, do it!

Fort Laramie National Historic Site: A significant fort in Western U.S. history, Fort Laramie was founded in 1834 and was a strategic post during the Plains Indian Wars. Visitors who take the self-guided or guided tour will learn the importance of Fort Laramie to U.S. history until it closed in 1890.

Casper: Old West history buffs should not miss a tour of Fort Caspar Museum, an 1865 frontier outpost on the North Platte River, completely rebuilt by the WPA in the 1930s.

Kaycee: The historic ranching town is home to the Johnson County Cattle War’s TA Ranch and gateway to Hole-in-the-Wall, the rugged hideout of Butch Cassidy’s the Wild Bunch gang. Don’t miss the Chris LeDoux monument; Kaycee was his hometown.

Buffalo: At this gateway to the Big Horn Mountains, stay at the famous Occidental Hotel, tour the Jim Gatchell Memorial Museum and, if possible, make plans to attend Longmire Days, scheduled for August 13-16, 2020.

Sheridan: The historic Sheridan Inn is the perfect place to stay while exploring key sites of the Great Sioux War, including the Battle of Rosebud and Battle of Little Bighorn, north across the border in Montana. In town, visit the Mint Bar, King’s Ropes and in nearby Bighorn, the award-winning Brinton Museum.

Gillette: When visiting the county seat of Campbell County and a coal-mining center of the West, a tour of the county’s Rockpile Museum should not be missed.

Sundance: Here’s where Harry Alonzo Longabaugh, aka the “Sundance Kid,” earned his nickname after a stint in the local jail. Enjoy the historic town, the Crook County Museum and a tour of Devil’s Tower National Monument, just 30 miles away.

The Pony Express, which only lasted from April 1860 until October 1861, became part of Western lore almost immediately after its inception and remains one of the more popular eras (short-lived as it was) in Western frontier history. A great way to experience the heritage of the horse-delivered mail route is to travel the Pony Express National Historic Trail, starting at its home station in St. Joseph, Missouri, and tracing it across northern Missouri and Nebraska to Scottsbluff and Gering, Nebraska. The more time you have the better to enjoy the scenic drive on local, state and U.S. highways rather than on the interstates. Travelers who have more time can consider following the historic trail route all the way across Wyoming, Utah, Nevada and California to its final station in San Francisco.

Time: Five to seven days, but if you have a month, follow the trail all the way to California and take as many U.S. and state highways as possible.

St. Joseph: Known best as the trailhead for the Pony Express, St. Joseph boasts an historic district that will inspire the imagination and remind visitors of the importance of Missouri’s western frontier towns to American history. Start a tour at the Pony Express Museum, then take the time to visit the St. Joseph Museum, Patee House Museum, Jesse James Home, Robidoux Row Museum and Pony Express Monument. Book a room at the Whiskey Mansion Inn and stay for a long weekend.

Rock Creek Station State Historical Park: Just southeast of Fairbury, the Rock Creek Pony Express Station was the site of James Butler “Wild Bill” Hickok’s infamous shootout with David McCanles. The park also preserves wagon ruts from the thousands of wagons that traveled the Oregon Trail back and forth across the country.

Kearney: Follow U.S. 30 along the Platte River across the Cornhusker State to the former frontier outpost and book a room at one of the national chain hotels in town. Spend time at Fort Kearny State Historical Park built along the route of the Oregon Trail and Pony Express, The Archway Museum, Trails and Rails Museum and the G.W. Frank Museum of History and Culture.

Gothenburg: Founded by Swedish immigrants, Gothenburg is home to the Pony Express Station Museum in the town’s Ehmen Park.

North Platte: A Pony Express and Oregon Trail town, North Platte’s Buffalo Bill Ranch State Historical Park was the showman’s headquarters and showplace ranch. After a tour of the ranch, spend some time at the Golden Spike Tower and Visitor Center overlooking the Union Pacific’s Bailey Yard, the largest railroad facility in the world.

In 1858, two years before the opening of the northern route of the Pony Express, the first national overland mail service was established on a Southern route from St. Louis and Memphis to San Francisco. Soon known as the Butterfield Overland Mail Route, a major juncture of the two northern trunk lines met in Fort Smith, Arkansas, before the stages ventured across the border into the Indian Territory and the wilds of frontier Texas. In 1858, the Comanches still ruled much of the Southern Plains and the stagecoach-mail service’s long ramble across the Lone Star State was protected by small companies of Texas Rangers and a series of Army infantry and mounted dragoon companies stationed in a long arc to El Paso. Today, the intrepid heritage traveler can enjoy a long, slow ride from Arkansas, across southeastern Oklahoma and Texas to El Paso, with numerous historic sites, parks and restored frontier forts to tarry at along the way. And, of course, they’ll enjoy lots of good regional Texas BBQ and Mexican food on the route.

Fort Smith: Book a room at the 1817 historic inn in the Fort Smith Belle Grove Historic District, and spend a few days exploring one of the oldest American cities west of the Mississippi. Don’t miss the Bass Reeves statue, dedicated to the famous black deputy U.S. marshal, and spend a day or two touring the Fort Smith National Historic Site, including the barracks and Judge Isaac Parker’s famous courtroom. A new attraction should open in the city in the fall: The U.S. Marshal Museum.

Fort Washita: Built in 1842 as the southernmost American outpost before Texas was a state, the fort near Colbert’s Ferry protected travelers along the national trail and mail route. Today the Chickasaw Nation maintains the historic site.

Sherman: The east Texas outpost was 205 miles from Fort Smith and a welcome sight for weary travelers. Take time to visit the Sherman Museum and the Texas Historical Marker near the site of the original stage station.

Fort Belknap: Built in 1851, and rebuilt near its original foundations in the 1930s, the fort is maintained as a museum near Newcastle. The isolated army base was home to the 2nd Cavalry when the stage line was in operation between 1858 and 1861.

Fort Chadbourne: The Army opened the post in 1852 to protect travelers and citizens living on the Texas frontier and it operated as a station for the Butterfield Overland Mail Company. Today, the fort is a Texas State Historical Site, with a visitor center, museum and six restored buildings.

Fort Stockton: Established in the spring of 1859 adjacent to Comanche Springs, Fort Stockton became a key post on the southern plains of West Texas. Modern Fort Stockton is a great spot to stay for a long weekend and immerse in the local history. Schedule time to tour Historic Fort Stockton, the Annie Riggs Memorial Museum and the Mesa Vineyard & Tasting Room.

Fort Davis: Fort Davis National Historic Site is the best-preserved Texas frontier fort in the Lone Star State and offers living history events throughout the year. Stay at the Hotel Limpia and explore the area, including the towns of Pecos and Fort Stockton.

Oklahoma is a state with a rich but complex history. Congress founded it as the Indian Territory as the resettlement home for Eastern and Southern tribes. After the Civil War the federal government continued to resettle Western tribes from all regions to the Southern Plains territory. Later, in 1890, the Oklahoma Territory was created and in 1907 Oklahoma became the 46th state. Today, the Sooner State has one of the largest American Indian populations in the country. For travelers interested in learning firsthand about Native tribes that call Oklahoma home today, the state has a series of excellent museums and Indian heritage centers to visit to learn about the First Nations. With the current pandemic all of the following facilities were closed at press time, so please contact each organization before making plans to visit.

Time: Three to seven days; Oklahoma’s American Indian heritage can be explored in a series of trips to the state’s top cities, museums and Indian Heritage Centers.

Oklahoma City: The state capital is home to the National Cowboy & Western Heritage Museum, Oklahoma History Center and Oklahoma Hall of Fame. The state’s economic, cultural and political hub is a great place to start a week-long tour of the Sooner State.

Tulsa: Located in the state’s second largest city, the Gilcrease Museum has one of the finest American Indian history and Western art collections in the nation. Schedule at least a long weekend to explore Tulsa.

Best Website: TravelOk.com has a full guide to American Indian attractions in the state.