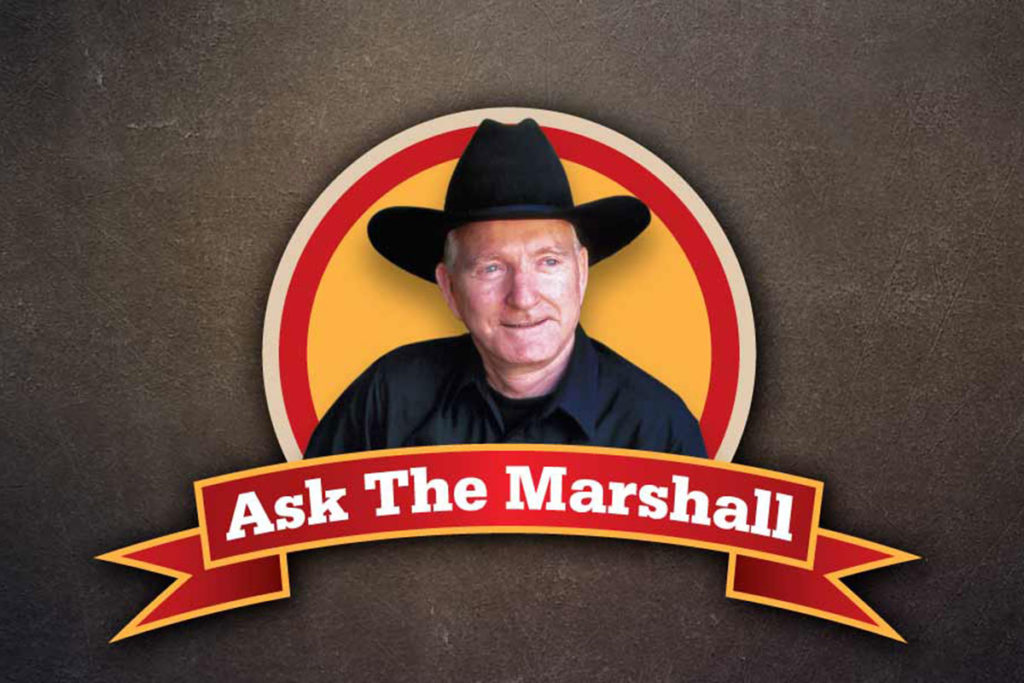 Was Tom Mix ever a real lawman?

Tom Mix’s agent conjured up a colorful but fake biography of the movie star, claiming he was a deputy U.S. Marshal and a Texas Ranger. He was neither.

Tom was a Pennsylvania native who learned to ride at an early age. In 1898, he enlisted in the military during the Spanish-American War but never saw action and was not a Rough Rider. Later, he found work with the 101 Ranch Wild West Show where he showed his horsemanship and shooting skills. He then moved to films and became one of the greatest cowboy stars in the early years of Hollywood.

How did people sleep on long stagecoach journeys?

The truth is, they didn’t get much sleep. It was a crowded, bumpy and miserable ride, and the passengers had to sleep sitting up in their seats. The transcontinental stagecoaches ran 24/7 and the trip took about 25 days, so you can imagine how bedraggled the passengers were when they reached their destination. One could opt to get off at a station and wait for the next stage—and maybe catch a nap—but there was always the chance there wouldn’t be room.

What’s the story about Billy the Kid killing Joe Grant?

Joe Grant was reputed to be a cocky, loud-mouthed cowboy. His fatal meeting with Billy happened on January 10, 1880, at Hargrove’s Saloon in Fort Sumner, New Mexico. Grant was drunk and obnoxious. He walked up to a Chisum cowhand named Jack Finan, who had a nice-looking ivory-handled pistol in his holster. Grant lifted it out and inserted his own in the holster. Finan didn’t want to provoke Grant, so he didn’t take offense.

Billy walked over to Grant, looked admiringly at Finan’s pistol, lifted it out of Grant’s holster saying, “That’s a mighty nice-looking six-shooter you got.” Billy spun the cylinder. He noticed there were three empty cartridges in the cylinder so he spun the cylinder again, making sure the hammer would fall on a spent cartridge.

Grant had already made it clear he was going to shoot somebody that night—and boasted that his target was John Chisum.

Billy told him the man he was planning to shoot was not John but his brother Jim.

Grant called him a liar; Billy turned and walked towards the door. Just as Billy figured, Grant pulled his pistol and when Billy heard the click of a hammer falling on an empty cartridge, he spun around and fired three quick shots.

The shooting of Joe Grant didn’t get much coverage in the press. Robert Utley, in his fine biography of the Kid, says it was “…simply another saloon dispute that ended fatally.”

How did the term “heeled” come to mean carrying a weapon?

It seems to have originated in the “sport” of cockfighting. A well-heeled rooster was provided with sharp spurs that could inflict maximum damage on its opponent. From this came the American frontier slang of being armed. And from that came the modern concept of being well-fixed in terms of money.

What was Virgil Earp’s law officer career after he left Tombstone?

In June 1886, Virgil opened Earp’s Detective Agency in Colton, California. In July of the same year, he was elected constable of Colton and a year later he was elected city marshal. Virgil was reelected to that position in April 1888 and resigned in March 1889. Colton was not a wild town like other towns he’d kept the peace in, and perhaps Virgil wanted a little more action.

After a few years of wandering and trying different jobs, Earp was hired in January 1905 as deputy sheriff for Esmeralda County, Nevada. He was still in that position when he died that October.