As the shadowy figure entered the darkness of the anteroom, he could hear actor Harry Hawk reciting his soliloquy on the theatrical stage below.  The man in black opened the door to the presidential box and found himself standing behind its four unsuspecting occupants.  Raising the single-shot pistol to his victim’s head, he pulled the trigger at point-blank range. In the ensuing chaos and brimming smoke from the black powder explosion, the perpetrator leapt from the balcony onto the stage so setting into motion one of the most bold and infamous assassinations in American history.

The single shot culprit, a .44 caliber pocket pistol known as the Deringer.  A pistol so small as to be easily concealed alongside the nine-inch dagger John Wilkes Booth used to fight his way out of the box and onto the stage, leaving behind a dying Abraham Lincoln as well as the iconic pocket pistol that would forever change the course of history.

Pocket pistols have a storied history.  Primarily used as a concealed deterrent for protection in an age when most firearms of the pistol type were large and bulky, the pocket pistol evolved based on stealth and etched its way into American carnage in a multitude of ways.

The most iconic pocket pistol was the Philadelphia Deringer. Invented in 1852 by gunsmith Henry Deringer, this gun was a .41-caliber muzzle-loading percussion pistol that packed a punch.

Deringer never sought to patent his invention, which allowed the growing firearms industry to capitalize on his success. While some manufacturers simply stole his design, others intentionally misspelled the description of the concealable handgun as “derringers” to sidestep trademark infringement.

Prominent manufacturers like Colt and Remington produced their own derringer pistols in a range of calibers with the most successful being Remington’s double-barreled derringer, also known as the Model 95. It featured a two-shot, over and under design and an estimated 150,000 were produced between 1866
and 1935.

Although open carry was common practice on the range and in towns into the late 1800s, concealed carry was also popular, and the demand and desire for a capable, yet easy to hide, handgun created a burgeoning market for the creative gunsmiths of the day.

Many pocket pistols were simply smaller versions of standard revolvers that folks could carry in their pockets.  Excellent examples of these firearms include a variety manufactured by Colt.  The 1848 Baby Dragoon, 1849 Colt Pocket, and Wells Fargo Pocket brought big power into a smaller package, as did Colt’s 1860 Army Snub Nose and 1862 Police Pocket pistols.

Another popular pocket-sized handgun was Smith & Wesson’s 1878 Model 1½, a favorite of gamblers, detectives, and ladies of the evening. This five-shot revolver was the first small-bore Smith & Wesson to use the star-type cylinder ejector, and its rebounding hammer design all but guaranteed safe carrying when the cylinder was fully loaded.

Like the Smith & Wesson Model 1½, Remington’s 1863 Pocket revolver was a cap and ball beauty with no trigger guard, a sleek profile, and a reputation of keeping card players and other gambling types honest. 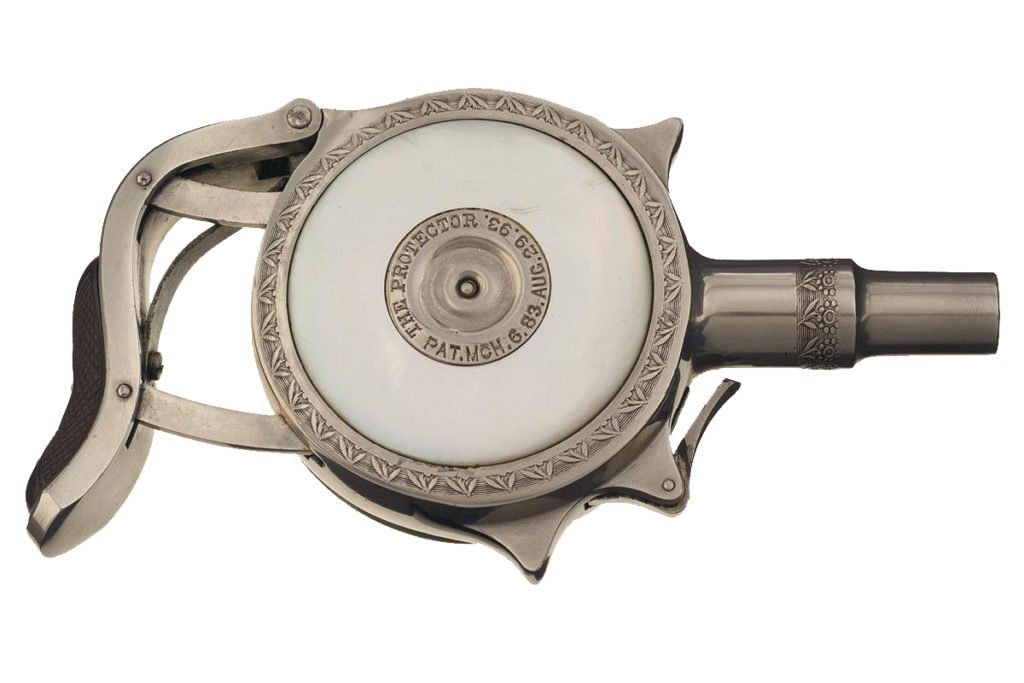 Then there is the pepperbox. With a history that dates back to the 1500s, the pepperbox made its resurgence in the late 1800s becoming a favorite concealed-carry gun of lawmen, gamblers and those in need of a reliable backup.

Although easily concealed with multiple shots at the ready, the pepperbox did have its drawbacks, including the fact that it wasn’t very accurate. Mark Twain once said, “The safest place to be when facing a Pepperbox-wielding antagonist was standing directly in front of him.”

Perhaps some of the most unusual pocket pistols ever made were the Chicago Protector Palm Pistols. The design of these pistols was based on one patented by Jacques E. Turbiaux of Paris. Turbiaux described his pistol as a “revolver which may be held in the hand with no part exposed except the barrel.” The Protector was the size of a pocket watch and was engaged and fired by squeezing it with your hand.

Today, you can get your hands on replicas of most of these iconic pocket pistols from modern-day manufacturers Cimarron Firearms, Taylor’s & Co., EMF Company, Bond Arms, Ruger and Colt, as exhibited on these pages.

Pick your poison, then relish in the history of these pocket-sized powder kegs that continue to enthrall and entice gun aficionados of the 21st century.

Ken is publisher and chief revenue officer for True West. He is an accomplished photographer and Emmy winning video producer and lives in Cave Creek, Arizona.