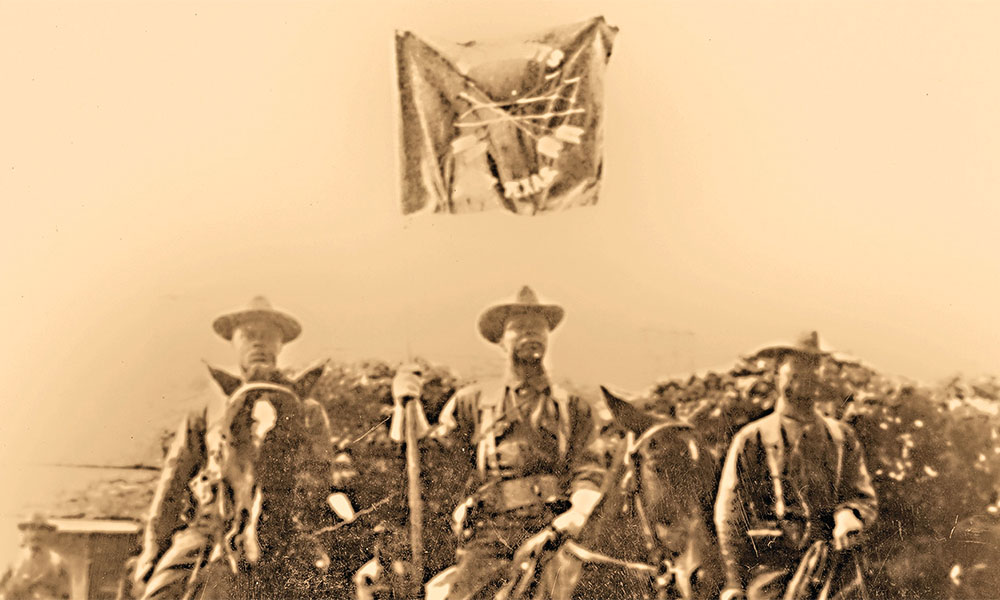 These black scouts were descendants of runaways fleeing enslavement by whites. They sought refuge in  Florida in the late 18th and early 19th centuries. During the Second Seminole War (1835-1842) they united with the Indians opposing American expansion into the region, subsequently leading to a bloody, expensive war. Despite desperate fighting, a majority of the Seminoles and blacks were forced to relocate to today’s Oklahoma.

In 1849-50, following their joint removal, blacks led by John Horse and Seminoles under Wild Cat, migrated to Mexico. Nearly a decade later the Seminoles returned to the United States, but the blacks remained on the Mexican side of the border where slavery was banned. Some of them even fought against Maximillian’s foreign invaders, and John Horse rose to become a colonel in Benito Juarez’s forces.

By 1870 many of the blacks had made their way back to Indian Territory where United States Army officers began to be recruit them as scouts. Their knowledge of the wilds of West Texas made these so-called “Seminole Negro-Indian Scouts” invaluable. They served with distinction from 1873 through 1882, engaging in 26 expeditions, a dozen of which took place as part of major campaigns, and though often heavily outnumbered, this intrepid, rugged band did not have a single man killed or seriously wounded during this intense period. Although they never fielded more than 50 men at most, their commanders praised them as “excellent hunters and trailers, and splendid fighters,” as evidenced by the fact that, in spite of their small numbers, received an unprecedented four Medals of Honor. Even after desperate duels with the Comanches and Kiowas, who fought to maintain their traditional way of life and buffalo range, had concluded, these scouts remained on active duty. They continued to serve, as long service veteran John July did as a sort of “Avant Courier,” according to Army surgeon John Vance Lauderdale’s diary recorded while stationed at Fort Davis, Texas. Indeed, a handful of this hardy band of brothers continued in active service through the early 20th century at Fort Clarke, Texas, where their descendants live to this day.