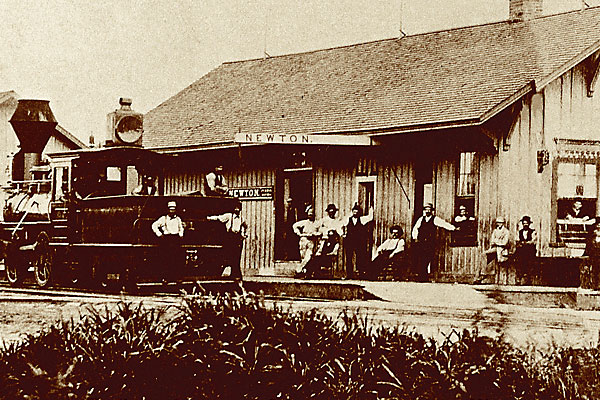 We’re talking about the Central/ Sunflower/Wheat/Jayhawk State. This state has more nicknames than Bob Boze Bell (but you can’t print what folks call BBB).

After a fight over free- or slave-state status (thus another moniker, “Bleeding Kansas”), the free-state Wyandotte Constitution was ratified in 1859, and on January 29, 1861, Kansas entered the Union as the 34th state.

Rock Chalk, Jayhawk! (What does KU’s cheer mean, anyway?) I’m off to find 150 spots worthy of a sesquicentennial party.

The first city incorporated in the state, Leavenworth, has a history that predates statehood. See the (1) First City Museum, if it’s open, that is; budget cuts, alas, keep trimming back the museum’s hours. Learn more history while walking the (2) Leavenworth Historic Wayside Tour. At Fort Leavenworth, the oldest active Army post west of the Mississippi River (established in 1827), check out the excellent (3) Frontier Army Museum.

In Atchison you’ll find the (4) Amelia Earhart Birthplace Museum and the (5) Atchison County Historical Museum, across from which stands the (6) Atchison Rail Museum’s rolling stock. In its last months of operation, the Pony Express originated here, so check out the (7) granite memorial at Third and Main.

Kansas’s best treat for Pony Express buffs, however, is in Marysville, where Joseph Cottrell leased his stone barn to the Pony in 1860. That barn is now home to the (8) Pony Express Original Home Station No. 1 museum.

Other trails—Oregon, California, Mormon, Overland—crossed this area. Later, during 1880-81, Otoe Indians were forced along the Otoe-Missouria Trail during their removal to the Indian Territory (present-day Oklahoma). Check out the (9) Historic Trails Park and its rope-ferry replica of the ferry Francis J. Marshall established in 1852.

Next stop is the (10) Pawnee Indian Museum near Republic—featuring the excavated floor of an 1820s Pawnee earth lodge.

Don’t miss (11) Nicodemus. The first Western town built by and for black settlers, Nicodemus was founded in 1877. Today, five structures are preserved, and most of the town’s two dozen residents trace their roots to the original founders.

The Annie Oakley Motel is the last thing I expected to find in Oakley. Annie never lived here. This is Buffalo Bill Country, so the (14) Buffalo Bill sculpture is a better fit, commemorating Cody’s alleged buffalo-hunting contest with Fort Wallace scout William Comstock in 1868. For earlier history, check out the fossils at the (15) Fick Fossil & History Museum. Nature lovers might prefer (16) Monument Rocks, the “Pyramids of the High Plains,” towering above the plains 25 miles south of town.

In Garden City, I take a guided tour of the (20) Sandsage Bison Range & Wildlife Area, once part of the Kansas National Forest. No kidding. Most trees planted in the early 1900s didn’t take. I count about a dozen. But bison … this is their country, and watching them graze is a treat. Garden City is also home to the (21)  Finney County Museum and (22) Lee Richardson Zoo. Here’s hoping investors will be found to restore the (23) Windsor Hotel, the 1887 “Waldorf of the Prairies.”

Head east to the (24) Santa Fe Trail Museum in Ingalls and the historic marker on the (25) Cimarron Crossing of the Santa Fe Trail before reaching legendary Dodge City. We’re talking cattle (you can still smell ’em), and the home of Wyatt Earp and Matt Dillon. Check out (26) Boot Hill Museum, (27) Fort Dodge, (28) Kansas Heritage Center, (29) Gunfighters Wax Museum and (30) Mueller-Schmidt Home of Stone. Take a (31) historic trolley tour and visit the (32) Depot Theater Company. In August, the (33)  Dodge City Roundup Rodeo bills itself as the “greatest show on dirt.”

Up the road, with nine restored buildings, (34) Fort Larned is a superbly preserved 1859 fort, and the (35) Santa Fe Trail Center shouldn’t be ignored. Nearby (36) Pawnee Rock State Park protects the sandstone bluff. Stroll through (37) downtown Pawnee Rock before heading to Great Bend.

In Great Bend, you can learn area history at the (38) Barton County Historical Museum’s village of restored buildings. Also worthwhile are the (39) Kansas Oil & Gas Hall of Fame and Museum, and the (40) B-29 Memorial.

On the way to Hays, drop in La Crosse at the (41) Barbed Wire Museum,
(42) Rush County Historical Museum and the (43) Post Rock Museum. I count more museums in La Crosse than people.

Now I’m in historic and fun Hays. Check out (44) Boot Hill Cemetery as well as the (45) Chestnut Street District—a (46) self-guided walking tour of the historical buildings is mandatory. And (47) Fort Hays is a must. You might even spot a (48) small buffalo herd across from the fort. Around Independence Day, the (49) Wild West Festival brings in top music acts.

While heading east on I-70, you should swing into Victoria. A (50) marker on Third Street honors the railroad workers killed by Cheyennes in 1867. Completed in 1911, the (51) St. Fidelis Catholic Church was the largest church west of the Mississippi River, earning the name “Cathedral of the Plains.”

In Ellsworth, check out the (53) Hodgden House Museum Complex. Walking the (54) streets of the “wickedest cattle town in Kansas” is worthwhile.

Wildlife watchers shouldn’t miss the (55) Cheyenne Bottoms Wildlife Area in Great Bend. In McPherson, see the (56) McPherson Museum, tour the (57) McPherson County Courthouse built in 1893 and check out the (58) circa-1888 McPherson Opera House.

Salina’s (59) Smoky Hill Museum and (60) Yesteryear Museum are fun. In October, Blues lovers can enjoy Blue Heaven Studios’ (61) Blues Masters at the Crossroads, and you’ll usually find something going on at the (62) Stiefel Theatre. Yet Salina’s biggest attraction might be tiny but tasty onion-stacked hamburgers at the (63) Cozy Inn, serving “sliders” since 1922. No, you can’t order a burger without onions.

Yet on a Sunday morn in Abilene, the (64) Eisenhower Presidential Library and Museum is open. You can spend hours there whether you like Ike or not. Afterward, fill up on a chicken dinner at the (65) Brookville Hotel, a Kansas tradition since 1915. The (66) Old Abilene Town is touristy, and the (67) Heritage Center and (68) American Indian Art Center are must-stops. Ride the (69) Abilene & Smoky Valley Railroad, and hit the (70) Seelye Mansion and (71) Greyhound Hall of Fame.

At Council Grove, the (80) Kaw Mission tells the story of the Kaw (or Kansa) Indians. The People of the South Wind gave the state its name before they were removed to present-day Oklahoma in 1873.

Head southbound again, driving into the majestic Flint Hills. At Tallgrass Prairie National Preserve near Strong City, you should tour (81) cattleman Stephen Jones’s 1881 ranch, then hike the (82) Southwind Nature Trail. You  can also opt for an affordable (83) bus tour from late April through October.

North of Wichita will take you to Newton, home to the (84) Harvey County Historical Society Library & Museum, (85) Kauffman Museum, (86) Warkentin House Museum and (87) Newton Train Station. This cowtown once “had a man for breakfast every morning,” but today it has sweeter, tastier offerings at (88) Breadbasket, (89) BK’s Bakery Shop, (90) Casey’s General Store and (91) Druber’s Donut Shop.

Probably 150 worthy stops for history buffs can be found in Wichita alone.

Once the red-light area, the (100) Delano historic district now showcases galleries, restaurants and shops like the fun (101) Hatman Jack’s. Then visit (102) Oldtown and the galleries, theaters and shops in converted brick warehouses. Where’s the beef? Order a steak at Oldtown’s (103) Whiskey Creek Steakhouse.

Head west to Greensburg, home of the (104) largest hand-dug well—109 feet deep and 32 feet in diameter when completed in 1888. Then follow the yellow-brick road (not really) to Liberal, where a (105) re-creation of Dorothy’s house from 1939’s The Wizard of Oz stands on the Seward County Museum grounds. Liberal was Coronado country, so a (106) statue of the Spanish explorer stands near one of Dorothy and Toto. Liberal also hosts (107) International Pancake Day—the town’s version of a Mardi Gras party—on March 8 this year.

Eastbound again, I stop in Meade for the (108) Meade County Historical Museum and walk through the hidden tunnel at the (109) Dalton Gang Hideout.

On to Medicine Lodge, where (110) temperance leader Carry A. Nation’s home is a National Historic Site. No, it’s not B.Y.O.B. Next door stands the (111) Stockade Museum, but the area is probably best known as the site of U.S.’s 1867 Medicine Lodge peace treaty with several Plains Indian nations. That event is re-enacted every three years, and we’re in luck in 2011 as the (112) Medicine Lodge Peace Treaty 2011 is scheduled to take place on September 23-25.

Caldwell, the “Border Queen City,” was yet another wild cowtown during its 1880s heyday, then was the jumping-off point for the 1893 Cherokee Strip Land Run. Check in at the (113) Cherokee Strip Visitors Center & Museum, pick up a map and find the (114) historical markers throughout town. In May, take in the annual (115) Chisholm Trail Festival.

Up the road is another Chisholm Trail site, so visit the (116) Chisholm Trail Museum in Wellington, then drive to Arkansas City’s (117) Cherokee Strip Land Rush Museum before touring (118) La Hacienda Buffalo Ranch.

Fans of Laura Ingalls Wilder’s books shouldn’t miss the (119) re-created Little House on the Prairie outside Independence, while the (120) Independence Historical Museum covers the region’s history.

Few Kansas towns preserve history like Coffeyville, where the Dalton Gang made a career blunder when the gang members tried to rob two banks in 1892. The (121) Old Condon Bank still stands—now it houses a museum and Chamber of Commerce office. Check out the (122) Dalton Defenders Museum, stroll down (123) Death Alley where many of the gang members bit the dust and visit the (124) restored jail. Drive to (125) Elmwood Cemetery where the remains of many outlaws and town defenders are buried. For lighter fare, tour the (126) historic 1904 Brown Mansion.

In Baxter Springs, an early cowtown that primarily draws Route 66 patrons, a marker at the Crowell Bank building tells me the bank was robbed in 1876 by Cole Younger and Jesse James. I don’t believe they pulled off that heist, but if they were to stop in today, they could savor great food. The building houses (127) Cafe on the Route, one of Kansas’s best eateries. Once your tummy is full of Main Street Chicken and deep-fried cheesecake, you should burn off the calories while taking in the area’s cattle trade heritage at the (128) Baxter Springs Heritage Center & Museum.

Don’t miss Osawatomie’s (132) John Brown. Relive “Bleeding Kansas” and the 1856 Battle of Osawatomie at the site’s (133) Freedom Festival each September. Folks like to say the Civil War began here.

Now I’ll cheat. Gates & Sons is a Kansas City, Missouri, barbecue icon, but pig out at a Kansas location in (140) either Leawood or Kansas City.

William Quantrill and his bushwhackers burned Lawrence in 1863, but this city today is vibrant, fun and fascinating. See the (141) KU Natural History Museum, walk (142) Massachusetts Avenue, making sure to drink a beer at (143) Free State Brewing Company and check out, or into, the (144) historic Eldridge Hotel, first established as the Free State Hotel in 1855.

Lecompton also claims to be the birthplace of the Civil War. Find out why at (145) Constitution Hall State Historic Site and the (146) Territorial Capital Museum.

Finally, you’ll reach Topeka, the state capital. The focus is railroads at the (147) Great Overland Station, World War II at the (148) Holley Museum of Military History and Indians at the (149) Native American Heritage Museum. I can’t think of a more fitting end to a Kansas sesquicentennial road adventure than the (150) Kansas Museum of History.