Will the Real John Clum Please Stand Up? 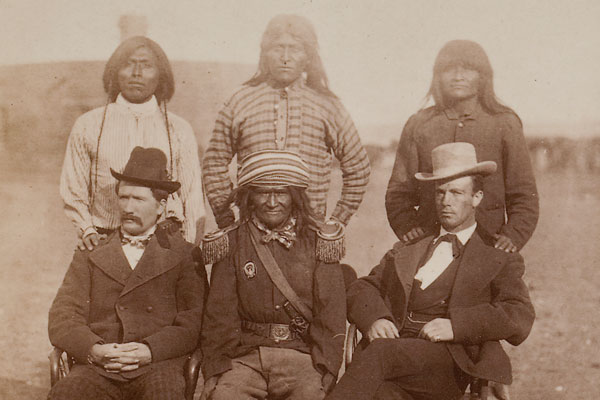 All of these photographs are of John Clum.

Yet one stereoview shows the Apache Indian agent twice; a stereoview that hammered in for $2,000 at Cowan’s American History auction on December 10, 2010, sold along with others taken by Henry Buehman during 1874-77, when Clum served as agent at the San Carlos Apache Indian Agency in Arizona.

But how could he be in the same photo twice? Well, that’s because he’s not…and herein awakens a mystery that we invite you to help us solve.

You see, in 1874, the 23-year-old Clum created an Apache police force and hired 29-year-old Martin Sweeny, a veteran cavalry sergeant who had been working as a blacksmith on the reservation since 1868, to work for him as a clerk. “His military training, plus his sympathetic understanding of Apache character, enabled him to teach military tactics to the Indians so that they not only learned how to drill, but enjoyed it, and became excellent soldiers,” Clum wrote.

The only photo of Clum that has the best provenance is the one of him with his wife Mary, whom he married in November 1876, a few months before he would resign his position at San Carlos. The photo dates between then and December 1880, when Mary died.

For now, we have grouped these photos in accordance with this belief. Yet we could use your help in finding definitive proof that will solve the mystery of which man is the real Clum!