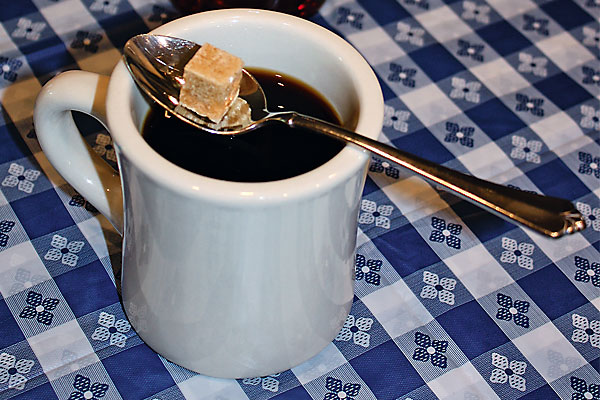 We’ve all heard of coffee with cream and sugar, but with lizards?

Yep, such a concoction was drunk in Texas in the late 1800s.

“At one of the dances a large wash pot of coffee, surrounded by numerous tin cups, was kept boiling all night under a large tree in the front yard, so that the guests might refresh themselves whenever they wished. While the cowboys and their sweethearts danced light-heartedly inside the house, some tree lizards also engaged in dancing in the live oak tree just above the pot of coffee,” recalled cowboy J.T. Smith, who worked at the Caufield Ranch in McGregor, Texas, near the 1849 Fort Gates.

At about three a.m. during the dance, a woman asked Smith to get her a cup of coffee. With only a small amount left, he scraped the bottom of the pot to fill her a cup. The lady sipped the coffee on the porch and chatted with Smith. As she neared the bottom of the cup, a light from the door illuminated the contents of her cup. When she looked down, she was horrified to see a boiled lizard in the bottom. Smith recalled, “I condemned each separate member of the lizard tribe to Hades in language that was not suitable for Sunday school.”

The first literary reference to coffee being drunk in North America is from 1668. In 1773, the Boston Tea Party was planned in a coffeehouse called the Green Dragon Tavern. In protest of the tea tax, the Continental Congress named coffee the new national beverage of the U.S. in 1777. Knowing this explains why coffee was the popular drink served at “tea time” rather than tea.

By 1899 an estimated 50 million Americans drank coffee. The largest coffee importer at that time was none other than Arbuckle Brothers, which made Ariosa coffee that was a chuckwagon staple during Old West cattle drives. Arbuckle was also the largest coffee dealer, which led the Duluth News to report in 1899 that “…the name Arbuckle has become synonymous for immense dealings in the favorite breakfast beverage.”

Sometimes “coffee house” was used as a catch-all. In 1870 Texas’s Galveston Tri-Weekly News reported, “New Coffee House. To be called the San Francisco Wine House…. The best of everything will be served in the way of liquors.” Hmm…no mention of coffee.

The cook and his coffee got cowboys through exhaustive cattle drives. One cook in Kansas City, Missouri, however, proved to be rather greedy when it came to his coffee. In June 1889 police officer Roach found 25 pounds of coffee stashed under a sidewalk in town. Knowing this was strange, the cops kept the coffee at their office and watched the sidewalk where it had been hidden. On June 13, police saw John Beach at the coffee stash’s location. John was the cook at a nearby camp. Mr. Burk, a contractor at the camp, told the police the coffee had been stolen from the camp; the officers promptly arrested Beach.

If you think iced coffee has only recently become popular, then you might be surprised to learn the drink was trendy in the late 1800s. South Dakota’s Aberdeen Daily News reported in 1889, “Cold coffee is a delicious beverage when well made. Coffee ice made of strong coffee in a freezer, and served in cups with whipped cream, is a dainty dessert or a convenient part of the afternoon tea menu….”

Coffee was made in a variety of ways during the 1800s. Some roasted their own beans, while others bought their beans roasted. Some ground their coffee at home, while others bought theirs ground. Camp cooks almost always cooked their coffee in a pot and threw in some eggshells to settle the grounds. Others suggested that adding eggshells was ridiculous. Most did agree that “coffee boiled was coffee soiled.”

Not unlike today, coffee drinkers liked to drink their coffee in a variety of ways, including black, with cream, with sugar, with cocoa and with alcohol; try the 1894 Brandy Coffee recipe shared here.

Place the brandy in a small saucepan and slowly warm over low heat. Pour coffee into a cup.

Place a teaspoon over the cup and pour a little brandy onto the spoon. Add the sugar cube and light the brandy on fire. Extinguish the flame by putting the spoon in the coffee.

Note: Getting the temperature to light the brandy is tricky, so you could just add the brandy and enjoy!