Where the Bodies Are Buried 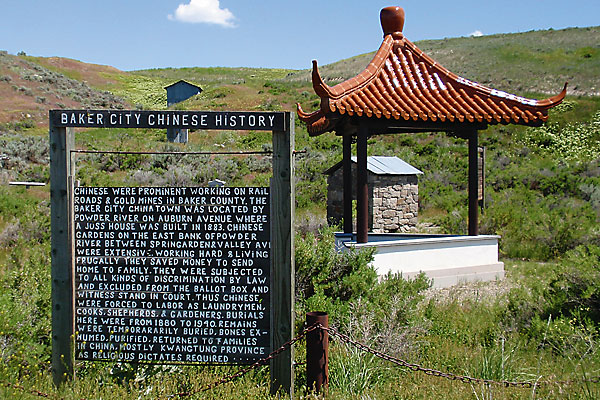 In the hills outside the northeastern Oregon town of Baker City is a cemetery not unlike many that dot the old mining towns of the West.

Except this one has no graves, just pits and depressions where bodies were once buried.

It was a mystery that fell to Oregon Public Broadcasting radio correspondent Tom Banse to solve.

In the spring of 2010, a listener offered to give Banse a box full of old documents and photos. Some were written in English, some were in Chinese. They indicated that the bodies of hundreds of Chinese immigrants had been exhumed from Pacific Northwest graves and returned to their native country.

Banse visited Chinese cemeteries in towns like Baker City and John Day. What he found is something of a forgotten story.

Thousands of Chinese came to this country in the 19th century, looking to make their fortunes in industries like mining and railroad construction. Most found a tough existence, marked by terrible work conditions and discrimination. Few found much money.

When these Chinese workers died, their bodies were buried primarily in Chinese-only cemeteries.

Yet Chinese culture required that the bodies be returned to China, to be near the spirits of their ancestors. The Chinese Consolidated Benevolent Associations (CCBA) formed in many cities with large Asian populations to take on the task of sending their people home.

The association typically waited at least a year (and sometimes decades) after an individual’s death to transport the body, at which point the remains were reduced to bones. Collected donations allowed the identified remains to be exhumed and sent to Hong Kong. The CCBA then put ads in Chinese newspapers, telling people the bodies of their loved ones could be picked up. A surprising number of them were.

The CCBA kept meticulous records; reporter Banse found that out firsthand with the materials he was given.

Without complete records, it’s hard to say just how many bodies were returned to China over the decades.
In 1928, according to the papers Banse examined, 615 remains made the journey. Some 559 were collected after WWII.

But that last group ran into problems. The Chinese Civil War was raging in 1949, when the bones were sent to Hong Kong. The communists closed the country’s borders, and the remains were stored in the autonomous region of Hong Kong, waiting for a break in relations. It never came. Today, those Chinese remains are crated in a warehouse, waiting to be reunited with ancestors.

That may never happen. Finding living relatives in China is considered next to impossible, especially since more than 60 years have passed.

As for the box of documents, Banse says Oregon Public Broadcasting is working with specialists to preserve the materials, which will probably be donated to a museum or the Portland Chinese Benevolent Association (yes, it still operates).

The mystery of Oregon’s empty Old West cemeteries is solved.

Human remains were reburied next to the 1877 Mount Moriah Cemetery, three years after they had been discovered by workers at a construction site in town.

That location was the 1876 Ingleside Cemetery. It closed in 1878 when the city expanded, and most of the remains were moved to Mount Moriah. But not all of the bodies were found at that time.

Researchers say the body discovered in 2010 was probably that of a Chinese or American Indian male, between the ages of 25 and 35. Further identification proved impossible.

Deadwood Historic Preservation Officer Kevin Kuchenbecker says he was not aware of such a ceremony ever happening before, adding, “Not only are we protecting our history, but we are making history as well.”