Cutting Through the Smoke 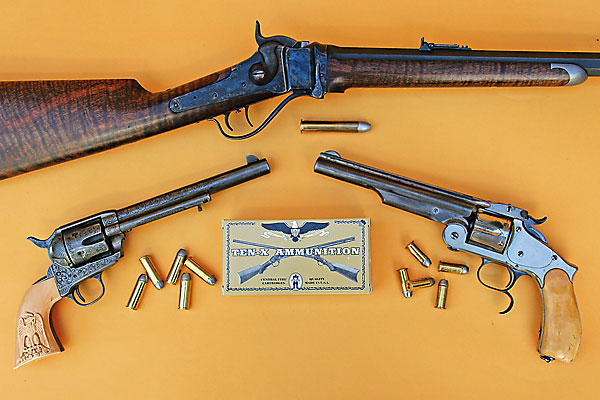 “I love the smell of napalm in the morning!”

These were the words of Robert Duvall’s character, Lt. Col. Bill Kilgore, in the classic 1979 film Apocalypse Now.

Well, to paraphrase Col. Kilgore’s comment, “I love the smell of blackpowder anytime!”

I have to admit, while I enjoy shooting all types of firearms—from the earliest matchlocks to some of today’s fastest machine guns, and from tiny derringers to eight-inch howitzers—I feel a special nostalgic thrill when I smell the odor of blackpowder (yes, I’ll admit, it’s an odor and not an aroma). The voluminous clouds of white smoke swirl around me, accompanied by the boom of blackpowder (as opposed to the ear-splitting crack of smokeless powder), along with the gentler shove of recoil I experience when firing a blackpowder-stoked firearm.

Thanks to Ten-X Ammunition, those who share my love of shooting vintage or replica blackpowder-type cartridge firearms can shoot them in cowboy action competitions, hunting or for casual plinking, with original-type blackpowder loads! In business since 1991, Ten-X Ammunition primarily produces ammo for shooters who enjoy shooting old-timey six-guns, lever guns, single-shot buffalo guns, military weapons and other guns from yesteryear. They commercially produce ammunition for more than 80 different loads in more than 40 different chamberings—with 34 of them offered in a blackpowder substitute.

Most of Ten-X’s loads are made for frontier-era hardware, including long guns, such as the various models of Sharps, Remingtons, Winchesters, Spencers, Springfield trapdoors, Marlins, Sniders and Martini-Henry rifles, as well as single- and double-action revolvers, such as Colts, Smith & Wessons (S&Ws), Remingtons and Merwin Hulberts.

Ten-X offers a number of its loads in either smokeless powder or blackpowder substitute. What’s more, the company’s blackpowder-type cartridges are available in a vast assortment of calibers that range from .32 S&W pocket revolvers to the .38, .44 and .45 Colt-size loads, all the way up to .50-90, .50-95 and the big .577 Snider and Martini rounds.

To get the best results in its blackpowder-type cartridges, Ten-X uses both traditional Triple Se7en and a special blend of powder called Triple Se7en Cartridge from the Hodgdon Powder Company. Because some older cartridges don’t work as well with Triple Se7en,
Ten-X’s President Richard Pumerantz, PhD worked with the chemists and ballisticians at Hodgdon to develop a powder that is about 15 percent less energetic and develops lower pressures than Triple Se7en. This reduced pressure Triple Se7en Cartridge lengthens the life of the brass and provides a more consistent burn rate, thus generating greater accuracy and more appropriate velocities in the larger calibers, thereby more closely resembling real blackpowder. Another bonus to these powders is less residue, which makes cleaning quicker and easier.

If you’re like me and enjoy shooting vintage or replica guns with an original-type gunpowder, give Ten-X Ammunition a try. You’ll have a smokin’ good time!