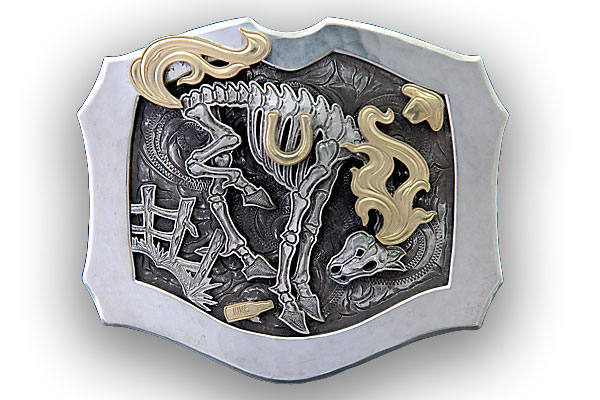 Out West, the belt buckle’s significance reaches beyond its functionality of keeping your pants from sagging.

The buckle can proclaim the wearer’s name, initials or brand, boast of a significant achievement or reveal devotion to country or a calling. Some folks call the Western buckle the “cowboy calling card.”

To discerning Westerners, a buckle is the finishing touch—one could say the defining touch—to what they wear and who they are. Centrally located on the body, the buckle ties together all the other elements of the Western wardrobe. In Texas, the cowboy buckle is the nexus of couture.

Nineteenth-century cowboys often wore suspenders with their cotton duckin’s and wool California pants, which had fairly high waists. Even the “waist coveralls” first patented by Levi Strauss had back straps and buttons for suspenders. Otherwise, buckles were ornamental, as on the belts worn by the military, or strictly utilitarian. Not until belt loops first appeared on Levi’s dungarees in the mid-1920s, did belts and buckles find an audience with everyday Americans.

The first Western buckles are thought to have been adapted from gunbelts worn by heroes and villains alike on the silver screen to dazzle audiences. Tradition has it that Texas Rangers secured their holsters on wide leather belts that were, in turn, secured with buckles on narrow billets. Ranger belts then gave rise to the fancy three- and four-piece buckle sets that continue to be popular today.

Trophy buckles started out as a useful alternative to trophy cups awarded to winning rodeo cowboys. Several sources credit Robert Schaezlein with the first trophy buckles. He produced them for the championship events held at the San Francisco Cow Palace in the late 1920s.

Swedish immigrant Edward H. Bohlin gets a lot of the credit for putting the luster on buckles. Bohlin cowboyed in Montana and Wyoming before taking up leathercrafting and saddlemaking. While moonlighting as a rope twirler in a vaudeville show, Bohlin met cowboy movie superstar Tom Mix in 1922 and began making saddles and belts for him. Bohlin’s silver accents and trim quickly became his—and Mix’s—signature look.

About the same time, other silversmiths were designing buckles with Western motifs, including Schaezlein in San Francisco and Sunset Trails in Los Angeles. Yet Bohlin became the most sought-after silver designer in Hollywood, and his original buckles remain highly collectible. His designs are still available on new buckles from the Bohlin Company in Dallas, Texas.

Some buckle designers are influenced by the early styles. Texas silversmith Clint Orms first got into making buckles as a way of preserving the designs of his forebears. David Dear, whose studio is in New Mexico, was first inspired by the buckles worn by Gene Autry and other cowboys in the 1935 Sci-Fi Western The Phantom Empire.

The value of silversmiths like Horst Schrader, Kit Carson and Lee Downey is underscored by the museum and art gallery exhibits and awards that recognize their efforts. Last year, the Lyons Wier Gallery in New York City included the work of 10 contemporary buckle makers in an exhibit featuring Pop Art cowboy paintings by Matt Straub, who was born in Cheyenne, Wyoming. The exhibit summed up the importance of Western contemporary buckle makers nicely: “The art of the buckle is one of the few bridges between the world of the cowboy, the art of the graphic designer, and the heritage of the European tradition of engraving, mastered by a select few silversmiths who are making award-winning, museum quality pieces.”

When shopping for a buckle, you’ll discover that handmade buckles are the most highly prized and high-priced buckles on the market. You can get a good-looking buckle for a lot less money, but you won’t get precious metals and stones, or the artistry that goes into a well-made buckle.

A belt buckle truly is a cinch to keep your pants up, yet it can say a lot more about who you are, or who you want to be, than you may realize. So buckle up with pride, and don’t forget that everybody will be checking out your calling card.