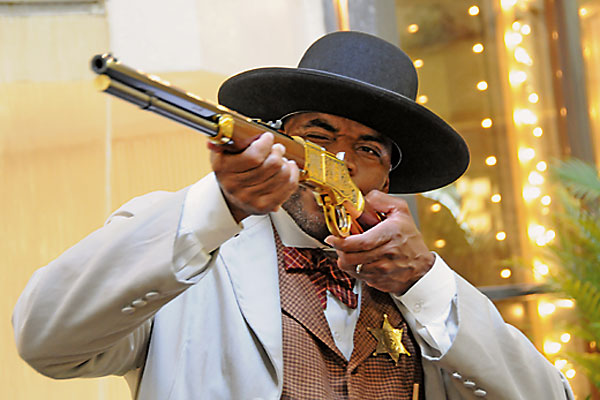 A long slender firing pin inspired the nickname “needle gun” for a custom, sporterized Springfield trapdoor rifle that was a popular single shot on the buffalo ranges.

Owning one of these today may make a straight shooter out of you too. If you have an original 1873 trapdoor that carries little-to-no collector value (say, a cut-down rifle), you may want to get it reworked by Cowboy Bob Giles.

The owner and operator of Cowboy Bob’s in Whitefish, Montana, Giles is known for his highly coveted, authentic-looking Bowie knives (he’s a True West “Best Knifemaker” winner) and his period-type gunleather and chaps. Yet he also specializes in producing, on a one-at-a-time basis, custom frontier-style variations of the Springfield trapdoor sporting rifles.

Many frontier hunters, including Buffalo Bill Cody, favored the Springfield in .50-70. Hide hunters liked this one-shooter because it was fast to reload, easy to clean, powerful and accurate.

The Springfield—regardless of caliber—was also a standard military-issue arm of the Indian campaigns during 1866-73. The Model 1865 Allin conversion Springfield in .58 Rimfire (converted from surplus Civil War rifles/muskets) was the first Springfield needle gun, but it was soon followed by the Model 1866 Allin in .50-70 centerfire. Also made from Civil War rifles and muskets, the Model 1866 employed a sleeved barrel to reduce the bore size from .58 to .50 caliber. Thus was born the U.S. Army’s first centerfire cartridge, and it used a Benet-type internal primer.

Originally a nickname for the German Dreyse military bolt-action rifle of the 1840s, needle gun was used to describe all hinged breechblock, single-shot rifles (including the English Enfield) by the time the 1873 Springfield trapdoor was introduced as a .45-70 infantry rifle and cavalry carbine configuration. Yet the trapdoor was the rifle most Americans associated with the needle gun.

Giles can rework one of these original 1873 trapdoors into handsome, straight-shooting replicas. He makes them from a combination of original and custom-produced parts (he does not work with replica gun parts), along the lines of the frontier-style Springfields sold by late 19th-century arms dealers such as E.C. Meacham Arms Co.; Schuyler, Hartley & Graham; N. Curry & Bro.; and Whitney Arms Company.

Giles fits his custom trapdoors with Green River octagon barrels, a straight stock (pewter fore end and under-barrel wiping rod are optional), a Rocky Mountain blade front and a Sharps-style buckhorn (with folding ladder) rear sight.  His trapdoor conversions can be had in a .45-70, .40-70 or .50-70 caliber. Prices on one of Cowboy Bob’s frontier trapdoor conversions start at about $1,800 (find out more by calling 406-862-4363).

Because Giles is working with original stocks and actions, his trapdoors look like genuine vintage guns—but in excellent working shape. I’ve handled several of these rifles, and I have friends who have hunted buffalo and other American big game with his trapdoors, so I can attest to their quality.

Considered the first black deputy U.S. marshal west of the Mississippi River, Bass Reeves arrested more than 3,000 felons and shot and killed 14 bad men during his more than 30-year service in the Indian Territory. Baridi Nkokheli of Fort Smith, Arkansas, who portrays Reeves at regional and national events, takes aim with an Uberti 1873 model short octagon-barreled rifle in .38-40 caliber.

Wellington LTD is offering it in a limited edition of 100. Based on Reeves’s own rifle, this issue is embellished with engraved artwork depicting scenes from his life, which are enhanced with 24-karat gold and jewelry-grade nickel. Visit WellingtonLTD.com for more information.