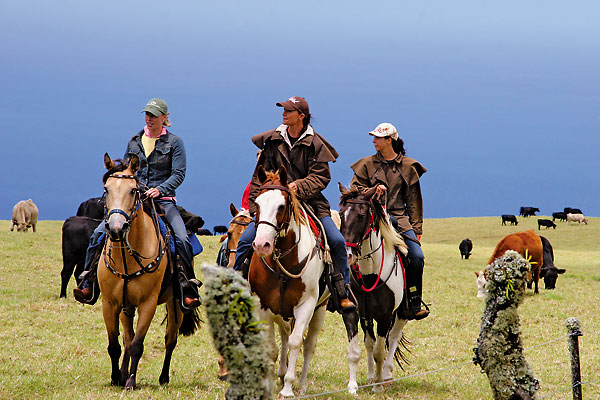 While riding at the 1847 Parker Ranch, the snow-capped Mauna Kea looks absolutely beautiful from afar; on those slopes, Hawaii’s original cowboys risked their lives to collect wild cattle.

Cattle have been on the Big Island since 1793, when Capt. George Vancouver gave five black Longhorns to King Kamehameha as a gift. When the cows multiplied, the king asked John Palmer Parker to take care of the cattle that were crushing crops and damaging the terrain. Parker built a business with the cattle, selling the hides and salted beef, and keeping some cattle for himself. He also brought in skilled Mexican vaqueros to teach the locals how to rope and ride to catch the wild cattle. Hawaii’s paniolo legacy had begun.

One of those historic cowboys was Eben Parker Low, known as “Rawhide Ben.” As John’s great-grandson, Low spent his early years at Parker Ranch. He wrote in his memoirs about the dangers involved in the cattle chase on Mauna Kea in May of 1893:

“Large logs lying hidden in the ferns and holes where wild sows and boars burrow for fern roots made this treacherous ground. You never know when your horse might step on a boar in slumber or a sow and her brood, hidden in the undergrowth, and then what a row of squeals and snorting of horses and cursing of men and perhaps the thud of falling horse and rider.”

Low would go on to lose his left hand and almost his life while attempting to rope a wild cow on the slopes of Mauna Kea, but he continued his life as a paniolo despite his handicap. He become an expert roper and was inducted into the Paniolo Hall of Fame in Kapolei. When Low died in 1954, his ashes were spread on Mauna Kea.

“Sometimes you dream. Someone yells your name or shakes you awake from the nightmare and you feel shame because others know you hurt inside. It’s all in the day’s work,” Low wrote. “Every man on the job can be dead tomorrow. You roll over and think of how proud you will feel if you can do some brave deed and deserve the praise of the men.”

When a fierce wind whips my face, while I ride over a neon green hill at Parker Ranch, I regret not bringing a paniolo’s poncho, like Low undoubtedly wore.

Past the ranch’s 19th-century stone corrals, my guide Karroll Penovaroff, of Cowboys of Hawaii, reveals how cattle were handled before the development of contemporary shipping standards. About 5,000 cattle were driven down the Mauna Kea slopes. From their holding corrals, they were herded to the shores, tied behind a small craft and rowed out to larger ships.

“No human or animal can drink salt water, so they were deathly afraid,” Penovaroff says. “Their heads are up in the air, and they are paddling. I mean, they are actually moving that rowboat! It was said that between every fourth or fifth trip, they’d lose a cow.”

The cowboys hoisted the survivors up by a rope sling to take them to the mainland. This process was long and dangerous for the cattle and for the cowboys, which is why only the toughest paniolos could work at Parker Ranch. Cowboys had to pass endurance tests to gain employment at the ranch. One of the cowboys tells me that this initiation process continues today, but the work is nowhere near as treacherous.

To get a sense of another Big Island ranch, I climb higher to ride at Kahua Ranch. I feel like I am on top of the world as we floor it up a grassy hill, literally riding through the clouds on strong ranch horses.

If you’re riding at Kahua, you might want to bring along a long duster jacket, as it will likely rain on your ride. It pours on mine, allowing me to experience the elements a paniolo deals with on a daily basis.

At 4,200 feet in elevation on the northern tip of the island, Kahua Ranch offers up lush, green hills that rise to the clouds. Below are magnificent views of the Kohala Coast and bright blue Pacific Ocean. I’d ride at Kahua just for the views. The cattle and sheep are truly lucky.

This smaller ranch, founded by Atherton Richards and Ronald Von Holt, dates back to 1928 and is run by the Richards family today. Diversification has kept the ranch going. In the 1950s, ranch cowboys trained horses and mules for the 1st Cavalry in the Pacific. Today, the guest ranch has about 3,300 predominately Black Angus cattle, along with sheep, greenhouses where vegetables are grown, windmills and solar panels that power the ranch.

Our guide Maile Andrade, of Na’alapa Stables, takes us up among Kahua Ranch’s cattle. The tame cows don’t move an inch as we ride through, nothing like what the paniolos would have experienced in the 1800s, when they fought to take back the island and begin the ranching life that remains strong to this day.