On the Cheyenne Heritage Trail 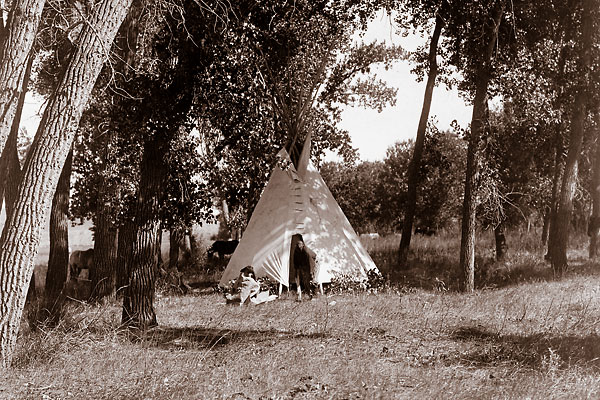 Hmmm. Several years back, the Oklahoma Tourism and Recreation Department created the Cheyenne Heritage Trail, a 400-plus-mile route featuring 10 stops and two “drive-by” sites in western Oklahoma that played key roles in the history of the Southern Cheyenne Indians.

Damned if I can find anything on it, though, and my queries to the Oklahoma tourism office have gone unanswered.

Who needs a map or a brochure or some state designation signs to point out the way? I’ll make my own Cheyenne Heritage Trail, starting in Clinton.

All right, most tourists who stop in Clinton are Route 66 buffs, and they’re headed straight for the Oklahoma Route 66 Museum—providing, of course, that they didn’t get their quota of Route 66 facts at the National Route 66 Museum in Elk City. And providing they’re traveling east, of course. If they’re westbound, then the Clinton museum is a warm-up for Elk City’s.

Clinton has more to offer, however, than classic cars and the Mother Road. At the Cheyenne Cultural Center (located, I’m told, on the original Red Wheat allotment on what was then the Cheyenne-Arapaho Reservation) are exhibits on Cheyenne artists. Lawrence Hart came up with the idea for the center as a way to help preserve Cheyenne culture.

A Mennonite pastor and enrolled member with the Cheyenne and Arapaho, Hart was a good choice to become the cultural center’s executive director. His great-grandfather was Afraid of Beavers, who had helped find the bodies of Black Kettle and his wife on November 27, 1868, after the Washita fight.

The center opened in 1977. That’s not as old as Clinton’s Mohawk Lodge Indian Store, of course. The store—the state’s oldest Indian trading post—was established in 1892 in Colony and founded by the Dutch Reform Church of New York as a way for local Indians to sell their goods. The store moved to Watonga in 1907 and to Clinton in 1940. Today, the post continues to buy, sell and trade authentic Indian wares.

From Clinton, it’s an easy drive northwest to Fort Supply, not far from Woodward and its fine (and truly comprehensive) Plains Indians & Pioneers Museum.

Fort Supply, of course, has been promoted from Camp Supply. Five buildings are being restored and preserved at the fort, established as Camp Supply in November 1868 near the confluence of Wolf Creek and the Beaver River. The Southern Cheyenne would have little use for it, since, on November 23, 1868, Lt. Col. George Custer and the 7th Cavalry departed from this camp for the Washita, attacking the Cheyenne camp at dawn four days later. The post eventually served as the Cheyenne and Arapaho Agency.

On June 11, 1870, the military post became the scene of something straight out of a B-Western. Roughly 200 Indians—mostly Kiowa and Comanche, not Cheyenne—charged the post, stole two horses and, presumably, tried to lead the soldiers into an ambush.

Okay, so the battle wasn’t quite as bloody as a B-movie. No soldiers were killed or wounded, and the Army estimated that six Indians were killed, in what was the “largest, most serious encounter in western Indian Territory between late 1868 and 1874,” according to the Oklahoma Historical Society, which runs the fort with help from the Historic Fort Supply Foundation.

Remaining buildings include the Ordnance Sergeant’s Quarters (1874) and the Civilian Employee Quarters (1882), both made of vertical logs, the Commanding Officer’s Quarters (1879), Officers’ Quarters duplex (1882) and the Guard House (1892), the latter the only brick building constructed at the fort.

Every September, living historians bring the fort to life during Cavalry Day.

After Custer left Camp Supply in November 1868, he wound up at Washita, so I’m bound for the somber Washita Battlefield National Historic Site near Cheyenne.

When I first visited the Washita in the 1980s, little could be found here. In fact, the Black Kettle Museum in town served as a visitors center. The battle site didn’t become part of the National Park system until 1996.

The park is still remote and still fairly primitive, but the new visitors center opened in August 2007. Here, you can start off by watching the 27-minute film Destiny at Dawn: Loss and Victory on the Washita, then tour the small museum before driving to the battle site. The 1.5-mile trail, open dawn to dusk, is an easy, but rather sad, hike. Guided tours are available Saturday mornings from Memorial Day until Labor Day.

Just before a snowy dawn on November 27, 1868, Custer’s 7th Cavalry attacked the Southern Cheyenne village of Peace Chief Black Kettle. The fight was controversial in 1868, and remains so to this day. Custer claimed 100 Indians killed; Cheyennes said the number was much less. Army casualties were reportedly light, though the ancestors of Maj. Joel Elliott’s detachment might disagree with that claim. Elliott and his men were killed by Cheyenne, Arapaho and Kiowa warriors coming to aid Black Kettle and his Cheyenne.

The Washita affair might not have been as unholy as the Sand Creek massacre four years earlier, but the “battle” remains almost as disturbing.

“I don’t know whether the U.S. government desires to look at this affair in a human light or not,” Indian agent Ned Wynkoop said in December 1868, “but if it only desires to know whether if it was right or wrong, I must emphatically declare it wrong and disgraceful.”

Now that I’m totally depressed, I need something lighter. How about Roman Nose State Park?

All Eyes on Roman Nose

One of the state’s original seven state parks near Watonga, the park is set in a beautiful canyon with plenty of hiking, horsebacking, swimming, biking and fishing opportunities. You can even golf on an 18-hole course. Most important, you can camp in a teepee that has electricity.

After a series of raids in 1875, Henry Roman Nose became one of the Southern Cheyennes imprisoned in St. Augustine, Florida. He was eventually sent to Hampton Institute in Hampton, Virginia, then to the Indian boarding school in Carlisle, Pennsylvania, and he finally returned home in 1881 as a tinsmith. He became a Cheyenne chief in 1889 and continued the fight to preserve the Cheyenne way of life until his death in 1917.

Anadarko isn’t really Cheyenne country, but I’ll include it on this trip anyway. After all, they do call it the “Indian Capital of the Nation”—with pretty good reason for doing so.

Anadarko offers the National Hall of Fame for Famous American Indians, an outdoor garden that displays more than 40 bronze busts of Indians, from Cherokee syllabary creator Sequoyah and the Powhatan chief’s daughter Pocahontas to Lakota holy man/warrior Sitting Bull and Apache medicine man/warrior Geronimo. Sac and Fox olympist Jim Thorpe and even Cherokee humorist Will Rogers get their due, but I’m hard-pressed to find a Cheyenne.

That’s all right, because the nearby Southern Plains Indian Museum has three galleries showcasing the myriad art and artifacts from not only the Southern Cheyenne but also the Kiowa, Comanche, Kiowa-Apache, Southern Arapaho, Wichita, Caddo, Delaware and Fort Sill Apache. In fact, Anadarko’s a pretty good art town, with galleries such as the Gallery of Art at Anadarko and McKee’s Indian Store & Susan Peters Gallery.

You’ll even discover a couple of wineries here. But … well … I’m sorry, call me a wine snob; I’m just not willing to try Oklahoma wine.

Trying Oklahoma hamburgers, that’s another story. We’ll get there directly.

I’m off to El Reno to end this trail.

Fort Reno, of course, was established in 1875. Today, the post is part of the U.S. Department of Agriculture’s Grazinglands Research Laboratory. Fifteen of its buildings are on the National Register of Historic Places, including a nice museum, and the historic post cemetery is worth a visit.

So are the hamburger joints in town. This is “onion-fried burger” territory. You just have to pick between Sid’s Diner, Johnnie’s Grill and Robert’s Grill.

Robert’s is the oldest, dating to 1926, and likely the smallest (the counter seats 14). Sid’s might be the new kid on the block (founded in 1990), but the hundreds of pictures on the walls tell me that owner Marty Hall is a mighty big history buff. Then again, Marty learned to fry up those delicious onion burgers at Johnnie’s, which certainly hasn’t lost its touch since Marty moved across town. Well, I can’t pick. Eat at them all.

Finding a hamburger haven on the Cheyenne tour isn’t a surprise. After all, El Reno happens to be on another historic trail—one linked to cattle.

I won’t say that the Chisholm Trail is more important than the Cheyenne Heritage Trail. It’s just better marked… and better promoted.