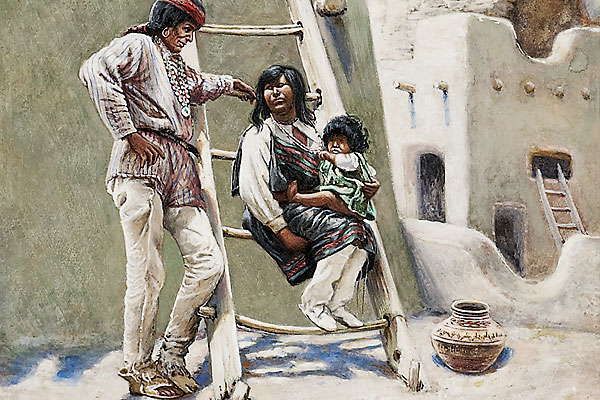 Cincinnati artist John Hauser left behind few letters and no diaries, making biographical details of his life and work sketchy at best.

Yet an important discovery of a pair of photographic albums in Indiana has shed light on this obscure figure. On September 10, 2010, Cowan’s auctioned off these albums for a $57,000 bid as the top-selling lot at its auction of American Indian & Western Art.

E.P. Harris and Jerry Glenn run the John Hauser Project in hopes of finding more primary documents tied to the artist. They know of some family photos, a handful of articles in the Cincinnati Gazette and other local newspapers, a few handwritten letters in the Cincinnati Art Museum and rare inscriptions written on the reverse of Hauser’s paintings.

Glenn is an Arizona native and an expert on Pueblo pottery and American Indian paintings; Harris became interested in Hauser when he and his wife bought the house in Cincinnati’s gaslight area that the artist and his wife Minnie had built in 1904 and named “Pine Ridge,” after the Sioux reservation in South Dakota.

The discovery of these photo albums may prove fruitful for the book on Hauser the two are hoping to someday publish. After all, these albums appear to document an 1893 trip to Taos, New Mexico, that Hauser undertook with the famous artist Joseph Henry Sharp. Forrest Fenn shared what is known about their trip in Teepee Smoke, his updated biography on Sharp.

The artists traveled by buckboard to visit the Taos, Tesuque and San Juan Pueblos. They arrived at San Juan just in time for the annual feast of San Geronimo, and more than 50 photographs from this celebration are included in the albums. Some of those photos match Sharp’s Harvest Dance of the Pueblo Indians of New Mexico, housed at the Cincinnati Art Museum. We can tell that Hauser utilized many of these photos for creating his works of art, and two wonderful examples of this were included in Cowan’s auction: Love Among the Pueblos and Indian Portrait. A direct tie to the artist is apparent in the photo of him leaning over Kit Carson’s grave.

The album’s inclusion of Flat Iron, Chief Garfield, Standing Bear and other Indians who participated in Buffalo Bill’s Wild West show during the Chicago World’s Columbian Exposition in 1893 provides an interesting clue to the artists’ whereabouts. We know that a painting of Sharp’s was selected for exhibit at the fair, but we have no proof that either him or Hauser attended. Yet these photos suggest at least one of them, if not both, likely went to the fair before heading to New Mexico.

Thanks to these impressive photographs, the John Hauser story is finding its heartbeat. The auction hammered in for a total of $730,850.