The Seeds of Navajo Soul 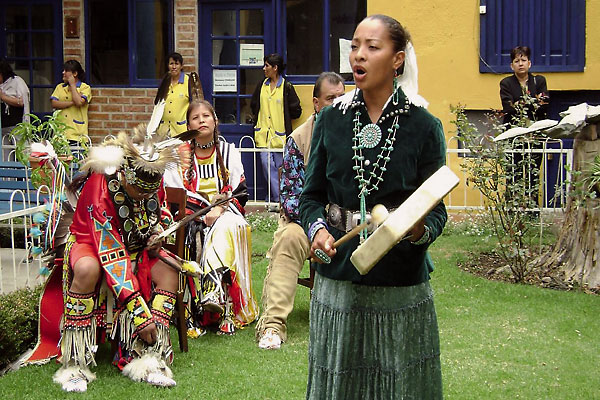 Her voice is beautifully melodic and haunting, and the words are in a language few people understand, but there is no mistaking the heart and soul of what Radmilla Cody is singing.

She calls her music “Navajo Soul,” to recognize the contributions from her parents—a Navajo mother and a black father. Her maternal grandmother’s love and guidance—and the chores she gave Radmilla as a young girl—also developed the singer’s talent.

“My first audience was in the sheep corral” about 25 years ago, Radmilla says. “It was my duty to let the sheep out in the morning, tend them all day and bring them back in the evening. I’d be off in the rocks, singing in my own imaginative world, and the sheep would just sit and listen.”

When Radmilla was in her early 20s, her singing helped her win the 1997 title of Miss Navajo Nation (marking her as the first biracial Miss Navajo). Yet she hoped folks off the reservation would also find her blend of two languages and two cultures appealing.

She had little idea how far her music would take her. Since her first album was released in 2000, she has performed in Japan, South America, Germany, Russia, the Netherlands and Kenya. “That’s been truly an honor, to sing to other cultures,” she says. “We’re all interconnected. We tend to forget that.”

She sings the songs on her four albums mostly in Navajo—combining traditional music with contemporary sounds—but the words being sung aren’t always what matter most to audiences.

“When I listen to music in another language, it’s amazing how you can connect. You can feel how the singer is feeling,” she says. “The songs are stories. You may not understand what I’m saying, but you can feel what our people are all about, what we stand for.”

She’s particularly pleased that so many young people have gravitated to her recordings. “I’m happy when young people who don’t know the Navajo language are learning my songs,” she says. “It preserves the language and instills in the young ones that they should be proud of who they are. For the non-Navajos, I think my songs help them feel how Navajos feel—all I am is the instrument.”

Her Navajo grandmother raised Radmilla in a home outside Flagstaff, Arizona, that had neither electricity nor running water. She learned early on how the sheep provided for the family, and that you ate what you grew or raised. Her grandmother taught her traditional Navajo ways and the Christian faith. Singing wasn’t new to this family. Radmilla can still hear in her mind her great-grandfather, a medicine man, singing as he worked.

As an imaginative kid, Radmilla learned how Navajos have songs for all the animals in their lives, to show appreciation and gratitude. While she learned those lyrics, her uncle Herman started writing songs for her to sing, mainly secular versions of ceremonial hymns. Her parents taught her music that they loved, ranging from Blues to Jazz to Hip-Hop. By the time Radmilla was a teenager, blending all those sounds came naturally to her.

But her songs also reflect a life that hasn’t always been on a positive path. In 2002, she was sent to an Arizona prison for not reporting a boyfriend’s drug dealings. By then, she knew the pain of domestic abuse. “When I was in prison, I wrote about my experiences. That’s where ‘Tears’ on my Spirit of a Woman album came from,” she says. She sings that song in English.

Radmilla admits the abuse she suffered and the time she spent in prison left an imprint that has become a focus of her work. “I use my personal experiences and my songs to educate our youth and reach out and encourage our women in abusive relationships,” she says. “Teen dating violence is very prevalent in our schools, and I’m trying to get people to understand what we can do to be part of change.”

Every February, she teams up with the Navajo Nation, its domestic violence organizations and the Arizona Coalition Against Domestic Violence to tour high schools on and off the reservation to discuss problems of violence in teen dating. This was the fourth year of the program “Strong Spirit: Life is Beautiful, Not Abusive.”

“I had to break down my ignorances and gain understanding where I went wrong,” she says. “Telling my story helps others toward understanding, toward acknowledging the signs. If power and control are constantly part of a relationship, that means trouble. I want the kids to know they’re not alone.”

She also wants them to know a life like hers can be turned around. Angela Webb is making a documentary on the singer’s life, titled Hearing Radmilla, and in 2010, Radmilla was featured in NPR’s “50 Great Voices” series. A recent college graduate, she intends to get her master’s degree in sociology.

Yet even with the new, tradition stays strong with the singer. She still lives in the same house of her youth with her 95-year-old grandmother Dorothy.