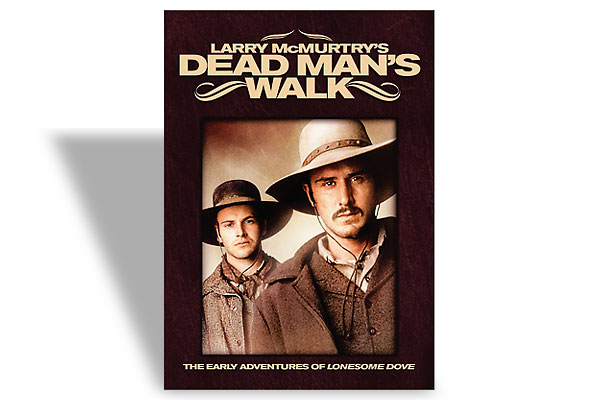 Both the prequel and the sequel to CBS’s Emmy award-winning Lonesome Dove miniseries are now available in two-disc DVD packages.

Neither 1996’s Dead Man’s Walk nor 1995’s Streets of Laredo offer anything other than the shows, each of which runs about four and a half hours.

Streets of Laredo does nothing to lighten up dour old ex-Texas Ranger Woodrow Call (James Garner), who frankly could use a little cheering after loosing his buddy Augustus McCrae (Robert Duvall) in the previous story. Larry McMurtry, who coscripted this miniseries from his own novel, is possessed of no such notion. Call’s single mission in the story is to track and take down Joey Garza (Alexis Cruz), a young Mexican killer and spectacularly accurate sniper who is writ about as evil as anybody in the McMurtry stories, including Buffalo Hump.

At no point does Call manage to get anywhere near Garza, who literally runs rings around him and even tricks him into taking a couple of bullets. Garza gets to kill and hang, in that order, the renowned Judge Roy Bean (Ned Beatty). In fact, Garza is so singularly murderous that he takes on mystical dimensions, as does the entire tone of this chapter of the Dove series, helped in no small part by Sonia Braga as Garza’s mother Maria, who seems equal parts Mother Courage and loony bruja.

Wes Studi is very fine as the Kickapoo tracker Famous Shoes, who is one of McMurtry’s finest, and funniest, creations, and who also appears in Comanche Moon.

Sam Shepard gives Pea Eye Parker a measure of woe that comes new to the character.

McMurtry couldn’t have done better than Garner for Call, but Sissy Spacek isn’t up to the challenge of playing Lorena Parker. Hers is not a demanding role, but Spacek doesn’t hit it with any conviction, and the movie falls short, especially since she occupies so much time in the story.

Seen out of the context of its amazing predecessor, Streets of Laredo would seem like a kind of experimental Western, an exercise in nihilism and brutality, of which there are others in this class. But it’s not really what we look for in a Dove film.

Dead Man’s Walk has a different flavor, as a roadshow version of Lonesome Dove. In the part of McCrae is David Arquette, who is no stranger to full-tilt scenery chewing. Lucky for him he’s usually pretty entertaining at it, and considering that Jonny Lee Miller is giving out so little energy as Call, Arquette naturally compensates.

McCrae and Call, fortunately, don’t get the stage to themselves here, because Tim Blake Nelson, who could silly Arquette to a frazzle, is aboard, as are Keith Carradine as Bigfoot Wallace and Harry Dean Stanton as Shadrach in the badger hat he was born to wear. Stanton doesn’t make it past the 90-minute mark, but he’s so good he brings up the entire enterprise by several notches.

What doesn’t help is that a major portion of the miniseries is taken up by the long slow walk from Texas to Santa Fe by the Texans and, later, their captors. If ever a picture needed a few judicious edits, it’s this one; the dreadful trudge in this pre-Civil War episode almost seems to be happening in real time.

Lucky for McCrae and Call, but less so Old Bigfoot who doesn’t survive a firing squad, the final portion of the drama is out-sillied by the leprous Lady Lucinda Carey (Haviland Morris), a veiled opera singer with a retinue and a large boa constrictor named Elphinstone. When the Comanches, led by Buffalo Hump (Eric Schweig), are poised to strike, Lady Carey takes off everything but her veil, wraps the reptile around her shoulders and lets wail with a high-end excerpt from Verdi’s Nabucco.

Who knows if it was the snake, the butt-nakedness, the leprosy (much nastier in the book) or the singing that did the job, but Buffalo Hump and his boys get real gone. My opinion? I’m opting for the singing.