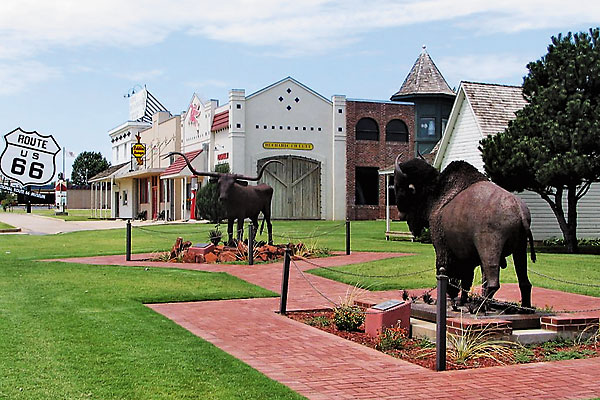 Dr. L.V. Baker, a fourth-generation native and owner of Safari B Ranch, believes Elk City to be as unique as the residents of his exotic ranch.

Elk City, Oklahoma—population 13,000—is close to the now-retired Great Western Cattle Trail of 1874-88. The city’s roots date back to 1901, when it was a shipping hub at the end of the Choctaw, Oklahoma and Gulf Railway line (dubbed the “Choctaw Route”).

Baker, a retired M.D. of general practice, shares his 4,000-acre ranch with his wife Pat during the summer. Their ranch is home to nearly 3,000 Texas Longhorns as well as exotic animals  such as Chapman zebra from South Africa, Blackbuck antelope from India and Sika deer from Japan and Taiwan.

Baker serves as the chairman of the Museum Board in Elk City, a town he dearly loves. “People are sincere here, and that’s important to me,“ he says. Here are some of the origins of his pride:

Best Spot to View Wildlife: Wichita Mountains Wildlife Refuge. This is where the Bakers purchased three cows, a bull and a steer—the start of their diverse animal family.

Old West Attractions: The Old Town Museum Complex is your best bet, costing only $5 for adults! Some of the highlights include the Anadarko Basin Museum of Natural History, housed in the former 1928 Casa Grande Hotel. Be sure to chat with Wanda Queenan at the National Route 66 Museum (check out the kachinas from the trading post she used to own nearby). And you’ll find a replica pioneer town, with some original buildings, at the Old Town Museum.

Popular Local Event: PRCA Rodeo of Champions at Beutler Brothers Rodeo Arena. Held since 1938, the rodeo takes place every Labor Day Weekend. As part of the festivities, the Elk City Chamber of Commerce hosts a free Country music concert. (Plus, check out the Beutler Brothers rodeo memorabilia at the Old Town Museum.)

Event to Attend in December: Victorian Christmas at the Old Town Museum features Victorian decorations, costumed hosts and live entertainment during the month of December.

Town Goof: Any Elk City blooper reel will have to feature the marker at Broadway and Adams erected in 1937 by deputy trail brand inspector P.P. Ackley. The marker reads: “Going up the Texas Chisholm Trail.” Yet Elk City is along the Great Western Cattle Trail.